News ALL IN THE NAME

Kripke enters stage right – and Big Bang Theory actor is thrilled about it! 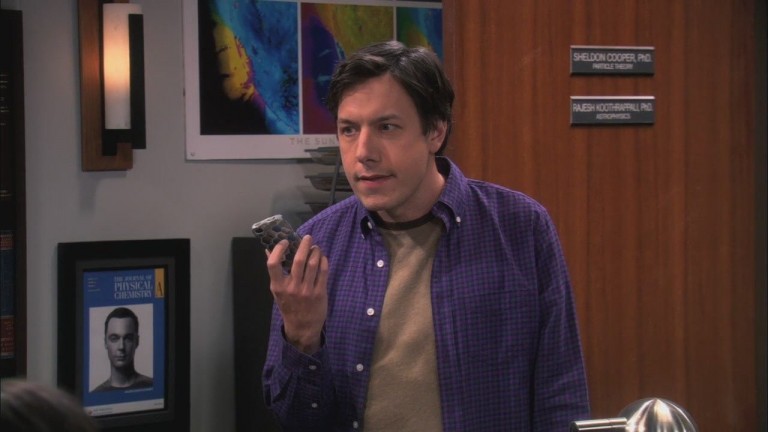 If when sizing up the mile handicap at Ripon on Thursday you find yourself thinking, ‘I know that name from somewhere’, it’s because you probably do.

For the David Barron-trained Kripke takes his name from a character in The Big Bang Theory, the endlessly-repeated show on E4 and arguably the world’s biggest sitcom with millions of fans worldwide.

The two-legged Kripke, a physicist and on-off friend of lead character Sheldon Cooper, is played by John Ross Bowie, who was thrilled to hear his character had inspired the name of a racehorse – especially a winning one.

Three-year-old Kripke has his fifth start on Thursday, having won at Southwell last month and finished second and third (twice) previously.

Kripke is not the only Big Bang Theory character to have been honoured in a four-legged form by Barron and his wife Christine, in whose silks Kripke runs.

“My husband and I are big fans of the show,” she said. “We watch endless episodes of The Big Bang Theory and it doesn't matter when it's on. We watch repeats and have watched it for a long time.

"We also had from the show horses we named Wolowitz and Koothrappali, who wasn't any good, but Wolowitz was a good horse for us. We try to give a good name to a good horse. Sometimes it doesn't work out. From what they look like at yearlings doesn't mean they'll progress.

"Kripke has taken a bit longer, but I think he'll be all right – he looks all right. We hope he's one to look forward. We had wanted to call a horse Amy Farrah Fowler after another character, but that name was already taken.”

Asked if Bowie would be welcome to their North Yorkshire yard, she replied: “I'm sure David would be delighted to meet him; it was David who got me into the show! We don't get to watch a lot of television but I'd say it's our favourite programme."

Bowie, 46, is an American actor and comedian who has played Kripke from series two of the show – E4 are currently airing new episodes from series 11 – while he is also starring in newer sitcom Speechless with British actress Minnie Driver.

He was good enough to take time out to answer a few questions from the Racing Post.

Racing Post Were you intrigued to hear a racehorse in the UK has been named after Kripke?

John Ross Bowie Extremely! I'm always shocked at the reach the show has. There's also a pug on Instagram named Barry Kripke, and I am generally pleased with this trend of naming animals after my most famous character.

RP . . . and pleased to hear he had won his first race on just his fourth run?

JRB Very impressive, although it's pretty ironic that he's quite that much of an athlete.

RP Knowing the two-legged Kripke better than anyone, what sort of personality and traits would you imagine his four-legged counterpart to possess?

JRB I assume the equine Kripke is extremely gifted in his field and nigh impossible to be around.

RP His owner has also named racehorses Wolowitz and Koothrappali – what should she choose next?

JRB I'll suggest Stuart, as played by my friend Kevin Sussman. But a mare named Amy is also a pretty funny idea.

RP Do you have an interest in horseracing?

JRB I've been to the track a few times, both in LA and in New York – they used to have a place called Hollywood Park in Inglewood, which is in the southern part of Los Angeles County, where you could go watch the horses and then there would be a band on Friday nights. A few summers ago I won a few bucks on a box trifecta and then saw Devo!

RP What’s it like to be part of a show with such a huge following, not just in the US but overseas?

JRB It's crazy, and I'm always pleasantly surprised by its international following. I was recognised at a Nando's in Edinburgh one time – it's astonishing how many people watch Big Bang.

RP What other programmes/projects are you currently involved in, or have in the pipeline?

JRB I've been working on a TV show called Speechless that hasn't started airing in the UK yet, despite our British lead, Minnie Driver. It's a really funny, smart and sweet show; I would love for more people to see it. In the meantime, British viewers can catch me on Big Bang, or that time I was on Death in Paradise.

FIRST PUBLISHED 1:32PM, APR 18 2018
I assume the equine Kripke is extremely gifted in his field and nigh impossible to be around