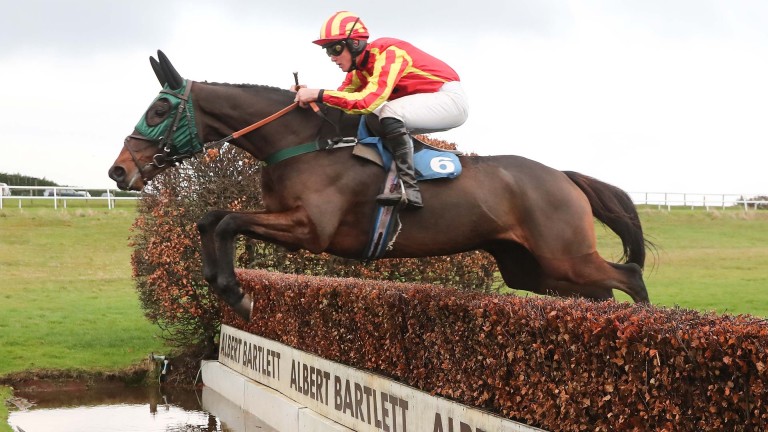 Much-improved chaser Top Ville Ben is set to go on trial for the Magners Cheltenham Gold Cup after an impressive victory at Wetherby last month.

The eight-year-old was in the Cheltenham Festival showpiece when entries closed on Tuesday and is poised to step out of handicap company after earning a 10lb rise in the BHA ratings with his win in the Rowland Meyrick Chase.

Trainer Phil Kirby said: "He'll have an entry in the Sky Bet Chase, because that was originally the plan. But he'll also be in the Cotswold Chase and the Denman. He went up to 164 after Wetherby, so it's probably going to be one of Cheltenham or Newbury.

"He has to back it up in one of those races but if he does, he'll have to have the Gold Cup entry.

"He's going the right way, he's highly rated but it's nice to have one rated high enough to think about running in those races."

Kirby was delighted to see the former tearaway relax so well on the way to an eight-length win at Wetherby.

"It's all coming together," the trainer said. "He's getting more relaxed and more settled all the time. At one point he was a lunatic in the paddock, now he walks round like he's half asleep."

Popular stablemate Lady Buttons has been entered for the Queen Mother Champion Chase but is not certain to take that option.

"She'll also be entered in the Mares' Hurdle and we'll see," Kirby said. "I know the owners would like to run in the Champion Chase but we'll do whatever's right at the time – the Champion Chase could be unwinnable and I like to be in races I think I can win!"

Lady Buttons landed a Listed mares' chase at Doncaster last month and is set to bid for a repeat of last year's win in the Grade 2 Yorkshire Rose Mares' Hurdle back at the track on Sky Bet Chase day, though Kirby is also considering the Opera Hat Mares' Chase at Naas on February 8.

FIRST PUBLISHED 2:06PM, JAN 7 2020
He's going the right way, he's highly rated but it's nice to have one rated high enough to think about running in those races