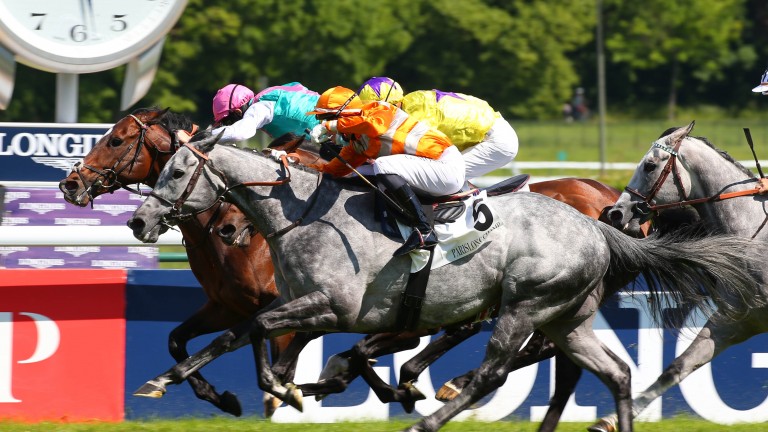 Skalleti (orange silks) and Gerald Mosse hunt down the British challenge of Tilsit (pink cap) and My Oberon (yellow silks) in a desperate finish to the Prix d'Ispahan
Â© APRH / QUENTIN BERTRAND
1 of 1
By Scott Burton UPDATED 8:19PM, MAY 30 2021

Every hour of sunshine that dried out the Longchamp turf was against him and he lost a shoe on the descent but Skalleti showed that the good horses find a way to win, denying the British challengers Tilsit and My Oberon in the final strides.

It capped a remarkable afternoon for Marseille-based trainer Jerome Reynier and his principal supporter Jean-Claude Seroul, who also made off with the Group 3 Prix du Palais-Royal thanks to Marianafoot, as well as the big Quinte handicap for good measure.

Skalleti has been one of the best horses in France not to win a Group 1 over the last couple of seasons, his gelded status as much of a hindrance in race planning as his preference for a monsoon.

"In different conditions he has shown himself one of the best older horses in Europe and he has proved himself on ground other than soft," said a relieved Reynier after the judge called Skalleti the winner by a head and a short neck.

"Everyone has been hung up on him winning a Group 1 but that was never the sole priority – we really wanted to build a career with this horse. As this was the last race left for him we had to take a risk."

Skalleti made Addeybb pull out all the stops in the Qipco Champion Stakes last October and a return visit to Ascot is now the main order of business for Reynier.

"His main target for the year is to take his revenge in the Champion Stakes so we'll let him down for a while. The big regret is that logistically it would have been too hard to get him to the Tattersalls Gold Cup [last Sunday] at the Curragh."

The first four races on the card had obeyed the Longchamp lore that when the ground gets quick and the rail is at its innermost, the leaders do not come back.

In the circumstances Skalleti's need to be held up was arguably as much of a handicap as the rapid underfoot conditions. 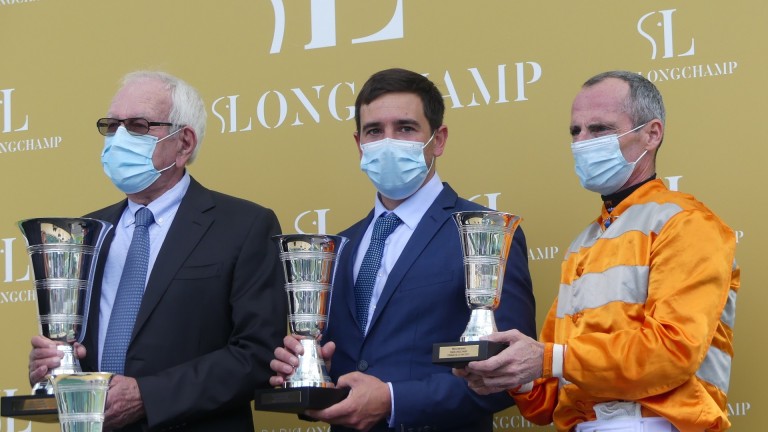 "It's not his ground and he was less balanced than was ideal but he was still the best," said Mosse. "When he first picked up he was a little at sea for a few strides and I said to myself that I mustn't give up on him, we had to stay in contact and that the last 200 metres would be his best. I was relying on him."

Mosse was handed a 16-day ban for using his whip eight times, a punishment that is accounted for by it being his second offence and the doubling effect of a Group 1.

Tilsit had his odds cut by Ladbrokes to 16-1 (from 33) for the Queen Anne Stakes, a race which Charlie Hills and the Juddmonte team will take a long look at after a career-best in second.

"He's run great and at least now he's proved he's a Group 1 horse," said Hills. "The winner is a very good horse. He tried very hard and we’ve no complaints. He really put his head down and I'm very proud of the horse."

Of a challenge for the Queen Anne on June 15, Hills added: "A stiff mile at Ascot is what he wants and he’s proved himself on a straight track, so that’s a plus. Fast ground is also an advantage so we'll certainly have a good look at that race as long as he’s in good form in a coupe of weeks' time."

William Haggas was also vindicated in braving the rigours of Covid quarantine and Brexit to get My Oberon to the start, as the Tsui family's homebred left behind his effort in the Lockinge.

"What a nightmare it was [to get him to France]," said Haggas. "The soft ground at Newbury wasn't his thing at all but the forecast [for Paris] was pretty settled and very dry and that's what tempted me really. Skalleti and [non-runner] The Revenant are both very good on soft ground so I thought we might try to catch them out in a Group 1 race.

"It was a really commendable run and for a minute I thought he was going to win. We hope Group 1s are his future. I've no idea what to do next but he's a lovely horse."

FIRST PUBLISHED 3:36PM, MAY 30 2021
In different conditions he has shown himself one of the best older horses in Europe and he has proved himself on ground other than soft

Solid Stone's bravery in a battle shines a sad light on Al Aasy's shortcomings Bolshoi Ballet knocked out of Niel by stewards as Deep Bond powers home in Foy Gelded Al Aasy should be close to his best on return says William Haggas 'We're keen to have a crack' - Alenquer set to take his chance in the Arc Bayside Boy enters Classic fray after edging out the Queen's Reach For The Moon Prix Foy: local ace Skalleti in pole position as he prepares for Champion Stakes