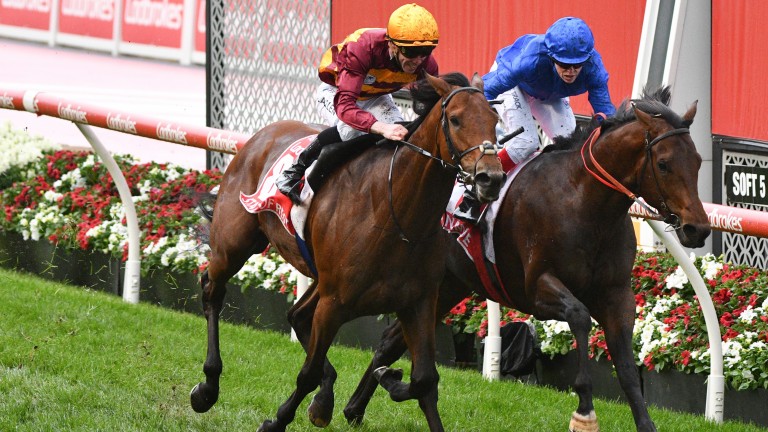 Joseph O'Brien admitted he was getting edgy as the stewards' inquiry to the Ladbrokes Cox Plate lingered on for more than 20 minutes, but it was worth the wait as State Of Rest was allowed to keep the race following a protest from Craig Williams on the runner-up Anamoe.

It was, perhaps, O'Brien's most audacious Australian adventure. He has won two of the last four Melbourne Cups, but he didn't have to jump through half as many hoops to win those. This was a reward for patience so it was fitting that he had to wait so long after the race to be officially announced the winner of it.

Almost a year to the day since State Of Rest finished fifth in an average Vertem Futurity at Doncaster, the son of Starspangledbanner burst through a gap towards two furlongs out and bravely fended off the challenge of Anamoe to land Australia's most prestigious race by a short-head under Cork native Johnny Allen.

But the drama did not end there. Williams immediately signalled his intention to protest upon dismounting from Anamoe for interference suffered aboard the Godolphin-owned runner inside the final furlong and the inquiry began.

It took well over 20 minutes to sort out and O'Brien said he was getting worried the longer it went on. 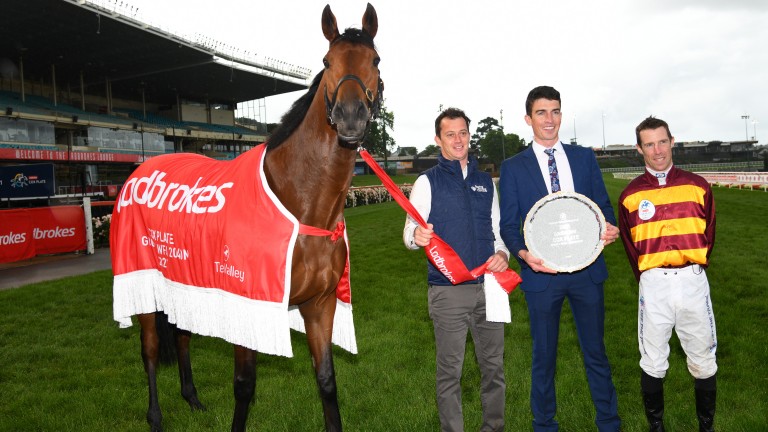 State Of Rest: connections pose for a photo with the Cox Plate winner
Getty Images

He said: "It was an anxious wait all right. We were pretty confident that if the inquiry had been anywhere we were used to racing in we would have been fine, but it went on for so long we were starting to get a bit edgy and nervous. I suppose the only thing was there was nothing I could do from where I was!

"Johnny and Mark Power handled it all very well and we're very pleased that they came to what we thought was the right result. Johnny gave the horse the most fantastic ride."

O'Brien heaped praise upon the team who came together to make the journey to Moonee Valley for the $5 million Group 1 possible, describing the effort involved as mammoth.

The trainer added: "It's just fantastic. I'm delighted for the owners, the manager Richard Ryan and Jim Coburn. All the credit has to go to Mark Power and MJ Doran, though. The two lads travelled down to Australia and been with the horse for the last number of weeks. Mark Hackett as well, who organised the whole trip.

"It was a mammoth effort from everyone, between all the vets who had to do all his scans and trots up and everything that was required. All the team here at home as well, those who looked after him through his quarantine over here. It was a huge team effort and I'm just so delighted that we managed to pull it off. It was a very special day for all of us."

State Of Rest was bred by Dermot Cantillon and Meta Osborne's Tinnakill Bloodstock and their son Jack tried to put the achievement into words.

Cantillon said: "I would always have in my head that the Melbourne Cup is Australia's greatest race and Australia's best race is the Cox Plate – so it is obviously a thrill for us to have bred a winner of it.

"It's a great thrill in particular for my dad, who has always had a special connection with Australia, having lifted the Melbourne Cup twice with Vintage Crop and Media Puzzle as racing manager for the Smurfit family.

"More than anyone I am delighted for him, he has always had this incredible affection for the amazing sport that is Australian racing and for him to win Australia's best race as a breeder is a great testament to a career of hard work."

See the full result of the 2021 Ladbrokes Cox Plate

FIRST PUBLISHED 12:34PM, OCT 25 2021
It was a mammoth effort from everyone, between all the vets who had to do all his scans and trots up and everything that was required