By royal appointment: the Queen drops in to say hello to Frodon at Nicholls yard 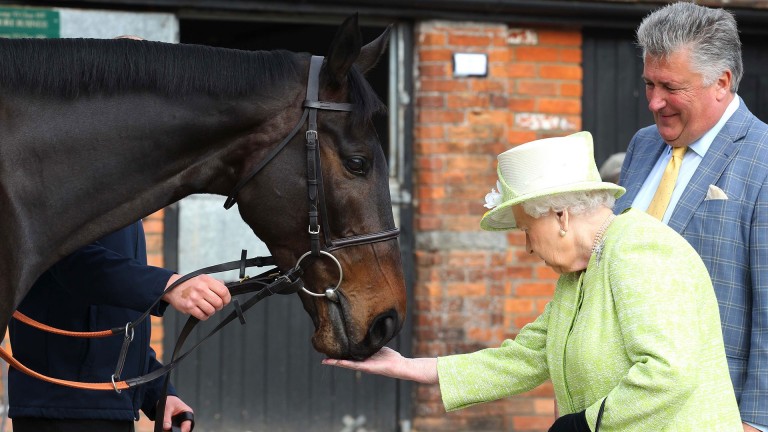 The Queen fed carrots to Cheltenham Festival winner Frodon when she was a special guest of trainer Paul Nicholls and his team at Ditcheat on Thursday.

Her Majesty patted the Ryanair Chase winner and gave him his favourite treat after dropping in at the ten-time champion trainer's yard in Somerset.

Frodon's rider Bryony Frost was introduced to the Queen along with stable jockey Harry Cobden.

The Queen was in Somerset to open the Queen Elizabeth Music School in nearby Bruton and chose to start the day at Ditcheat, where she spent time with Nicholls and his family, as well as with landlord Paul Barber and assistant trainer Harry Derham. 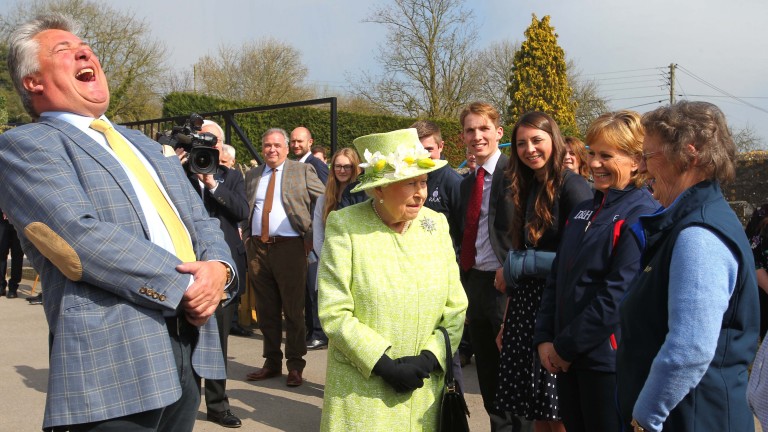 The Queen jokes with Ditcheat team members during her visit, including Bryony Frost (third right)

"She came in and met Mr and Mrs Barber and was also introduced to Paul and his family," said Derham. "She met six horses including Frodon, Clan Des Obeaux and Cyrname."

The Queen paid particular attention to Frodon, who rallied from a seemingly losing position for Frost at Cheltenham a fortnight ago, earning a place on the front of several national newspapers.

Although the Queen's colours are more often associated with the Flat, she has enjoyed some success in jump racing, notably with the Nicky Henderson-trained Barbers Shop, while the Queen Mother's love of the jumps was firmly rooted in the exploits of horses such as Devon Loch and Whitbread Gold Cup winner Special Cargo.

As well as meeting the equine stars of the Nicholls team, the Queen was also given a presentation by BHA chief medical adviser Dr Jerry Hill and researchers at Bath University, who are studying fall rates in jump racing and the prevalence of spinal injuries.

The BHA is participating in the research projects in partnership with three universities, with the aim of improving rider safety in all equestrian disciplines.