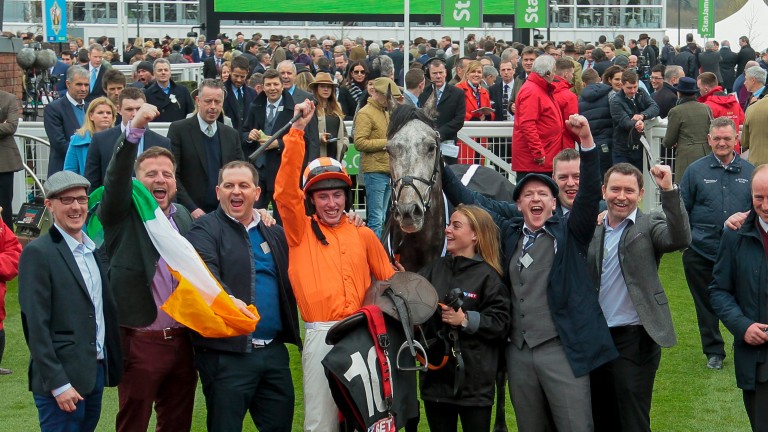 John Boylan, second from left, pictured with Labaik after his victory in the 2017 Supreme Novices' Hurdle
Mark Cranham
1 of 1
By Richard Forristal UPDATED 6:49AM, APR 12 2019

Gordon Elliott has defended running Labaik at the 2017 Punchestown festival when called to give evidence in the long-running Criminal Assets Bureau (CAB) high court case against the horse's majority owner John Boylan.

Prior to proceedings getting under way in Dublin on Thursday, Elliott was congratulated by Ms Justice Carmel Stewart for his Grand National exploits with Tiger Roll.

"Congratulations on your wonderful success. You gave a lot of pleasure to a lot of people. I’m sure you were not expecting to come in to court so soon after, but these things happen," she said.

A convicted drug dealer with 67 convictions, two of which are for drug offences, Boylan, 32, is resisting CAB’s attempts to seize his assets and he has also begun his own proceedings against the bureau, claiming losses as a result of an injury sustained by Labaik while CAB had control of his passport.

Boylan says he had plans to sell the horse after its Cheltenham success, but the sale had to be aborted after CAB seized the passport.

CAB also says an examination of Boylan’s finances shows a discrepancy of €750,000 between his income and his expenditure, all of which he is contesting. He insists his earnings are legitimate.

Having won the Supreme Novices' Hurdle at the Cheltenham Festival in 2017 at odds of 25-1, Labaik effectively refused to race in the equivalent novice Grade 1 at Punchestown the following month.

He consented to race in the Champion Hurdle three days later, finishing fourth behind Wicklow Brave, but has since been sidelined through injury.

Elliott said he never had any direct dealings with Boylan but agreed with his contention that Labaik is “quirky”.

“He was a bit of a boyo,” Elliott said. CAB agreed to allow Labaik to run at Punchestown on Elliott’s advice.

“Everyone has an opinion,” Elliott said in response to Boylan’s claim that it wasn’t appropriate to run a six-year-old novice in open company.

“But the horse was second or third favourite. And as regards age, there were six-year-olds racing in the race and he was only beaten a length and a half.”

Of Labaik’s current status, he added: “The horse is in light work and exercise. I could not guarantee that he will ever come back 100 per cent.”

Elliott and bloodstock agent Aidan O'Ryan, neither of whom has any connections with criminality, each took a five per cent interest in Labaik when he was bought in 2016. CAB’s contention is that Boylan, from Rathcoole in Dublin, bought his share through the proceeds of crime.

FIRST PUBLISHED 8:42PM, APR 11 2019
Congratulations on your wonderful success. You gave a lot of pleasure to a lot of people. I?m sure you were not expecting to come in to court