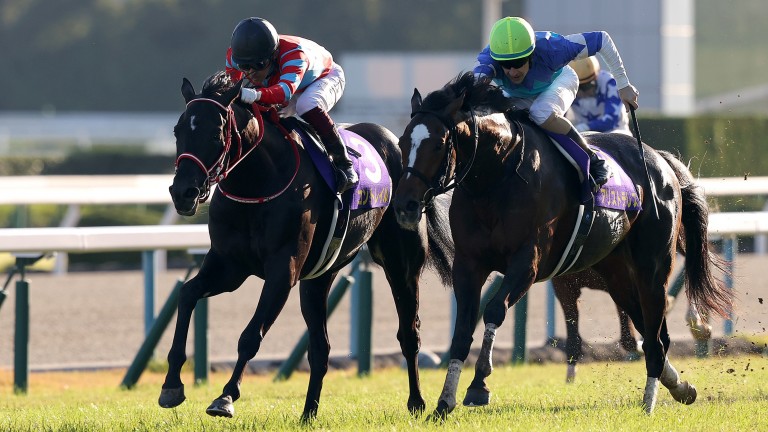 Contrail (left) holds off Aristoteles to win the Kikuka Sho
Japan Racing Association
1 of 1
By Masakazu Takahashi UPDATED 7:17AM, OCT 26 2020

Odds-on favourite Contrail became the eighth horse to complete the Japanese Triple Crown, but only the third to do so undefeated, with a narrow victory in the Kikuka Sho at Kyoto on Sunday.

He jointly heads the betting for the 2021 Prix de l'Arc de Triomphe at 8-1 alongside the Aidan O'Brien-trained Love.

Victories in the Satsuki Sho and the Tokyo Yushun set up the bid for history, but the 1-10 shot was made to work harder than the market expected by 22-1 outsider Aristoteles.

Contrail was pushed into the lead by Yuichi Fukunaga rounding the home turn but needed to dig deep to hold off a runner-up who was making his first start for trainer Hidetaka Otonashi.

Fukunaga said: "It was a harder battle than I expected and the challenger's stride was good, so I urged him on. He responded well and was not passed by the challenger, he's a great horse.

"He broke well but I couldn't get him to relax in the race. The trip was further than his optimum, so it was not his best performance but I think it was so great that he could win."

The victory means Contrail joins his sire Deep Impact and Symboli Rudolf as the only undefeated horses to win the Triple Crown.

Fukunaga added: "It's a great achievement to be another unbeaten Triple Crown winner after his sire Deep Impact and I'm proud that I was in the saddle.

"From now on, he has to battle against the older horses and I hope to help him gain the title of being the best horse in Japan."

FIRST PUBLISHED 11:20AM, OCT 25 2020
It's a great achievement to be another unbeaten Triple Crown winner after his sire Deep Impact