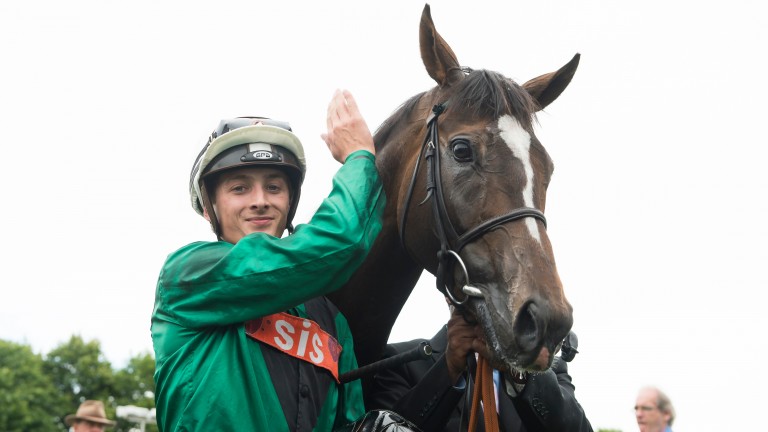 Owner Paul Jacobs has opted for a change of jockey on dual Group 1 winner Limato after what he described as a "Dubai debacle", an episode he attributed in part to cloud seeding.

Harry Bentley, who has been Limato's partner for the past year and was on board when he finished tenth of 12 in the Al Quoz Sprint at Meydan last time, described the news as a "real setback and a big hit".

However, Jacobs insists he attaches no blame whatsoever to the jockey for the Dubai disappointment, instead blaming the Emirati state's manipulation of the weather for producing unsuitable underfoot conditions.

The Henry Candy-trained sprinter pulled muscles and returned very sorry for himself on ground officially described as "yielding" in Dubai. His recovery has been slow, but he has now turned a corner according to Jacobs, whose wide-ranging review of the race has led him to take all possible steps to banish Limato's memories of the episode, including changing the sprinter's jockey.

Jacobs hopes Limato's next outing will be at Royal Ascot, but while he admits to having "one or two ideas" about who might replace Bentley he is not ready to commit.

Limato is a confirmed top of the ground horse and Jacobs regrets sending him to Dubai.

He said: "He would never have gone if I had known then what I know now. I always assumed that nobody has any control over the weather, but in Dubai I discovered after the event that they go in for cloud seeding to produce the rain they desperately need. I'm told that this was carried out in February, and then again in World Cup week, which personally I find extraordinary.

"We had a lot of rain that week, including a deluge of almost Biblical proportions, and if we had not put a lot of time, effort and money into getting him there he wouldn't have run. They were still watering until the Thursday, as I could see from my hotel, and I believe that human intervention pushed conditions over the edge."

Limato was in perfect order before the race, according to Jacobs, but conditions were too much for him.

Jacobs said: "He was pulled around in those gluey conditions, and the flight back shortly afterwards compounded the issues. He was not in good shape on his return, to put it mildly, but we are gradually rebuilding him."

Jacobs is keen to move on and said: "Every jockey has their own individual style, and horses are intelligent animals. I felt that if Harry were to get on Limato again it might trigger a reminder of what happened three months earlier and then we would have a serious problem on our hands. That's my personal feeling, and Henry is happy to go along with it."

Jacobs insists it is not a mere whim. He said: "Harry has ridden a lot of horses for me and I think we have got on, and do get on, extremely well. It's purely my interpretation of what will be best for the horse. I hope if possible he will be able to ride other horses of mine with Henry and with Harry Whittington."

Bentley could not disguise his disappointment at the news but cherishes his memories of Limato, on whom he has enjoyed his two most prestigious wins.

He said: "I'm not going to hide my disappointment, it's a real setback and a big hit for me. But it's part of the game, it happens.

"I spoke to the owner this week and he has decided to change the rider, which is completely up to him, he owns the horse and he pays the bills so it's his choice.

"It is slightly unclear as to why he made the decision but there has been absolutely no fall out – I know that phrase is thrown around an awful lot but there has certainly been no disagreement. 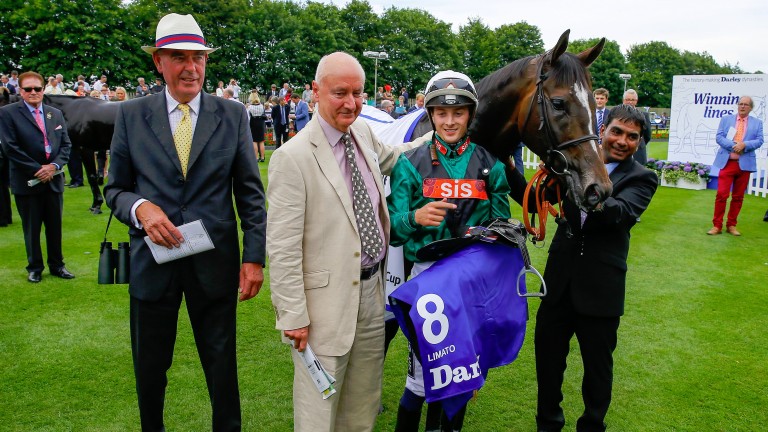 Jacobs (second left) with Limato following his July Cup success
Mark Cranham
"I will never forget the races I won on Limato and they won't be taken away from me, they're something I'll always remember. I'm freelance this year so it's exciting to be a free agent and go where I want and I'm just looking to get winners rolling."

Limato's trainer Henry Candy has reported the five-year-old is slowly working his way back to full fitness.

He said on Wednesday: "Limato had his first leg stretch on the grass yesterday since he travelled back from Dubai.

"He was in a bit of a mess with pulled muscles when we got him back home and it's been a long process putting him back together.

"I've given him plenty of rest and he looks back to his old self now. He didn't work with anything special yesterday but the manner that he did it, and his general attitude, made me think he's back in good form.

"I plan to run him next in the Diamond Jubilee and, unless anything goes wrong, the July Cup."

Who will get the Limato ride?

Doyle has had four rides on Limato and won three times, the only defeat inflicted by champion sprinter Muhaarar in Group 1 company at Royal Ascot in the 2015 Commonwealth Cup.

Doyle lost the ride due to his Godolphin retainer, with Jacobs preferring a jockey who could commit to riding Limato in every race. But the owner appreciated Doyle's efforts, as he explained after last year's July Cup success.

He said: "James Doyle also deserves credit as he made the horse really, but he has his retainer with Godolphin and I wanted a good, up-and-coming young British jockey who could commit to the horse."

Doyle is still employed by Godolphin but has fallen out of favour with Saeed Bin Suroor so, consequently, his availability may not prove such an issue.

Marquand, the 2015 champion apprentice, donned the Jacobs silks for the first time aboard Vibrant Chords at Goodwood last Saturday, conjuring a cosy win from a sprinter that had developed a frustrating run of unfortunate defeats.

Speaking after the victory the owner said: "I put Tom on because he rides out at Henry Candy's yard every week. He's lost his claim and has not been getting the rides and deserves a chance. It's a little like when I turned to Harry."

Young, British and available, Marquand has at least three attributes admired by Jacobs.

Only Harry Bentley and Doyle have ridden more for Jacobs in the past five years than Harley. And Harley did enjoy success in the Jacobs silks when partnering Regal Gait to success at Chelmsford last October.

However, his chances have surely been damaged by the news that he will partner Quiet Reflection this year, with Karl Burke's flying filly and Limato likely to be contesting the same races during the height of the summer.

FIRST PUBLISHED 1:32PM, MAY 12 2017
I believe that human intervention pushed conditions over the edge