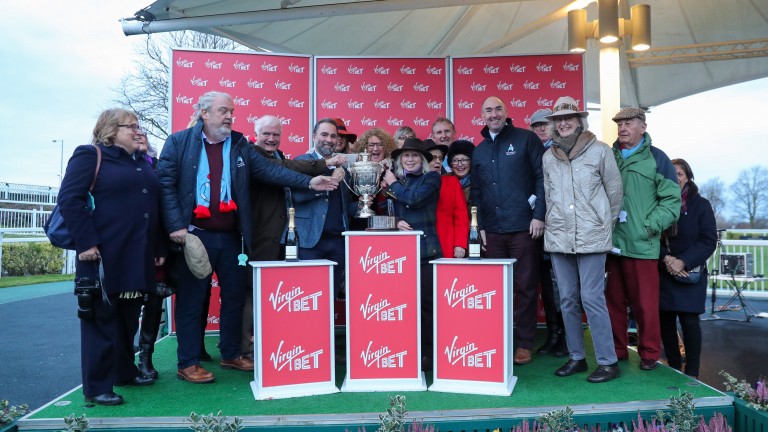 The Foxtrot Racing Syndicate in the aftermath of Hogan's Height's impressive Aintree success in 2019
Grossick Racing (racingpost.com/photos)
1 of 1
By Scott Burton 6:04PM, APR 6 2021

Aintree officials have confirmed local authorities on Merseyside have given the green light for up to six owners per runner to attend all three days of the Randox Grand National meeting.

The course will operate an amber zone, as was the case when a limited crowd of 1,000 spectators were allowed for the Becher meeting last December, with a canteen-style catering offering and space indoors and outdoors for those attending.

That is music to the ears of the 20 members of the Foxtrot Racing syndicate with a share in Hogan's Height, a winner over a little more than one circuit of the National course in the Grand Sefton at the 2019 December meeting and a first runner in the big race for trainer Jamie Snowden.

Foxtrot Racing's Dan Abraham said: "We're looking forward to having six representatives of the syndicate there and I'll be doing a draw this evening to decide which members are going to go.

"Then from the racecourse we'll do a live Zoom before and after the race to have a live chat with Jamie Snowden and Gavin Sheehan so those people who can't make it are still able to have an ownership experience at home.

"It really is a dream come true for people in a syndicate and who perhaps are only involved in one horse. The opportunity to be there is really important and, although we'd love to have more people at Aintree, I'm delighted we can have six owners."

Hogan's Height was being aimed at the National 12 months ago before the race was cancelled and, while the whole team of supporters will not be in attendance, the ten-year-old will have plenty of people cheering him on from in front of their televisions.

Abraham said: "There are 20 shareholders and, if you consider that a handful might not wish to travel, it's hopefully not too many people who'll be disappointed.

"We're very pleased to at least be able to go given how things have been and I'm sure those people there will have a fantastic day whatever the outcome." 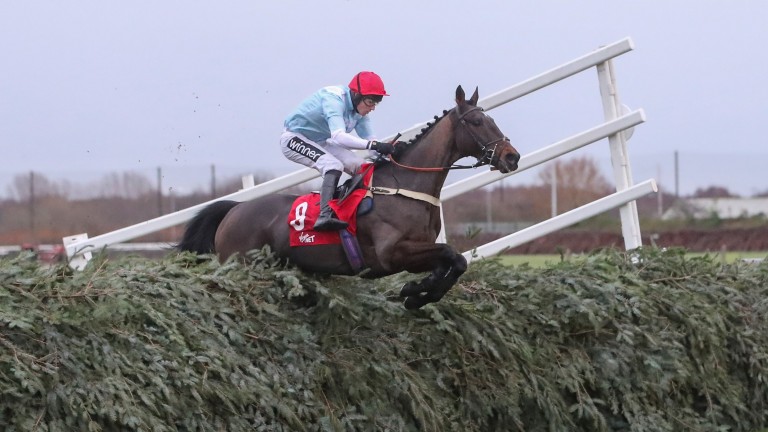 Hogan's Height is being aimed at the Grand National after his Grand Sefton win
Grossick Racing (racingpost.com/photos)

Hogan's Height was last seen finishing a distant sixth to Tiger Roll in the Cross Country Chase at Cheltenham last month, but Abraham believes even reaching the start line in the world's most famous race is a major triumph.

He added: "There are not many horses in the race who have run round the National fences let alone won around the course. He's run once and won by 16 lengths so he obviously enjoys it round there.

"I think for the syndicate, the build-up to the race is just as exciting. Because everyone has heard of the National, then it's a chance for their family, friends and work colleagues to really get behind the horse.

"That's the excitement for the syndicate, there will be a lot more than 20 people following him.

"It's a day for people to celebrate that they've got a share and own a horse, particularly one that wasn't an expensive buy and they've followed right through from a maiden hurdle to a Grand National. Having been part of that journey makes it all the more special."

FIRST PUBLISHED 6:04PM, APR 6 2021
The opportunity to be there is really important and although we'd love to have more people there, I'm delighted that we can have six owners