Hurricane Run dies at stud at the age of 14

He was the sire of Group 1 hero Ectot 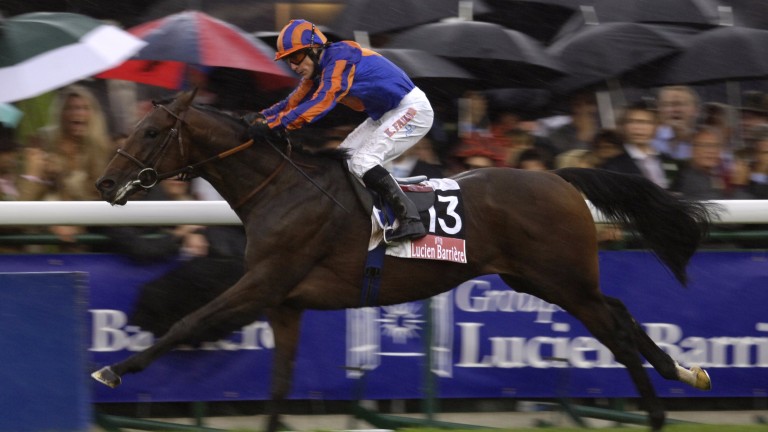 Hurricane Run, one of the most brilliant middle-distance performers of the 2000s, died on Wednesday morning after suffering complications from routine surgery.

The son of Montjeu, who was 14, had been standing at his breeder Dietrich von Boetticher's Gestut Ammerland since 2013, having been transferred from his original stallion base of Coolmore.

"It is with great sadness that we would like to announce that we have lost our great stallion Hurricane Run due to serious complications during a planned routine operation," Ammerland said in a statement.

"At this point we would like to thank all the breeders who supported him since he was launched as a stallion in Germany."

Hurricane Run was trained by Andre Fabre, originally for Ammerland, for whom he won the Prix Hocquart by five lengths and started hot favourite for the Prix du Jockey Club in 2005, the year the race was reduced to 1m2½f from 1m4f.

The new distance proved crucial for Hurricane Run as he came with a strong late run but could not reel in the speedier Shamardal. The result inspired Boetticher to send his high-class mare Lady Vettori to Shamardal in his first year at stud and the result was Lope De Vega, who would score in the Prix du Jockey Club by a wide margin five years later.

He returned in top form at four, giving Alexander Goldrun a seven-length beating to win the Tattersalls Gold Cup and seeing off Electrocutionist and Heart's Cry to land the King George VI and Queen Elizabeth Stakes.

Hurricane Run entered stud in 2007 after placed efforts in the Arc and Champion Stakes and he has supplied 29 stakes winners with two striking at the highest level - Ectot in the Criterium International and Joe Hirsch Turf Classic and Magic Hurricane in the Metropolitan Handicap at Randwick.

FIRST PUBLISHED 4:16PM, DEC 14 2016
It is with great sadness that we would like to announce that we have lost our great stallion Hurricane Run