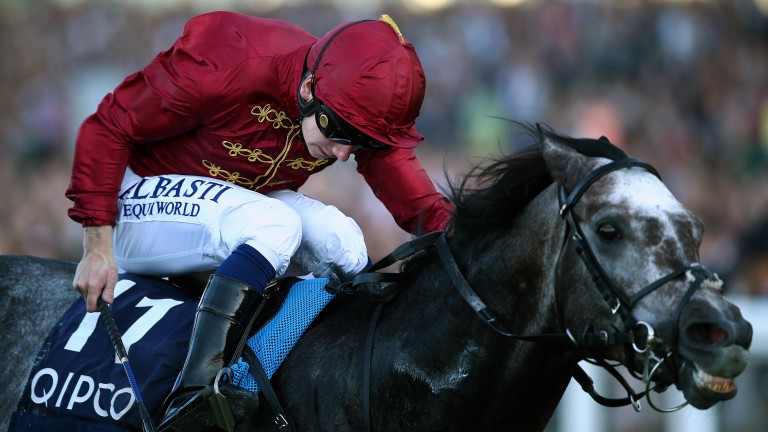 Saturday's Queen Elizabeth II Stakes hero Roaring Lion will join the Qatar Racing stallion ranks at Tweenhills Stud next year, after a possible crack at the Breeders' Cup - with a decision on that made in the coming week depending on how well he recovers from his heroics in the Qipco-sponsored race.

The four-time Group 1 winner is one of three newcomers to the roster at the Gloucestershire operation for 2019, along with Sussex Stakes winner Lightning Spear, a keeping-on seventh behind Roaring Lion at Ascot, and exciting young Australian stallion Zoustar.

David Redvers bought Roaring Lion on behalf of Qatar Racing at the Keeneland September Yearling Sale for $160,000, and the colt entered training with John Gosden.

He won his first three starts at two, including in the Royal Lodge Stakes, before being narrowly touched off by Saxon Warrior in the Racing Post Trophy.

Qatar Racing chairman Sheikh Fahad Al-Thani said: “Roaring Lion has been the horse of a lifetime for us; he has exceeded our expectations while cementing his status as the best three-year-old colt in Europe after winning four Group 1s this season.

“My brothers and I are incredibly passionate about horse racing and to have a horse like him has been a truly magnificent experience.

“His victories at Sandown and York were incredible and then to follow it up in Ireland was an amazing feeling. We always knew how good he could be, we just hoped he would prove it. He did that at York and has been incredible ever since.”

Regarding plans for Roaring Lion for the rest of the year, the sheikh added: “He has run his final race in Britain, but the Breeders’ Cup has always been an option and we are definitely not ruling it out just yet.

“Today is Qipco British Champions Day and it is fitting that we celebrate Roaring Lion’s success; he should go out as a champion no matter what happens in America.”

Roaring Lion was bred in the US by Ranjan Racing out of the Grade 1-placed Street Sense mare Vionnet, a half-sister to the high-class pair Moulin De Mougin and Schiaparelli.

He is by North America's standout turf sire Kitten's Joy, a grandson of Sadler's Wells via El Prado who is the source of 12 Group/Grade 1 winners including Eclipse and Dubai Sheema Classic victor Hawkbill and Breeders' Cup scorers Bobby's Kitten, Oscar Performance and Stephanie's Kitten.

Gosden paid tribute to his star colt, saying: “Roaring Lion is a gorgeous horse to look at. He is really a bit of a pin up boy! He stands over a lot of ground, has a great head and outlook, great neck and shoulder, and wonderful depth.

“He has all the attributes of a top-class middle-distance horse but with this tremendous turn of foot. It's his acceleration that impresses me so much. His ability to switch off and then go. The Leopardstown win off a low pace showed everyone how he can do that so well.

“It's very important in a stallion that they can take their racing. We started in February, have been hard at it since then, and he is still showing all the right signs and credentials. He's just a really lovely horse to be around and a thoroughly great character.”

Redvers, racing and bloodstock manager to Qatar Racing, said: “We’ve loved Roaring Lion since we first set eyes on him back in September 2016.

“I’m a big fan of his sire Kitten’s Joy and Roaring Lion was easily the best looking and best moving colt we’d seen by him.

"We couldn’t believe we got him for the price we did as he just looked like exactly the type of horse we set our sights on. To see how it has all panned out has been an amazing journey.

“He should prove a very exciting prospect at stud. We can’t wait to get him settled in at Tweenhills and begin the process of finding him suitable pairings.”

Fees for the enlarged Tweenhills stallion roster will be announced in the coming weeks.

Sheikh Fahad hoping he has unearthed his next Kitten's Joy 'steal'