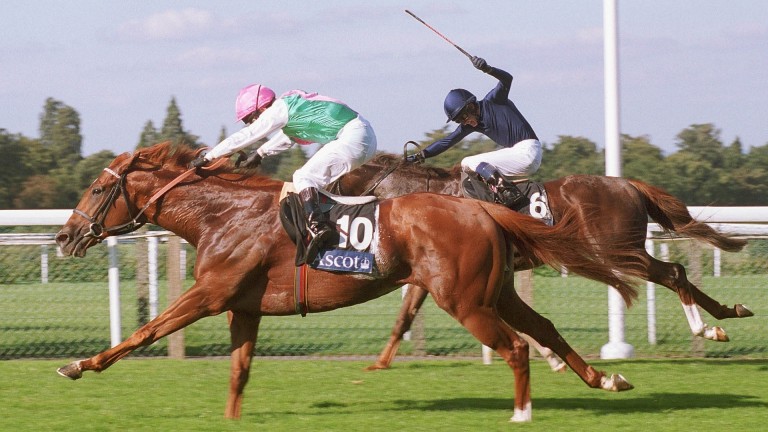 Observatory, the champion European miler who famously beat Giant’s Causeway in a brilliant battle for the Queen Elizabeth II Stakes at Ascot in 2000, has died at the age of 22.

A Juddmonte homebred trained by John Gosden, the son of Distant View also won the Lennox Stakes at Goodwood and the Jersey Stakes at Royal Ascot at three, as well as the Group 1 Prix d’Ispahan at Longchamp at four.

As a stallion, Observatory sired one of Juddmonte's most popular and resilient runners, the quadruple Group 1 winner Twice Over, who went on to find further fame as a stallion in South Africa.Observatory will also be remembered as the broodmare sire of Fair Eva, Frankel's first Group winner, who was a daughter of the Group 1-winning sprinter African Rose.

Juddmonte is sad to announce the death of Observatory at the age of 22. The former Champion 3YO Miler and sire of Gr.1 winners Twice Over and African Rose had lived at Banstead Manor Stud for the past 18 years and will be much missed by all the team - https://t.co/OZr4q5zttu pic.twitter.com/xpPIXSHACF

Having been retired from duties a few seasons ago, Observatory had lived at Banstead Manor Stud for the past 18 years.

Juddmonte’s UK stud director Simon Mockridge said: "Observatory possessed the most wonderful nature and character - he was an absolute delight to have around the stallion yard and even in retirement he played an integral role within the team.

"Our most enduring memory will be his stunning defeat of the ‘Iron Horse’ Giant’s Causeway in the QEII at Ascot, a memorable ride by Kevin Darley bringing him wide in the home straight for victory. He will be sorely missed by all at Juddmonte."

Brexit tops the agenda at EFTBA autumn meeting in Newmarket

FIRST PUBLISHED 2:22PM, DEC 12 2019
He was an absolute delight to have around the stallion yard and even in retirement he played an integral role within the team