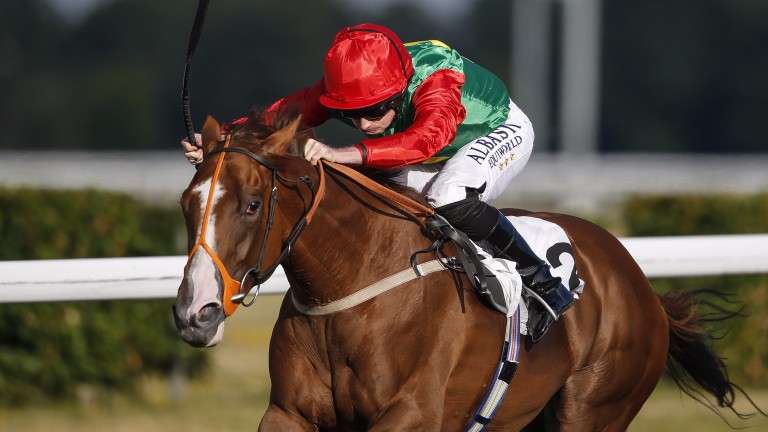 Billesdon Brook: daughter of Champs Elysees is the second foal out of Coplow
Alan Crowhurst
1 of 1
By Martin Stevens UPDATED 4:22PM, AUG 26 2017

Each December the Racing Post bloodstock desk chooses its broodmare of the year and an early frontrunner for the honour has emerged in the shape of Coplow, a daughter of Manduro owned by Stowell Hill Partners.

Other mares might have had higher profile success, such as Meow, the dam of dual 2,000 Guineas hero Churchill and exciting juvenile filly Clemmie, or Hveger, who produced the high-class middle-distance horses Highland Reel and Idaho.

But what makes Coplow's achievement all the more admirable is that while Churchill, Clemmie, Highland Reel and Idaho are all by the exceptional Galileo, her two stakes winners have come from far less star-studded stallions.

Billesdon Brook, who has now won three races and finished third in the Listed Star Stakes in a busy juvenile campaign, is by Champs Elysees, a fair sire best known for supplying Gold Cup winner Trip To Paris but now on dual-purpose duty for Coolmore.

Billesdon Bess, the winner of four races and on course to contest Group heats now, is the only stakes winner from three crops by former National Stud resident Dick Turpin.

The half-sisters are trained by Richard Hannon for a partnership including Jeanette McCreery, the widow of Bob, the late master of Stowell Hill Stud. Billesdon Bess was a vendor buyback at just 3,000gns at the Tattersalls February Sale in 2016.

They are the first two foals out of Coplow, who failed to win from eight starts but showed some good pieces of form, including when third to the high-class pair Hazel Lavery and Dank in a Newbury conditions race at two and when second to future 1,000 Guineas and Coronation Stakes runner-up Starscope in a Newmarket maiden that season.

Next off the Coplow production line is by a much more commercial sire – a filly by Showcasing bound for Book 2 of the Tattersalls October Yearling Sale in the coming weeks. She is sure to prove popular.

The mare also has a filly foal by Sepoy – making it four daughters out of four foals to date – and she has been covered by Territories.

Coplow's conspicuous exploits as a broodmare without the help of premier-league sires marks her down as one of the most exciting young producers in Europe.

FIRST PUBLISHED 4:21PM, AUG 26 2017
Next off the Coplow production line is by a much more commercial sire – a filly by Showcasing bound for Book 2