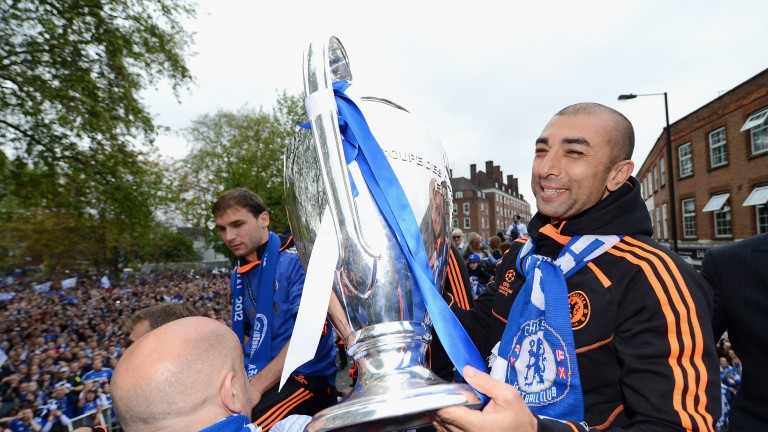 Ralf Rangnick is reportedly on the verge of joining Manchester United as manager until the end of the season and their supporters should be encouraged by some previous examples of big clubs turning to an interim boss in search of a quick fix.

Ole Gunnar Solskjaer, sacked by United following a 4-1 loss at Watford, won 14 of his first 19 matches in charge after replacing Jose Mourinho, initially on a short-term deal in December 2018.

Temporary appointments such as Solskjaer's are unusual but not unprecedented and here are six other instances of clubs who opted for a stop-gap solution:

Roman Abramovich is not renowned for his patience with underperforming managers and the Chelsea owner loves an interim appointment.

Guus Hiddink has had two short-term spells at Stamford Bridge, succeeding Luiz Felipe Scolari in 2009 and leading the Blues to third place in the Premier League, an FA Cup triumph and a controversial Champions League semi-final defeat to Barcelona.

The Dutchman's return in 2015-16, after Jose Mourinho's departure, was less memorable as Chelsea ended up tenth, one point behind Stoke – comfortably their lowest league finish in the past 25 years.

Getting the fans onside is the first battle for any interim manager but that wasn't an issue for Liverpool legend Kenny Dalglish, who stepped up after Roy Hodgson's underwhelming stint at Anfield.

The second Dalglish era started with defeats to Manchester United in the FA Cup and Blackpool in the Premier League, as well as a dramatic transfer window that saw Fernando Torres leave for Chelsea and Andy Carroll and Luis Suarez arrive.

The Reds finished sixth in 2010-11, earning Dalglish a permanent deal, but they came eighth in 2011-12 and the Scot left at the end of the season despite winning the League Cup and reaching the FA Cup final.

One online profile of Roberto Di Matteo is entitled 'From caretaker to history-maker' and the former Chelsea midfielder certainly had an impact during his brief spell in charge of the Blues.

Di Matteo succeeded where so many big-name managers had failed by winning Chelsea's first Champions League title – against Bayern Munich on their own patch, no less – as well as the FA Cup.

Cynics suggested that their success owed more to the vastly experienced core of Cech, Terry, Essien, Lampard and Drogba than to the Italian's leadership and he was sacked less than six months later.

As a former Chelsea player, Di Matteo was a popular figure at Stamford Bridge but his successor Rafael Benitez received a hostile reception due to the rivalry between the Blues and his Liverpool team.

Having failed to lure Pep Guardiola out of his sabbatical year after leaving Barcelona, Abramovich brought in Benitez, who never won over the club's fans despite lifting the Europa League trophy and claiming a third-placed finish in the league.

Jupp Heynckes, Bayern Munich manager from 1987 to 1991, had three subsequent spells in charge, most notably when replacing Carlo Ancelotti early in the 2017-18 campaign.

Bayern won 22 of their 26 Bundesliga games under the veteran coach, winning the league by 19 points, and lost 4-3 on aggregate to Real Madrid in the Champions League semi-finals. The club wanted Heynckes to stay on but, at the age of 73, he opted for a well-earned retirement.

Former Lazio, Inter and Fiorentina coach Stefano Pioli was originally brought in on a contract until the end of the 2019-20 season but he is still at the helm, leading the Rossoneri to a 1-0 win away to Atletico Madrid on Wednesday.

Milan's points-per-game average in 2019-20 rose from 1.29 to 1.84 after Pioli's arrival. Last term he helped them secure Champions League qualification for the first time in seven years and his side have won ten of their first 13 Serie A games this season.

FIRST PUBLISHED 3:18PM, NOV 25 2021
Getting the fans onside is the first battle for any interim manager but that wasn't an issue for Liverpool legend Kenny Dalglish