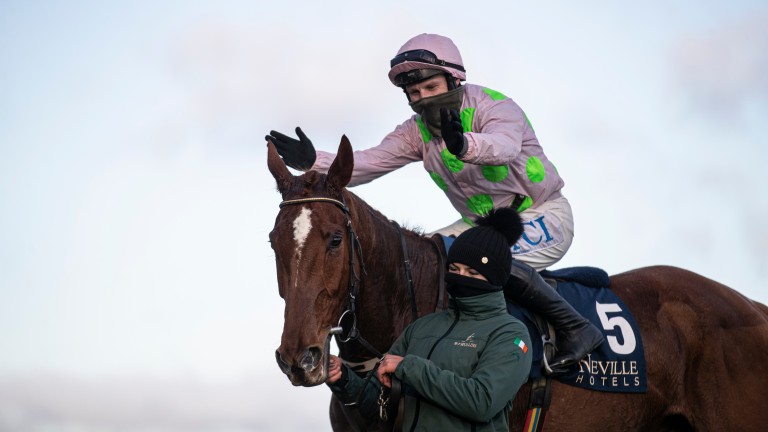 Monkfish: will not be in action this season
Patrick McCann (racingpost.com/photos)
1 of 1
By Sam Hendry UPDATED 9:07AM, SEP 22 2021

Willie Mullins has announced that Monkfish, who had been vying for favouritism for next year's Cheltenham Gold Cup, will miss the 2021-22 season after suffering a tendon injury, while stablemate Min has been retired.

Monkfish, owned by Rich and Susannah Ricci, established himself as one of the most exciting horses in training with a run of seven straight victories, including a Cheltenham Festival double in the Albert Bartlett Novices' Hurdle and last season's Brown Advisory Novices' Chase.

Min, who also ran in the Riccis' distinctive pink and green silks, retires as a seven-time Grade 1 winner, including three John Durkan Chases and the 2020 Ryanair Chase at Cheltenham. 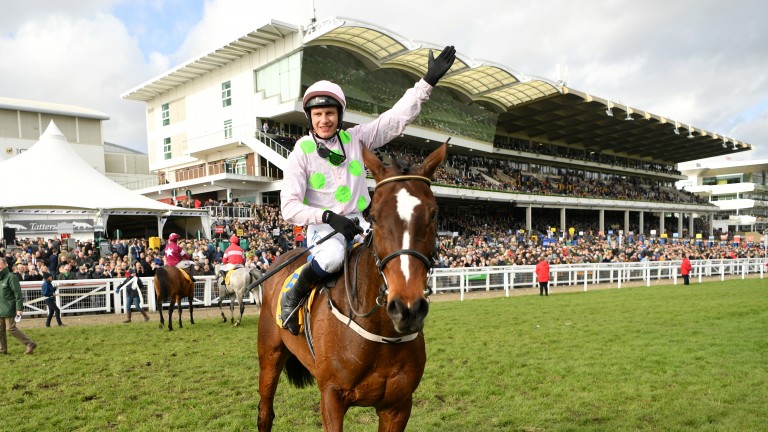 Having swept all before him in 2020 and 2021, Monkfish suffered his first defeat over fences when beaten eight lengths by Colreevy in Punchestown's Champion Novice Chase on his last start in April.

Nevertheless, he had remained as a general 6-1 joint-favourite with Minella Indo for next year's Gold Cup, a race Mullins won for the first time with Al Boum Photo in 2019, but will now miss the entire season in a massive blow for the Closutton team.

Min, who had already been ruled out until Christmas after undergoing surgery in August, bows out having earned £966,873 in prize-money during a stunning career in which he won 12 of his 24 races and finished second a further six times.

He had the unfortunate task of competing with Altior, who was retired last week, and was runner-up to the Nicky Henderson-trained superstar in the Supreme Novices' Hurdle in 2016 and the Queen Mother Champion Chase two years later.

Min proved himself adept over two and two and a half miles and earned further top-level wins in the Dublin Chase at Leopardstown and Aintree's Melling Chase.

However, after winning his third John Durkan at Punchestown in December, the ten-year-old was pulled up on his next two starts in the Dublin Chase and Ryanair Chase.

'What can you say after that?' – magnificent Monkfish strolls to Flogas success

Min the magnificent as he freewheels to victory in Melling Chase

FIRST PUBLISHED 7:54PM, SEP 21 2021
Having swept all before him in 2020 and 2021, Monkfish suffered his first defeat over fences when beaten by Colreevy at Punchestown

No Cheltenham for Skyace as Shark Hanlon rules Grade 1 winner out for the season 'Hopefully I can get a clear run in the spring'- Josh Moore closing in on return 'I was happy to get to the end of the dance without standing on Pasquale's foot' 'It was a shame' - jockey misses out on winner after positive Covid-19 test 'His work was very, very good' - Shishkin set for Energumene clash at Ascot 'I should have checked' - trainer fined after buying wrong horse in sales mix-up
Bookmaker
Price
E.W. Terms
bet365
Open Account
Ladbrokes
Open Account
William Hill
Open Account
Coral
Open Account
Paddy Power
Open Account
Betfair
Open Account
Sky Bet
Open Account
Sporting
BetVictor
Boylesport
888sport