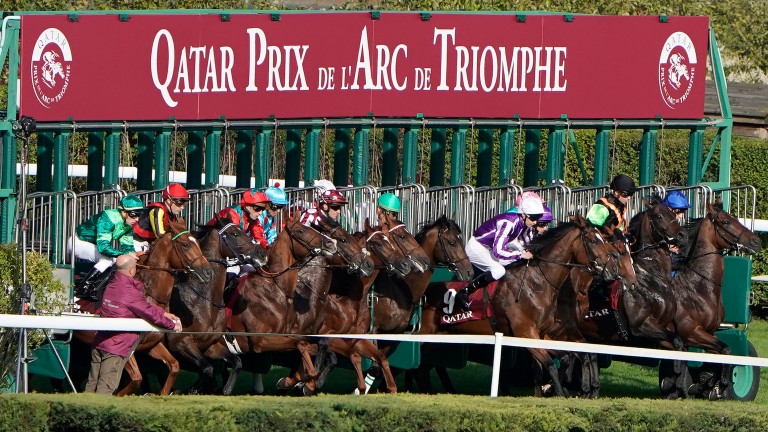 Racing will resume at Longchamp on May 11 after a seven-week hiatus
Alan Crowhurst/Getty Images
1 of 1
By Scott Burton & Lee Mottershead UPDATED 7:55PM, MAY 9 2020

French racing will resume on Monday despite last-ditch lobbying from discontented figures from the world of football to get the government to reconsider allowing the action to go ahead.

Football — like all team sports in France — is banned until September under France’s plans to ease the coronavirus lockdown, but racing will restart with three fixtures taking place at Longchamp, Compiegne and Toulouse after plans submitted and agreed on this week by officials were cleared by president Emmanuel Macron.

The clearance followed intense negotiations on Friday and, speaking on Saturday, France Galop president Edouard de Rothschild said: "We were absolutely crystal clear about the restrictions we will be putting in place, so on the technical level we had a very good case.

"However, an issue then arose about French football not restarting at the same time racing was set to resume, albeit behind closed doors. There was some lobbying and, yes, people compared football and racing, saying: 'Why are they allowed to restart when we in football are not?'

"That created an issue at the highest political level but the president and prime minister ultimately made the positive and favourable decision on Friday evening."

On Friday night, de Rothschild had personally thanked Macron, prime minister Edouard Philippe and the minister of agriculture, as well as two key intermediaries, former presidential candidate Francois Bayrou and the mayor of Deauville, Philippe Augier, in a late-night message on Twitter.

He said: "This was a race I wanted to win more than any other. The return to racing has been accepted. Now let us show them that they were right!"

Rumours of a late challenge to the French government's decision to allow a Monday resumption from an unnamed quarter had begun to circulate during Friday, leading France Galop and its trotting counterparts to issue a joint statement that evening, acknowledging that they had been involved in discussions with the state to ensure that Monday's meetings at Longchamp, Compiegne and Toulouse can all proceed at their intended venues.

In late April racing and trotting authorities reached agreement with their government masters at the departments of agriculture and the budget to resume operations behind closed doors on the basis of observing strict sanitary regulations.

While France Galop developed a series of backup plans in case of a need to do without their main tracks in Paris – the most serious centre of the coronavirus outbreak – the news this week that the police authorities had given the go ahead for racing in the capital appeared to remove one of the last remaining obstacles.

But at a meeting on Thursday evening of Macron's Defence Council – a French version of the Whitehall Cobra committee – the subject of reopening racecourses in the first wave of "deconfinement" was raised and the president is reported to have vetoed the plan, with his interior minister Christophe Castaner prepared to instruct the prefects of every French department to prevent the reopening of racecourses.

But after a tense and frantic day of behind-the-scenes negotiation, the action was allowed to proceed meaning France becomes the second major European racing nation after Germany to restart its racing programme after the Covid-19 shutdown.

FIRST PUBLISHED 8:24AM, MAY 9 2020
This was a race I wanted to win more than any other. The return to racing has been accepted. Now let us show them that they were right!