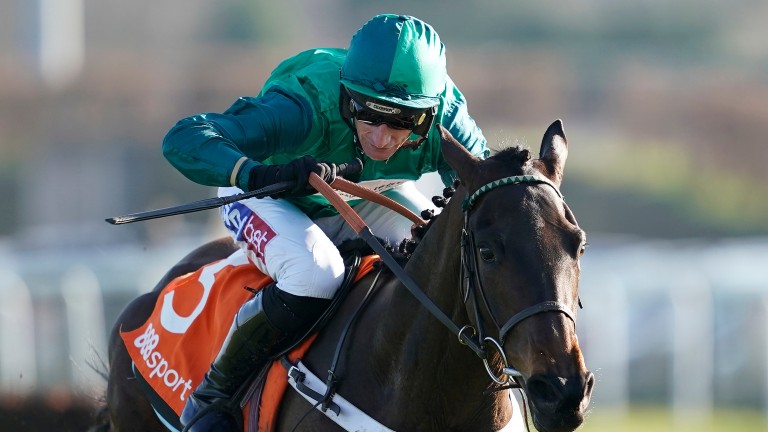 Fusil Raffles: has been ruled out of the Cheltenham Festival
Alan Crowhurst
1 of 1
By Matt Butler UPDATED 4:53PM, FEB 25 2019

Henderson had warned the Simon Munir and Isaac Souede-owned horse faced a crucial veterinary examination on Monday to determine the extent of a cut to his hind leg.

The cut was sustained during his easy nine-length success on his British debut at Kempton on Saturday, a performance which led to him being made 9-2 second favourite for the Triumph behind the Joseph O'Brien-trained favourite Sir Erec.

However, Henderson revealed on Monday that Fusil Raffles is set to miss out.

Henderson said: "Sadly we've had to make a decision where Fusil Raffles is concerned and I’m afraid it's bad news and highly unlikely he'll make Cheltenham and therefore not get the opportunity to take his chance in the JCB Triumph Hurdle.

"Our team of vets have assessed the situation and we all agree he'll need at least ten days' box rest, which gives us no time to get him right in two weeks. The important thing is he's not lame, but he hit his off-hind shin bone and a flap of skin has to be stitched back and it’s vital that the stitches hold it together otherwise we could even be forced to miss Aintree."

He added in his Unibet blog: "It’s terribly frustrating and unfortunate as I thought he was extremely impressive on Saturday. He’s on painkillers and anti-inflammatories to keep him comfortable and I hope to have him back in time to run in the same race We Have A Dream won at Aintree last year.

"Ironically, the acts of God have done it to us two years running as We Have A Dream was also forced to miss the festival. Simon and Isaac still have Adjali for the Triumph, who's in excellent form.

Anthony Bromley, racing manager to Munir and Souede, also referenced We Have A Dream missing the Triumph 12 months ago as he said: “We didn’t plan it for either horse but fate dictates what you have to do; you’re dealt your cards and have to play them accordingly.

“It would have been a rush anyway as Cheltenham is less than three weeks from the Adonis, so it’s probably a bit of a blessing he gets that bit longer and goes to Aintree instead.”

Verdana Blue, meanwhile, one of Henderson's contenders for Unibet Champion Hurdle glory, will limber up for Cheltenham with a run on the all-weather at Kempton on Wednesday.