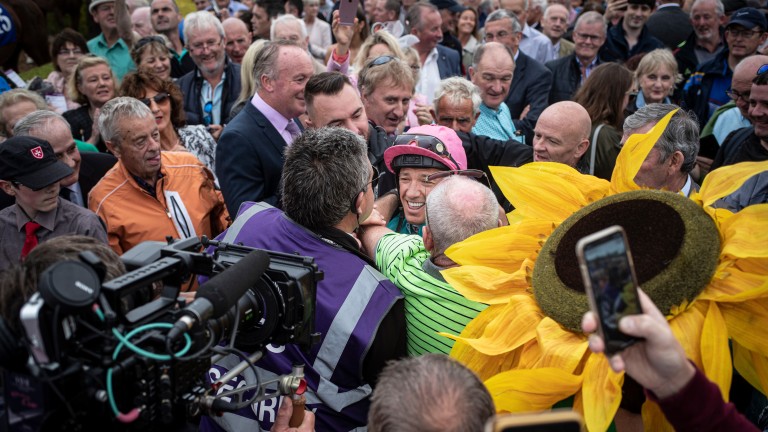 Frankie Dettori is mobbed by fans as he heads out for his first ride at Killarney
Patrick McCann
1 of 1
By Brian Sheerin UPDATED 9:29PM, JUL 17 2019

What do Enable, Stradivarius, Golden Horn, Authorized and ten-year-old jaunting horse Lucy have in common?

The latter, a strawberry roan Percheron, isn't bred for speed and won't be winning any Group 1s, but became famous on Thursday for bringing Frankie Dettori to Killarney.

In truth, it's the track's manager Philip O'Brien who deserves the plaudits rather than Lucy for having the foresight to approach the legendary rider six weeks back about the idea, something which, according to Lucy's owner and regular driver Kevin Tangney, has been the talk of the town in recent days. 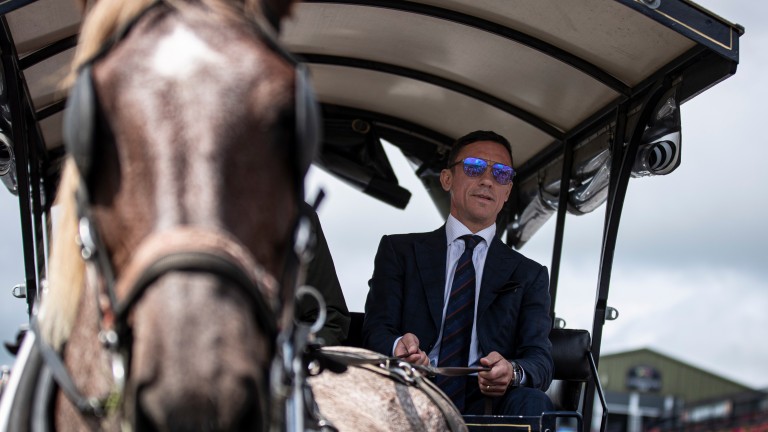 "Trapping horses are synonymous with Killarney and we thought it'd be fitting that Frankie arrived in a jaunting horse, the same way Lester Piggott arrived when he rode here back in 1991," Tangney said.

"He's following in Piggott's footsteps. Frankie coming to town has been big news all week. He's number one in the world so why wouldn't it be? He's a lovely man and was very nice to us."

Known as the tourist capital of Ireland, Killarney's bars and restaurants hum with the accents of many different nations – Irish folk singers, American tourists trying to trace their roots or German hillwalkers exploring the stunning landscape – and Frankie's appeal spreads far and wide.

It showed at the track with throngs of people turning up on the day for a glimpse of the great man.

And while you might scoff and say, 'ah sure what's the big deal, won't he be up at the Curragh at the weekend as well,' getting Dettori to Killarney was a genuine coup for the County Kerry track.

Tommy Stack, a former multiple champion jockey best known for his association with Red Rum before enjoying a huge amount of success as a trainer, would later watch Dettori ride Lady Wannabe to be beaten in a photo finish for his son Fozzy in the feature Cairn Rouge Stakes.

Stack said: "Frankie's a marvellous attraction, a wonderful jockey and he's just very good for racing. You can't get better than him and he's such a pleasant and nice fella. It's great to have him here."

As for the bookmakers, they've been avoiding Dettori multiples like the plague since he cleaned up at Royal Ascot, but the major firms were busy broadcasting various specials in their shops throughout the morning while the on-course layers were expecting an upsurge in business.

Speaking an hour before the first, Darragh Fitzpatrick said: "He's brought a big crowd and it's a fair incentive from Killarney to get him – some stroke really. It's what's needed.

"I intend laying three of them – I think the last one [Finding Nero] is his best chance, but I'll be carried out in a coffin if Time Tunnel wins. I'll stand that for my max and my max can by quite big sometimes." 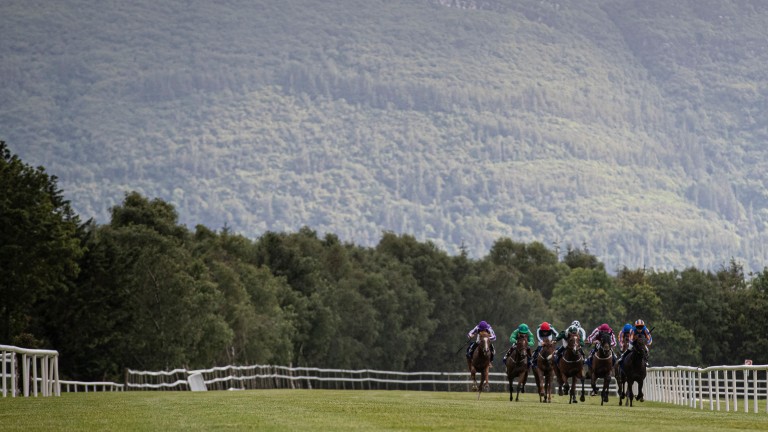 They're off! Baby Zeus won the first race at Killarney under Colin Keane
Patrick McCann

Fitzpatrick was still standing and smiling at the end of the evening as Dettori had to settle for two close seconds from his four rides with an anticlimatic last ride on Finding Nero, who was sent of 5-2 favourite but could never land a blow in finishing fourth.

Fitting to leave the last word to the man who organised the party.

O'Brien said: "It's great to see people have come out and got behind the idea. He got a great reception and him being here would have doubled our crowd."

FIRST PUBLISHED 7:30PM, JUL 17 2019
We thought it'd be fitting that Frankie arrived in a jaunting horse, the same way Lester Piggott arrived when he rode here back in 1991

'Frankie called up for the ride' - Dettori continues Chan link at Kempton German Derby next stop on Dettori world tour as rider aims to turn back clock 'I'd have Frankie Dettori on any horse, in any race, on any day of the week' 'He nailed it' - George Baker analyses a masterclass from Frankie Dettori Frankie fights back the tears after racegoers show support for racing's top star The drama continues at the Curragh where O'Brien puts his full faith in Tuesday