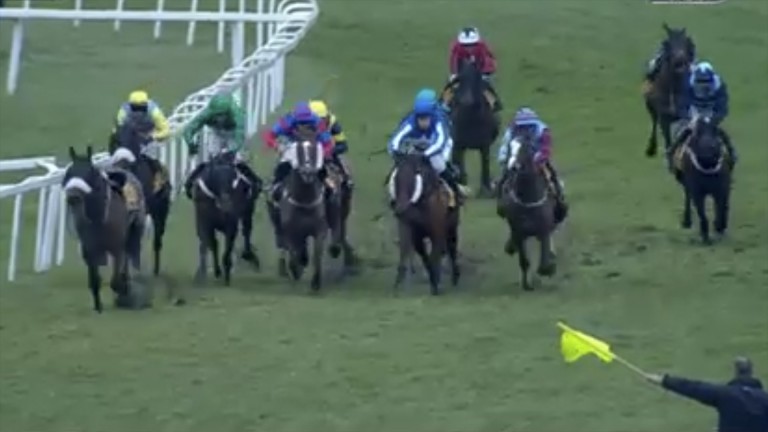 Yellow flag raised on the final circuit of the London National at Sandown earlier this month
1 of 1
By Tom Ward UPDATED 7:53PM, DEC 17 2019

The seven jockeys who received ten-day bans after the void London National at Sandown for continuing to ride to the finish had their appeals upheld and suspensions quashed on Tuesday following an independent disciplinary hearing into the race.

The jockeys contended they had not seen the yellow stop-race flag in the race on December 7 which was run in the final minutes of daylight, an argument that was accepted by the panel.

After a lengthy appeal hearing at BHA headquarters in London, panel chair Tim Charlton QC said: "No jockeys have lied about not seeing the stop-race flag in this case. The light was closing in at Sandown at that time of day and the flag used has not been waved vigorously enough. As such it was not unreasonable for the jockeys to have missed it."

The panel also conceded there would be no reason for the jockeys to continue riding had they seen the flag, as all had confirmed during questioning their explicit understanding that its waving would lead to a void race.

The decision means Jamie Moore, Daryl Jacob, Adam Wedge, Stan Sheppard, Harry Skelton, James Davies and Philip Donovan will all be spared ten-day suspensions and are free to ride over the busy and lucrative festive period, with the bans originally scheduled to start on December 21.

London National - story of the race

The catalyst for the void-race fiasco was the fatal heart attack of veteran Houblon Des Obeaux on the track's bend between the third and second-last fence.

As the rest of the field continued, course officials decided there would not be room to safely direct the remaining runners around the stricken horse and those by his side, with the head groundsman directed to wave a yellow stop-race flag in front of the third-last fence.

In theory, that instruction should have brought the race to a halt before the field reached the problem area.

Much of the contention in the hearing focused on the activity of Craig Williamson, head groundsman at Sandown, who stood in front of pond fence with the stop-race flag.

Rory Mac Niece, who represented the jockeys, suggested Williamson's failure to motion with the flag in favour of holding it statically was in contravention of BHA and internal procedures at Sandown, as well as the course's risk assessment on stop-race scenarios. Each calls for the flag to be waved.

During his testimony Sandown clerk of the course Andrew Cooper suggested the motion used by Williamson was a waving motion. Mac Niece called that "absolute nonsense".

In his closing remarks to the panel Mac Niece said: "Sandown was not the jockeys' fault. You cannot expect a race to stop with a single, yellow flag that has not been waved for fear it may furl up. There is no credible reason why experienced riders would ignore a yellow flag having seen it."

The BHA's case, led by integrity director Tim Naylor, suggested the jockeys had seen the flag and if they had not, they ought to have seen it.

In closing, Naylor said: "If you look at the geography and the video the BHA suggests it is implausible they did not see the flag."

All jockeys gave evidence to the panel and confirmed they had at no time seen a stop-race flag being waved.

A whistle was heard by all but most attributed it to the presence of the black screens masking the stricken Houblon Des Obeaux just beyond the pond fence – the third-last on Sandown's chase course.

Skelton told the panel: "There was ten minutes of daylight left and it was getting dark. I did hear the whistle as we turned into the home straight; that caught my attention and as I looked up I could see black screens behind the pond fence.

"If I had seen the flag I would have 100 per cent stopped and pulled up. I would never put anyone, myself or my horse in danger."

During his testimony, Jacob emphasised the difficulty of riding in the conditions faced that late afternoon at Sandown.

"I can't stress enough how quickly we have to make decisions, whether they turn out to be right or wrong."

The hearing began with robust questioning for representatives from Sandown. Mac Niece quizzed Cooper and Williamson on the stop-race processes in use and why they were limited to just three flags on the day in question.

Cooper said: "We thought we had had something in place that would work. We felt that with three flags we were in a position to stop the race."

FIRST PUBLISHED 6:13PM, DEC 17 2019
There is no credible reason why experienced riders would ignore a yellow flag having seen it