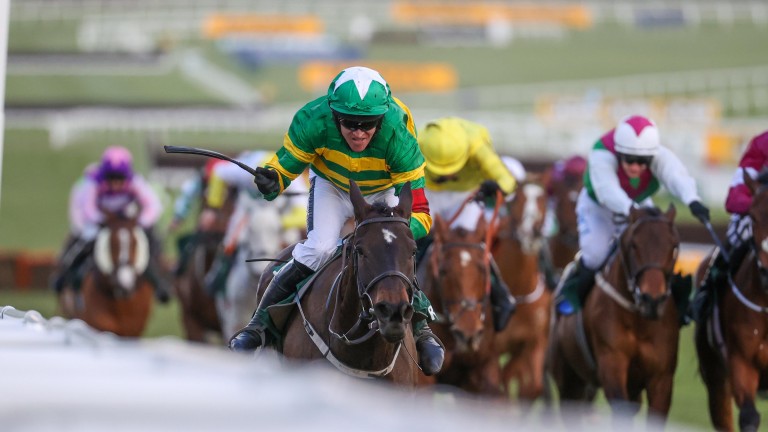 Last year's impressive County Hurdle winner Saint Roi has been ruled out of the Unibet Champion Hurdle but a dark horse from the Willie Mullins stable has emerged for the race in the shape of French recruit James Du Berlais.

Saint Roi was second favourite for the Champion Hurdle last autumn having started the current campaign in promising fashion by winning a Grade 3 at Tipperary in October, but he has been beaten three times at Grade 1 level since.

The most recent of those defeats was when he finished fourth to Honeysuckle in the Irish Champion Hurdle and he was pushed out to 25-1 by some firms for the festival's opening day showpiece afterwards.

Mullins said: "Saint Roi is out of Cheltenham. I had a chat with JP [McManus, owner] the other day and we came to the conclusion that we're not happy with him going to Cheltenham, so he won't run.

"He just hasn't gone forward this season. He's had one or two little niggles and I think JP was happy just to let him get over those."

Mullins explained: "We've been watching James Du Berlais in France for the last 18 months and trying to buy him. They wouldn't sell and they were looking for a lot of money. Then, out of the blue, Simon [Munir] and Isaac [Souede] stepped in and did a deal with the trainer in France. The deal was for the horse to come over to Ireland after his four-year-old season was finished and that's what happened. They rang me and asked would I like to train him. That was a very pleasant surprise to get that call.

"He can be a tough ride from what I saw of him in France, but we'll know a lot more about him in the next two weeks because we will be asking him questions that we have not asked him before. It's a bit like French Aseel, we're going to get stuck into both of them very soon."

James Du Berlais is available at 50-1 with sponsors Unibet for the Champion Hurdle.

Eddie O'Leary: 'I was surprised to have read so much negativity about the run' (Members' Club)

FIRST PUBLISHED 7:00PM, FEB 22 2021
He just hasn't gone forward this season. He's had one or two little niggles and I think JP was happy just to let him get over those

Zed Run: the virtual arena where digital racehorses trade for $125,000 Irish occupy British territory as Blackmore and De Bromhead reign supreme Where can I go racing in England next week and how can I buy tickets? Your questions answered as racecourses prepare to welcome back crowds Tracks in England to welcome back spectators next week as lockdown eases Aidan O'Brien leaves just one in as Palace Pier heads 16 Lockinge confirmations