Rule 4 explanation on the cards for occasional racegoers 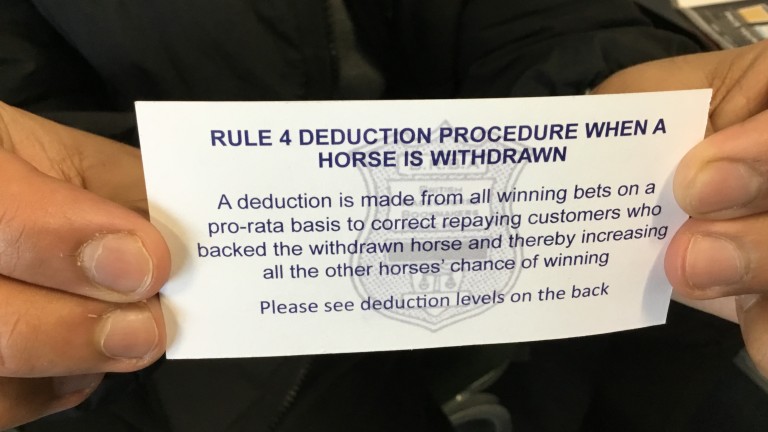 Bookmakers handed out cards at Doncaster on Saturday explaining Rule 4 deductions
David Carr
1 of 1
By David Carr UPDATED 8:26AM, JAN 28 2019

Disputes between bookmakers and punters querying a deduction from their winnings could become less frequent thanks to an initiative trialled at Doncaster on Saturday.

Occasional racegoers are often unaware of the system that operates when a horse is withdrawn and they receive a reduced payout under Rule 4.

So Christopher Hudson, a bookmaker from Leeds and director of the British Racecourse Bookmakers Association, issued layers with small printed cards which they could give to customers when a horse is withdrawn, explaining the rationale of Rule 4 and the level of deductions to be made. 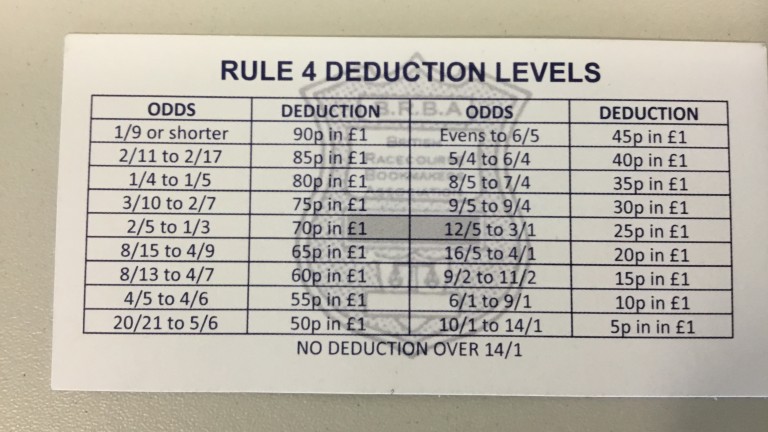 No horse was actually withdrawn at Doncaster, but the aim was to help improve communication and speed up pay out time.

Hudson explained: "With the acrimony that there has been about gambling at the moment we want to do everything we can to help people.

"It has been agreed with the RCA. The Gambling Commission were keen too, they like openness and it is another way of educating people.

"It saves time and a lot of bother if there is a dispute, perhaps on a busy Saturday in the summer when they have had a bit of booze and a customer asks why there is 10p in the pound off.

"The idea is that the days of the professional punter on the racecourse are going and we want to help the recreational racegoer."

Rule 4 is part of the Tattersalls Committee rules of betting on horseracing and compensates a bookmaker following the withdrawal of a horse in a race.

In a hypothetical example, if a bet is placed on a 5-1 shot in a three-runner race but a 7-4 shot in the same event is subsequently withdrawn, the 5-1 is no longer a fair reflection of that horse's chances.

Rule 4 deducts a set value in pence out of every pound in winning bets, with the size of the deduction determined by the price – either early or show – of the non-runner.

In the example above the deduction for a 7-4 non-runner would be 35p in the pound from winning bets.

FIRST PUBLISHED 7:00AM, JAN 28 2019
We are doing it with the blessing of the RCA. The Gambling Commission were keen too, they like openness and it is another way of educating people