Confirmed runners and riders for the Irish 2,000 Guineas - plus an early tip 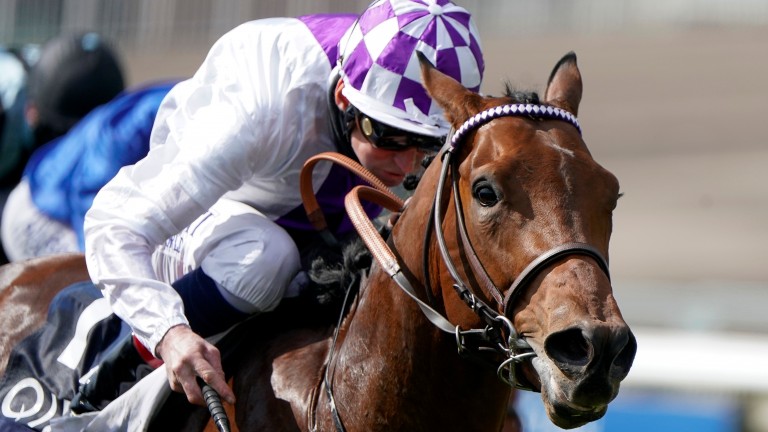 Poetic Flare: impressive at Newmarket and primed for a third Classic run in just 22 days
Alan Crowhurst (Getty Images)
1 of 1
By Brian Sheerin UPDATED 10:00AM, MAY 21 2021

Poetic Flare, the 2,000 Guineas winner beaten in last Sunday's French equivalent, has been confirmed for a quick turnaround in Saturday's Tattersalls Irish 2,000 Guineas at the Curragh, whose card must pass a 7.30am inspection on the day of racing.

Trainer Jim Bolger is no stranger to bold plays and will pitch his homebred colt into his third Classic in just 22 days along with stablemate Mac Swiney, who won the Vertem Futurity Trophy last year.

Bolger's stable jockey Kevin Manning sticks with his Newmarket hero, who was sixth in the Poule d'Essai des Poulains at the weekend, while Rory Cleary is on Mac Swiney.

Irish 2,000 Guineas day in doubt as Curragh calls inspection after 34mm of rain

Bolger said: "The intention is for Mac Swiney and Poetic Flare to run in the Irish 2,000 Guineas on Saturday.

"Mac Swiney had nasal discharge for a week after theDerrinstown, but he has made a quick recovery and we are happy to let him run.

"We have drawn a line through Poetic Flare's French Guineas run. Things didn't work out as we hoped it would– it was a combination of ground and traffic for him– but he still wasn't beaten very far.

"Both horses are well and the ground is what it is for them. We can do nothing about the weather."

Aidan O'Brien, seeking a 12th triumph in the race, relies on Battleground, Van Gogh and Wembley, but his son and fellow trainer Joseph did not declare the classy Thunder Moon due to deteriorating ground.

Joseph O'Brien explained: "The ground is verytesting and it looks like it's going to be proper soft ground. We thinkhe prefers a better surface so we've decided not to run him. The St James's Palace Stakes at Royal Ascot would look the logical target for him now."

Jessica Harrington runs ante-post favouriteLucky Vega, while added interest comes from Britain in the form of Newmarket raiders La Barrosa and The Rosstafarian for Charlie Appleby and Hugo Palmer.

William Buick, chasing a first jockeys' crown in Britain, will head over to ride La Barrosa.

'It's a once-in-a-lifetime opportunity'

County Tipperary trainer Joe Murphy will be hoping to spring a surprise with Agrimony, priced up at odds of 50-1 with most firms, but a horse who should be adepton the expected soft ground.

Ardbrae Lady finished second in the Irish 1,000 Guineas in 2006 for Murphy, whosaid: "Agrimony will be a big price, but we are very happy to have him. The big guns of Ballydoylealways have to be respected, but I don't think our fella will mind the ground.

"It's a once-in-a-lifetime opportunity for us and we're looking forward to taking our chance. We think he's a good horse and Saturday will prove if he is or not."

Jessica Harrington was provided with her first Classic success when the brilliant Alpha Centauri began her Group 1-winning run in the 2018 Irish 1,000 Guineas, and the leading dual-purpose trainer can complete the set with Lucky Vega.

The son of Lope De Vega, who is destined to stand at stud for the upcoming southern hemisphere breeding season, landed last season's Group 1 Phoenix Stakes, and failed by just half a length when third to Poetic Flare in the 2,000 Guineas at Newmarket.

Out of an unraced Cape Cross half-sister to the German Listed-winning Oasis Dream mare Important Time, he has plenty of pace but the Curragh mile should suit him ideally.
Kitty Trice, Racing Post bloodstock reporter

Niece of Guineas winner Poetic Flare among the Goresbridge offering

A first Classic for Lyons and Keane as Siskin oozes class in Irish 2,000 Guineas

Ken Condon: she'd be worthy of Irish 1,000 Guineas run if the weather is kind

FIRST PUBLISHED 10:48AM, MAY 20 2021
The big guns of Ballydoyle always have to be respected, but I don't think our fella will mind the ground