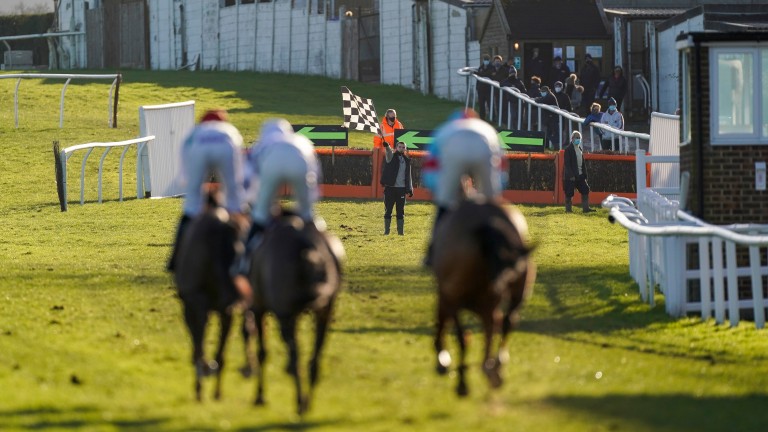 Plumpton officials came through a testing and potentially controversial six-race card on Monday after repeated inspections delayed the green light until 20 minutes before racing then low sun completely changed the nature of some races.

The Sussex track's fixture was finally given the go-ahead after three inspections during a morning and early afternoon of increasing drama and uncertainty caused by frost.

The opening maiden hurdle, hit by seven non-runners, was pushed back five minutes to 1.55pm as officials gave the meeting every chance to beat the frost – including what was a heavily delayed third inspection.

"It was more luck than judgement," conceded clerk course Mark Cornford, who then had to make major changes to later races to deal with the impact of a low sun.

He added: "The weather came right in the last hour, which has saved us and I'm just grateful for everyone's support. There's been no foolhardiness, we've not been gung-ho, it's been carefully considered. The weather's helped us and we've had the courage to hold on."

Inspections at 8am and 10am proved inconclusive, with frost in places taking longer to thaw than anticipated. To add to the drama traffic problems on the M25 delayed chief steward Chris Rutter's arrival for the decisive inspection.

A delegation of stewards, course officials, trainers and jockeys were out on the track just before 1pm to assess whether the meeting could go ahead and after lengthy deliberation with the racing world watching on they decided the course was safe.

Rutter said: "Some of the jockeys walked the course earlier and had concerns but when they've walked it with me, which was an hour before the first race was due to start, the frost had come out of the ground quite significantly. It was touch and go but safe to race.

"If I had any doubts I would have pulled the plug, but the jockeys were happy to race."

One rider, Adam Wedge, expressed satisfaction with the ground, saying after the first race: "It's very dead but it's fine and will only get better as the afternoon goes on." 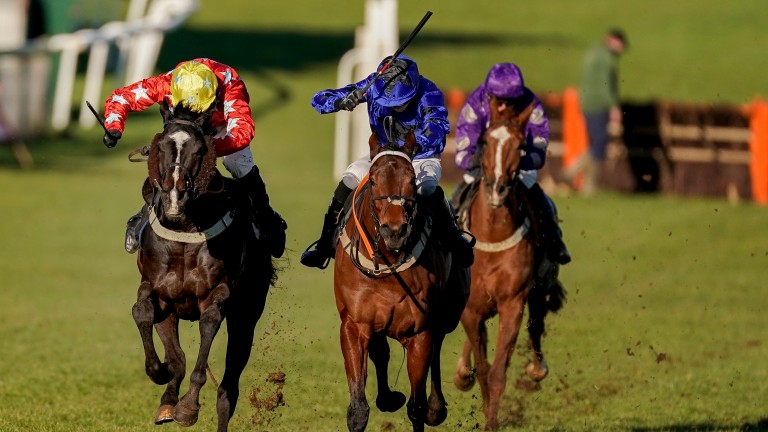 Runners in the opening maiden hurdle at Plumpton, which was won by Harry Reed aboard Khan (left)
Alan Crowhurst (Getty Images)

There were 11 non-runners, ten because of the ground, in the first two races, including the favourite for the opener Natural History, who was withdrawn five minutes before the race. Just five went to post, with Glass Of Bubbles suffering a fatal fall at the flight at the top of the hill just past the stands, an incident that left jockey Tom Buckley concussed.

The last hurdle in the back straight was omitted throughout the meeting and the three hurdles in the home straight were taken out for the second race because of the low sun. Three of the seven went to post, with just one of the five hurdles jumped on each circuit.

Addressing the large number of non-runners in the first two races, Cornford said: "I'm visible and available and no-one made any comment to me about the ground, good, bad or indifferent."

Cornford conceded if spectators had been on course perhaps they would not have shown as much patience in delaying the decision to race until so close to the start.

He said: "It never crossed my mind while we were dithering but I suppose, on reflection, it could have been an added complication to the decision.

"I have to be totally fair to my executive, they put no pressure on me and they never do. We try and get every meeting on, as we've done today, and we've got lucky."

How it unfolded: a day of drama at Plumpton

8am First inspection is inconclusive and another is set for 10am. Temperature was -2C at 6am but had fallen to-3C by 8am

10am Second inspection is inconclusive and a decision is made to look again at midday. The forecast is favourable but the temperature is rising only slowly

12.50pm Stewards, course officials, trainers and jockeys examine track. There is particular concern about frost in the back straight

1.55pm Only five go to post for the opening maiden hurdle, with seven non-runners, six because of the ground, including Entre Deux and favourite Natural History, who are withdrawn five minutes before the start. The last hurdle in the back straight is omitted throughout the meeting because of the ground

2.20pm Only three go post for the 2m4f novice hurdle after four are withdrawn. All three hurdles in the home straight are omitted following concerns expressed by riders as the start of low sun obscuring their vision, meaning just two hurdles are jumped in all

2.50pm The third race, a handicap chase, starts on time with just one non-runner due to the ground. All 18 fences are jumped. There are five more non-runners because of the ground in the final three races

What's on this week: midweek fun in Galmoy Hurdle before seven Grade 2s on action-packed Saturday

FIRST PUBLISHED 8:02AM, JAN 25 2021
The weather came right in the last hour, which has saved us and I'm just grateful for everyone's support

IHRB promises quick investigation of disputed Gordon Elliott image 'I can't wait to take over' - all change after 45 years of survival and success 'I can't believe it's just happened' - jockey in shock after 300-1 Guineas win Alain Cawley handed 14-day ban and Johnny Farrelly fined £3,000 over non-trier Full fixture list published as Levy Board shores up prize-money for May and June Four big-priced Cheltenham outsiders including one who 'need not fear the hill'