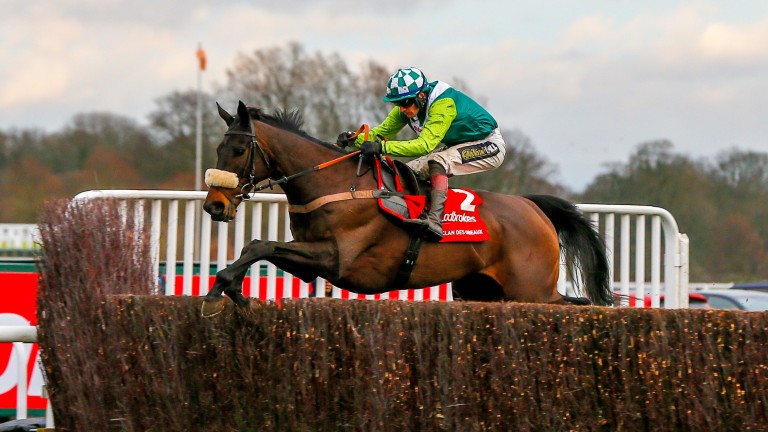 The combination of a first start of the season and a left-handed track for Clan Des Obeaux in Saturday's Betfair Chase at Haydock is not denting Paul Nicholls' confidence in landing a record-extending seventh triumph in the race with a horse he believes is nearing the peak of his powers.

Owned by Nicholls' landlord Paul Barber, his yard sponsor and close friend Ged Mason, and Manchester United legend Sir Alex Ferguson, Clan Des Obeaux has plenty of talent, which his romps in the last two King George VI Chases have demonstrated, but those displays came after prep runs and on a right-handed track.

"It's been fantastic, especially those memories of Kauto and the last one was an amazing day," the 11-time champion trainer reflected on Monday. "We were incredibly lucky to do that and then along came Silviniaco Conti. It's been a very good race for us and one we really like."

Switching his focus to the weekend, Nicholls makes a compelling case for Clan Des Obeaux, a 3-1 chance with the sponsors, who rate last year's winner Lostintranslation the 5-4 market leader with Bristol De Mai, successful in 2017 and 2018, next at 7-4.

"Clan ran in it two years ago and probably wasn't fully wound up," Nicholls added. "I was seeing if he would be good enough to be a King George horse and he progressed from there to Kempton. 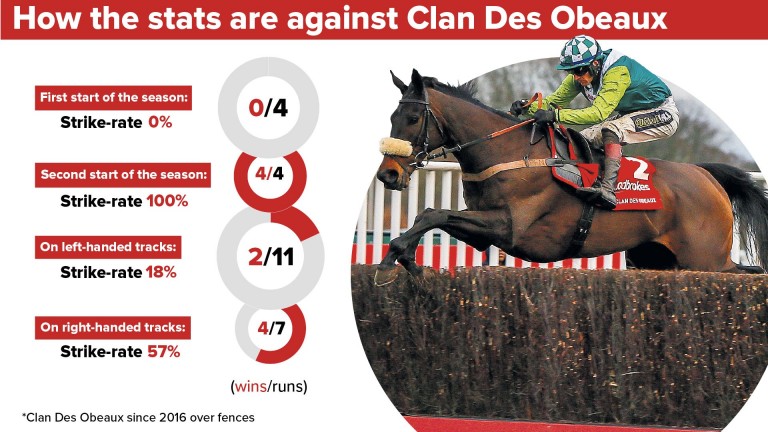 "He actually ran better than we thought at Haydock and then went and won the King George. This time he'll be ready to run his best.

"He probably hasn't had his best form going left-handed, although he's won at Haydock and Newbury, and he'll love the track because it's flatter than Cheltenham.

"He's only eight, so he's probably at his peak now and he just looks a different horse. I don't know why but he's more athletic and stronger and his work's been good. He schooled very nicely this morning and was very fresh, so I'm very happy with him."

Nicholls, who confirmed Sam Twiston-Davies – aboard for the schooling session – would take the ride, has been heartened by the form of his chasers, fuelling hope of a bold show.

"He's done lots of work and all of those good chasers of ours have run really well first time up," the trainer said.

"He's been in since July 1, has had an awayday with Politologue and looks great. He's very fit whereas two years ago we went there just thinking and hoping he might be good enough for Grade 1s and he ran well, but I'd say we've got him in very good shape this time.

"There's no point going into this thinking he'll need the run and improve to Kempton. He's got plenty of time from Saturday to Kempton and he's ready – no excuses fitness-wise as far as I can tell."

Nicholls resisted the temptation to give Clan Des Obeaux a back-up entry in Ascot's Chanelle Pharma 1965 Chase on Saturday and has a healthy respect for the Kapgarde gelding's main rivals, which will not include Cheltenham Gold Cup second Santini, who was taken out of the race on Monday by connections.

"Bristol De Mai has been a fantastic horse and has had some real battles," he said.

"He's not getting any younger, but always runs well at Haydock, although I suppose he's got to leave a few runs from last season behind him when he probably wasn't at his best.

"If he came back to his best, he's always a danger there, but Lostintranslation looks the one and Colin Tizzard's are running into some form now.

"I know he was disappointing in the King George, but he won this nicely last year and he'd probably be the one to beat [of the opposition] but, in my view, Clan is probably one of the ones to beat.

"He's a dual King George winner and we've set out to win this race and not just go there as a prep for Kempton – he's got a big chance."

Members can get the lowdown on the rest of Nicholls' string with his stable tour:

Part one: 'I've been lucky enough to win four Gold Cups - I'd love to make that five'

Part two: 'I have a feeling he's going to run a massive race in the Tingle Creek'

Part three: 'I like this horse - he leaps out as a potential Ryanair Chase winner'

'He probably thought he was Shishkin' - Yala Enki claims third Portman Cup win 'Venetia is brilliant' - Rich Ricci nails it as Royale Pagaille turns back time Next stop Supreme? Unbeaten Jonbon pushed out to 4-1 after Haydock win 'He should be bang there' - which trainer fancies his chances in Fleur De Lys? Shishkin eases in the market as punters gravitate to Energumene ITV Racing tips: one key runner from each of the eight races on ITV4 on Saturday