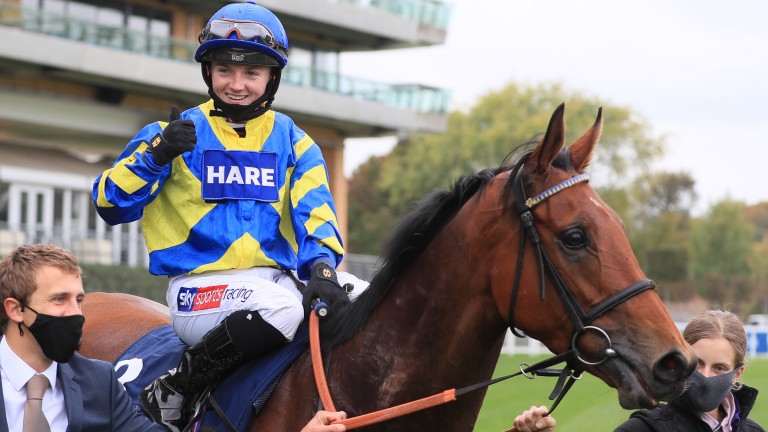 Hollie Doyle: back aboard Trueshan in the Gold Cup at Royal Ascot
Mark Cranham
1 of 1
By Stuart Riley UPDATED 9:33PM, JUN 13 2021

Hollie Doyle and Ascot are a match made in heaven. This time last year she rode her first winner at the royal meeting, and the talented 24-year-old believes the two horses on whom she dominated British Champions Day with at the same track represent the best chances of adding to her haul.

Doyle took the Berkshire course by storm last year, partnering Scarlet Dragon to victory in the Duke of Edinburgh Stakes for a first Royal Ascot winner and then breaking her Group 1 duck in the Champions Sprint aboard Glen Shiel four months later, who contests the Diamond Jubilee Stakes next Saturday.

It was a success that came little over half an hour after Doyle had landed the Group 2 Long Distance Cup on Trueshan as she took the first two races on Britain's richest raceday and catapulted herself into the big time with a third-place finish in the 2020 Sports Personality of the Year award to cap a remarkable year.

Doyle has shown little sign of slowing down this year, taking her first ride in a Classic at Epsom earlier this month aboard Sherbet Lemon in the Cazoo Oaks, and she is a 14-1 shot with Ladbrokes to land top jockey honours at the five-day spectacular.

Doyle pinpointed her successful Champions Day double as the two horses most likely to get her on the scoresheet this week. She said: "I can't see why they won't run very well. I'd like a bit of rain for them but looking at the forecast that's probably not going to happen. They're proven around there and we know they can step up to the plate at that level."

Trueshan is a general 8-1 for the Ascot Gold Cup and faces the unstoppable force that is Stradivarius, but Doyle added: "I don't see why he can't do it, off the back of what he achieved last year. The step up in trip shouldn't be a problem. I've ridden against Stradivarius a few times now so we know what to expect from him. Hopefully we can come up with a way to beat him."

On the remainder of her book, which is still to be finalised, she added: "I've got a few nice rides so I just need a bit of luck really. I can't wait. Hopefully I can get a winner."

FIRST PUBLISHED 4:00PM, JUN 12 2021
I can't see why they won't run very well. They're proven around there and we know they can step up to the plate at that level