Is Appleby fending off the red-hot Haggas? How the trainers' title race stands 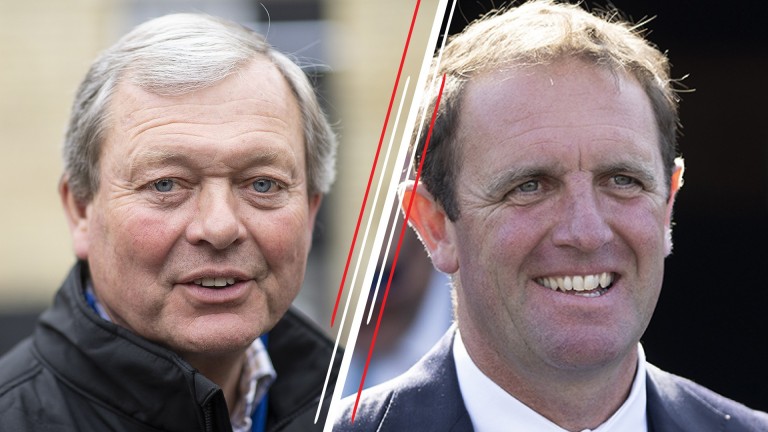 William Haggas (left) is the closest early challenger to Charlie Appleby in the trainers' title standings
1 of 1
7:48PM, MAY 24 2022

Charlie Appleby won his first Flat trainers' title last season, helped by wins in British and Irish Classics with Adayar and Hurricane Lane. Appleby has picked up from where he left off and leads the way in his bid for back-to-back titles. Can anyone stop the Godolphin trainer? Here we take a look at the top six trainers in the standings at this early stage to see how the championship is shaping up . . .

Fresh from his first trainers' title, Appleby has been in superb nick and swiftly moved to the top of the standings with a one-two in the 2,000 Guineas courtesy of Coroebus and Native Trail.

The latter also landed the Group 3 Craven at the same track prior to his Classic second and sealed a Guineas treble for Appleby when taking the Irish equivalent on Sunday.

Appleby has already struck six times in Listed events in England this season. The 21 winners he saddled in April was his highest in a single month since August 2013, demonstrating the rude health of form the Godolphin trainer is enjoying with the bulk of the season still to come.

Haggas's red-hot form has catapulted him up to second in the championship, less than £50,000 behind Appleby. A magnificent May has so far seen him win ten Group or Listed races, including Baaeed's emphatic Lockinge success. The brilliant miler looks certain to rake in more riches for Haggas as the season progresses.

His success has not been contained to Britain either, with victories for Maljoom in the German 2,000 Guineas and Alenquer in the Tattersalls Gold Cup at the Curragh continuing the good times.

Last year's runner-up to Appleby, Balding has never won a trainers' title, but has made a consistent start to the season with King's Lynn's Temple Stakes triumph the highlight so far.

Having hit double figures for winners in March, April and May, the Group 2 win by the Queen's horse at Haydock last Saturday was Balding's most valuable win of the season.

The Newmarket trainer also took a Listed prize at Leicester in April with Happy Power, but given that some of his biggest successes last season came at Royal Ascot, Glorious Goodwood and Doncaster's St Leger meeting, more prizes can realistically be expected as the summer progresses.

Charlie Johnston joined his father Mark on the licence for the start of this season and the Middleham operation has been as a busy as ever, saddling 342 runners so far this year.

Living Legend has been responsible for nearly a quarter of the duo's prize money with wins in valuable all-weather Listed contests before successfully stepping up in grade to take the Group 2 Betfair Exchange Jockey Club Stakes last time out.

The 14 per cent strike-rate is the same as Johnston snr's last season on the licence, with the pair well on the way to hit over £1m in prize-money for the 25th season in a row.

Karl Burke is operating at a career-best strike-rate of 17 per cent, helped largely by the superb form of his two-year-olds.

Of Burke's 29 juvenile runners on turf this season, seven have won and six have placed, with Pillow Talk one of one many promising youngsters who could be Royal Ascot-bound after her Listed win at York.

El Caballo's six-timer, completed in the Group 2 Sandy Lane Stakes at Haydock last Saturday, has been another highlight. Burke has never finished in the top ten of the trainers' championship, but that could be set to change if he maintains his early season form.

John and Thady Gosden have endured some bad luck this season with ante-post 1,000 Guineas favourite Inspiral forced to miss the race but the form of another filly, Emily Upjohn, has offered some chance of Classic compensation.

The Musidora winner is odds-on for the Cazoo Oaks and could provide another boost to the Gosden team after Stradivarius' winning reappearance in the Yorkshire Cup.

Although John Gosden has been champion trainer four times (all in the last decade), a fifth title would be a first since son Thady joined him on the licence in 2021. The likes of Mishriff, Reach For The Moon and Mostahdaf could substantially boost the prize-fund during the summer.

'Gosdens are the world's best, they'll get Emily Upjohn rider right' - owner 'They could have handled it better but this isn't the end for Frankie' - Fallon What next for Dettori: is the racing landscape still set up for him to succeed? It's all very sad but racing may in one way gain from the Dettori-Gosdens split 'He's full of determination' - write Dettori off at your peril says Luca Cumani Frankie fights back the tears after racegoers show support for racing's top star