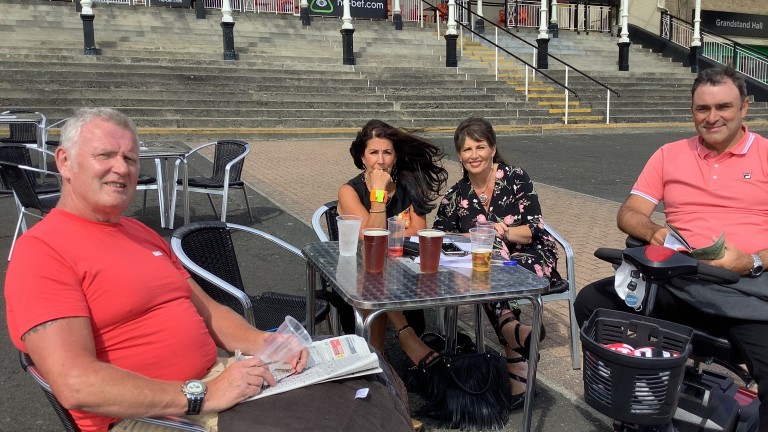 (Left to right) Iain and Susan Torley plus Joanna and John Gale were among the early arrivals on the night the William Hill Racing League got under way
David Carr
1 of 1
By David Carr UPDATED 6:52PM, JUL 29 2021

The crowd started to gather early as history was made on a sunny evening at Newcastle.

Some punters had taken up their places more than three hours before the first race as the William Hill Racing League finally got under way.

Six successive Thursdays of team racing, with £1.8 million in prize-money, is a key summer attraction on Sky TV, several of whose presenters were rehearsing in the parade ring well ahead of the off time.

The competition, which was delayed for a year by Covid-19, was also a draw for racegoers and Newcastle executive director David Williamson said: "We're expecting around 1,500 people, which is double what we would get on a normal Thursday, and there'll be lots of kids.

"I'm looking forward to it and I hope the championships go down to the wire as the final day is back here in September. That would be really great."

Already studying the form not long after 3pm were Iain Torley from Workington and his wife Susan, along with their friends John and Joanna Gale.

"We're taking in the ambience!" joked Torley, though he admitted it was not the new competition – with jockeys racing in the colours of their teams rather than owners' silks – that had encouraged the group to make their trip.

"I'm not being negative at all but we're just here for a good day out at the races," he said.

"The team racing won't make a lot of difference. You get to know the trainers and the jockeys but I don't take a lot of notice of the colours.

"But it's good racing. I've seen the teams in the Racing Post and maybe it'll be good for those who don't know anything about racing, it might help them pick it up. And I'll definitely watch it at home on a Thursday night."

FIRST PUBLISHED 4:58PM, JUL 29 2021
Maybe it'll be good for those who don't know anything about racing, it might help them pick it up