Haydock braced for rain and frost ahead of bumper Saturday card 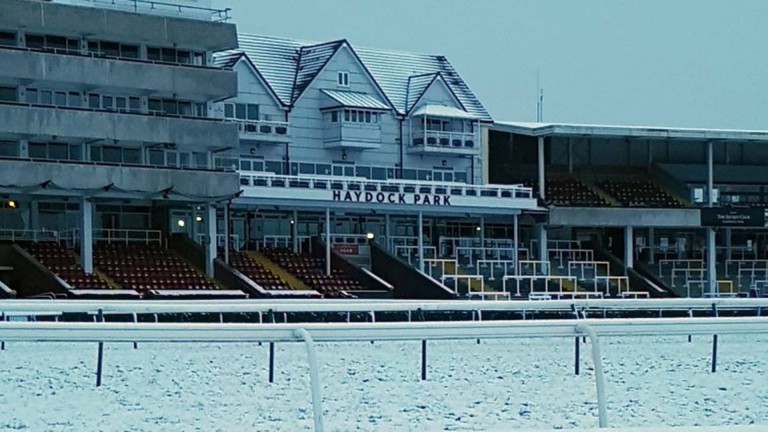 A bleak weather forecast is causing concern ahead of Haydock's high-quality meeting on Saturday, which is due to feature the return of dual Champion Hurdle hero Buveur D'Air.

Clerk of the course Kirkland Tellwright is facing a difficult week, with the possibility of significant rain followed by frost and snow on ground already described as heavy.

"The forecast is very wet for the next three days and then it gets a lot colder with some precipitation, which could fall in the form of snow on Friday and Saturday," he said on Monday.

"You could probably deal with them in isolation, but if we got two inches of rain followed by frost and snow, it would be a tall order. We'll tackle them in that sequence.

"We're in a good place now and the whole course will be covered by tomorrow [Tuesday] night. Even then we have to approach this with a degree of caution because quite a bit of the ground is cut up and it's ability to get through a frost is less than would be the case if it's virgin ground."

Buveur D'Air features among five entries for Saturday's New One Unibet Hurdle, for what would be a first start since finishing second in the 2019 Fighting Fifth Hurdle, after which he required surgery having returned from the race with a piece of wood in his foot.

The Nicky Henderson-trained ten-year-old's possible opponents include Song For Someone, successful on his last three starts including the International Hurdle, and last year's winner Ballyandy, with Navajo Pass and Ribble Valley completing the quintet.

Magners Cheltenham Gold Cup entry Royale Pagaille appears in the entries for the Peter Marsh Chase, while the Sky Bet Supreme Trial and Altcar Novices' Chase are other Grade 2 contests on a traditionally informative card.

Haydock's last meeting on December 30 was cancelled due to heavy snow.

FIRST PUBLISHED 4:23PM, JAN 18 2021
If we got two inches of rain followed by frost and snow, it would be a tall order

'We really need some rain' - Daly 'terrified' as dry ground hurts preparation 'He deserved a win' - track specialist Flint Hill does it again for Jefferson 'If I didn't have this place I don't know how I'd make it back' Can class-dropping Just Fine give King Charles his first winner? Shetland Bus drives Richard Newland stable out of 74-day winless drought 'It was the biggest ride of his career and he nailed it - beautiful to watch'