Latest THE HEAT IS ON 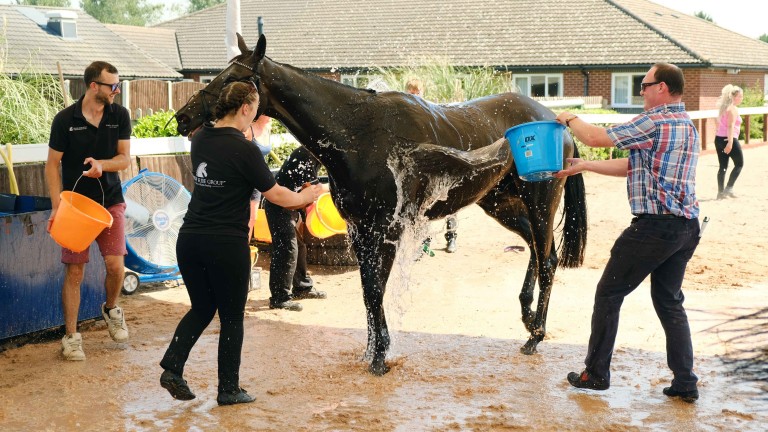 Record-breaking temperatures proved too much for British racing on Thursday as Southwell was forced to abandon its final two races despite efforts to minimise the effects of the sweltering weather.

Temperatures peaked at 35C at the course, prompting officials and horsemen to agree to cancel the remainder of the card. Stand-in clerk of the course Charlie Moore agreed that "common sense prevailed". 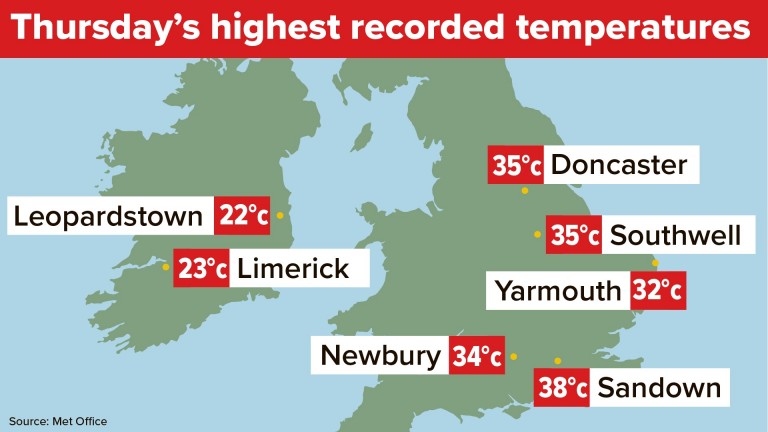 Racing at Sandown took place in even warmer conditions, with runners coping with 36C heat on a day that a new record UK temperature for July was set at 38.1C in Cambridge.

With Southwell clerk Paul Barker concentrating on equine welfare matters on Thursday, Moore was drafted in to assist at the meeting.

He said: “We knew today would be hot. They coped very well with the heat here on Tuesday when they put marquees up in the stables and the washing down areas to help keep the horses cool. They had a lot of praise for that so repeated it today and made the decision to bring the start of racing forward.

"When we started it was around 29/30C and everyone was happy for racing to start under those conditions. However, we constantly monitored temperatures and we noticed it was getting warmer by 1C per race and after the fifth race it was 35C and one or two people were saying it might be getting too hot to race. We thought it was right to hold a stewards’ inquiry at this point about whether racing should continue to go ahead.

“We agreed that we’d got to a point where it wasn’t wise to go on and in the end common sense prevailed on that front. Everyone at the course, to a man, saluted the efforts made by Southwell during the day.” 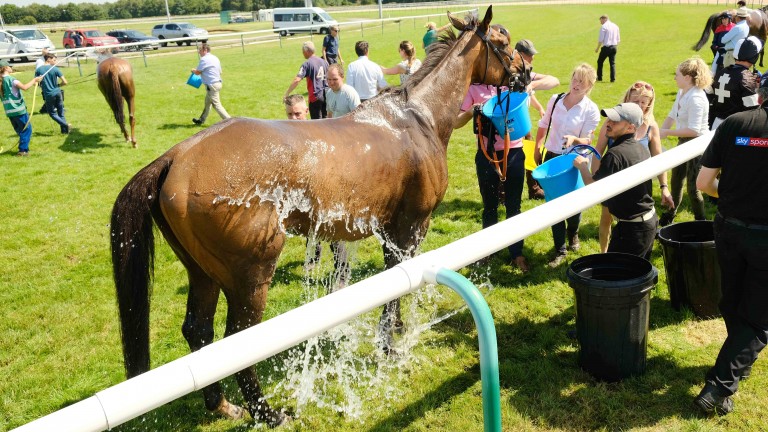 Horse being cooled down at Southwell
Tony Knapton / ProShot Photography

Fun in the sun

Those efforts, which included drafting in extra staff from Worcester to help cool the horses, were praised by horsemen. Trainer Alex Hales said: "Southwell have done a marvellous job – they've done everything they possibly can. All everyone cares about here is the horses."

Two horses were treated for post-race heat stress, a technical term for when horses exhibit signs of being hot, one of which had experienced similar symptoms before in colder conditions. Another was withdrawn for "overheating" after showing signs of colic on arrival at the track.

The BHA said decision to call off the end of the meeting at Southwell was taken by officials at the course and that conditions at other tracks, and judgements on whether to continue racing, were made on a case-by-case basis.

On the extreme conditions, an RSPCA spokesperson added: "It's vital that extra measures are taken to care for all horses in the heatwave and it is crucial that racecourses take steps to protect welfare in response to the extreme temperatures." 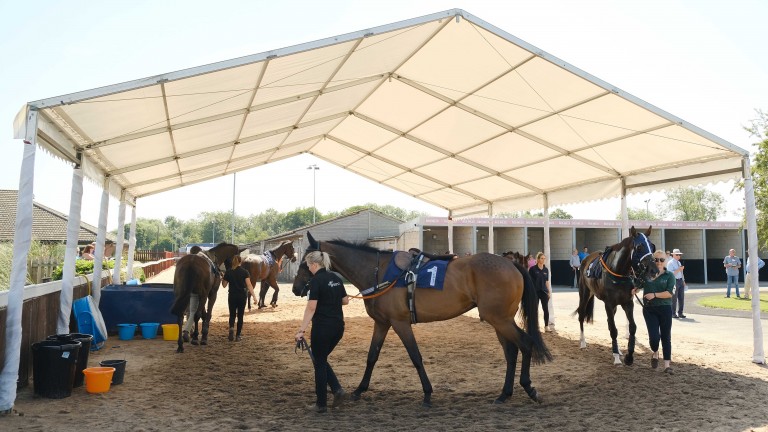 Reacting to the abandonment, trainer David Pipe, who had been due to saddle favourite Hot Ryan in the concluding 3m amateur riders' handicap hurdle, said: "Equine welfare is paramount and I believe the temperatures kept rising and rising."

Afternoon Flat fixtures at Sandown and Yarmouth reached their conclusions without serious impact from the weather but only after both courses put on extra measures to combat the heat.

The temperatures peaked at 36C at Sandown during racing, a raceday record at the track according to clerk of the course Andrew Cooper.

"I've been clerking since 1990 and have never raced on a hotter day," he said. "I've never raced above 34C here and today was the hottest in my time at either here or at Epsom."

Trainer Mark Johnston, among the winners at Sandown, was unconcerned by the heat, while countless jockeys told of riding in much hotter conditions abroad.

Johnston said: "They're hot weather animals and most of the time I think they love it. We take more precautions than most on a normally hot day. We put wet sheets on them and have always done that. We take precautions when we're travelling, which would be far more of a concern to me than on a racecourse. I'm not overly concerned - let's enjoy it."

Leading rider Oisin Murphy added: "I've raced in 44C in Caulfield and there's no issue as far as I'm concerned."

Horses racing in France faced hotter conditions than those in Britain, with highs of 42C recorded in Paris. Those competing in the Tour de France were at the mercy of even hotter temperatures, with temperatures reaching 60C during Stage 18 of the event.

Having already switched Longchamp's Thursday meeting to the cooler coastline of Deauville, France Galop decided to delay the meeting until temperatures started to fall.

Trainer Freddy Head said: "We’re going out a bit earlier in the morning in order to get finished earlier, while it’s still a bit cooler. We’re heading out at 5.30am at the moment.

"As for travelling the horses, my team for Deauville went up a little earlier than normal on Tuesday."

FIRST PUBLISHED 12:34PM, JUL 25 2019
Everyone at the course, to a man, saluted the efforts made by Southwell during the day

'Zeyaadah is the one to take from the race' - our experts on the Classic trials Samcro begins 'long road to redemption' on Monday with Galway Plate a target 'He's just the type for that Group 1' - our analysts with five horses to note Racing Postcast: reaction to Guineas glory for Poetic Flare and Mother Earth 'I've got four rides on Saturday and I've never even met anyone out there' Star horses, big races and key dates: your guide to the 2021 Flat season