'It's great to be back racing' - Gordon Elliott returns after suspension 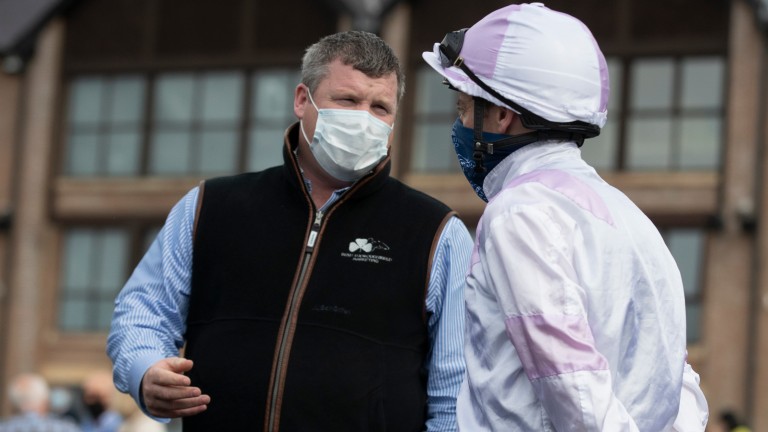 Gordon Elliott expressed his delight at being on a racecourse for the first time in six months after his first runner back from suspension was well beaten at Punchestown on Tuesday.

Oh Purple Reign, who was his sole representative on the card after the withdrawal of Alice Kitty later on the card, finished 12th of 14 in the mile handicap won by Khafaaq.

Elliott said afterwards: "It's great to be back racing and seeing faces I haven't seen in a long time. I would have obviously preferred if the horse [Oh Purple Reign] ran a bit better, but it's nice to be back.

"I have really missed coming racing over the last few months so I'm looking forward to getting back into that routine again."

Elliott has not had any runners since March 8 after he was punished following an Irish Horseracing Regulatory Board investigation into a picture of him sitting on a dead horse on his gallops at Cullentra House Stables in County Meath.

In his absence, the licence was transferred to Denise Foster, but the 43-year-old was free to make entries from last Thursday and was represented by Oh Purple Reign, a four-year-old gelding who runs in the colours of the Go Go Partnership.

Formerly with Richard Hannon in Britain, he joined Elliott last year and ran six times for Foster during his suspension.

Ridden by Declan McDonogh, the son of Sir Prancealot, who went off a 9-2 shot, was keen early, racing wide. He was nudged along by McDonogh and was in trouble turning for home, making no impression at the business end of the race.

A training sensation, Elliott was the youngest person to saddle the winner of the Grand National when Silver Birch obliged in 2007 and he was also responsible for the popular Tiger Roll, who triumphed in the world's most famous chase in 2018 and 2019.

Elliott has also been prolific at the Cheltenham Festival, winning the Gold Cup in 2016 thanks to Don Cossack.

However, he must now atone for a dented reputation following the emergence of the picture in February, which led to high-profile owner Cheveley Park Stud removing the horses they had with him.

Elliott has apologised for his misdemeanour, telling the Racing Post recently: "I made a mistake, I understand that, and I am sorry for what I did. A chance to move on is all I'm after now."

He also has four runners on Sligo's jumps card on Wednesday.

'It's daunting but exciting' – Denise Foster takes over from Gordon Elliott

FIRST PUBLISHED 2:37PM, SEP 14 2021
I have really missed coming racing over the last few months so I'm looking forward to getting back into that routine again