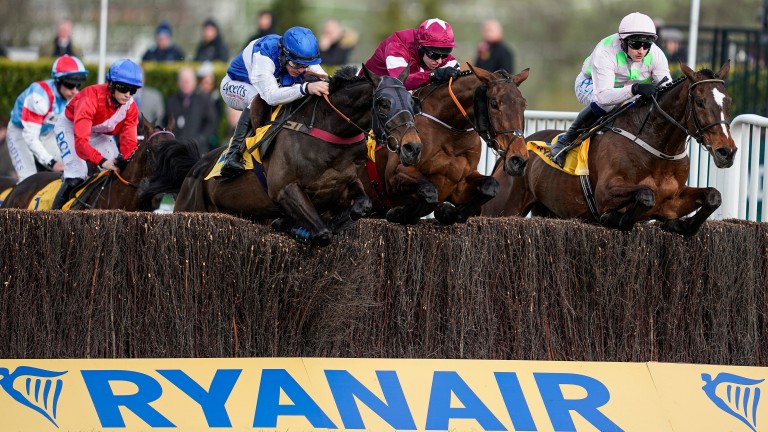 The Ryanair Chase: a possible contender to be the feature race on day five
Alan Crowhurst (Getty Images)
1 of 1
By Stuart Riley UPDATED 6:02PM, JUN 21 2021

Should the Cheltenham Festival move to five days in 2023 the overwhelming question is what would that look like? Here are some of the questions that need to be answered . . .

Well, the most obvious thing to do is take a race from each of the four current seven-race cards, add two more and plop them all on the Saturday. In reality it is more complicated than that as an extra day brings in a number of questions.

Which course would it be on?

There is an argument to pursue options one or three, as it is no small undertaking switching between tracks as a lot of rail has to be moved. But given the courses can get quite beaten up, especially if there is rain – and it is Britain in March so there usually is – giving the Old course two days to recover before being used again might work best. 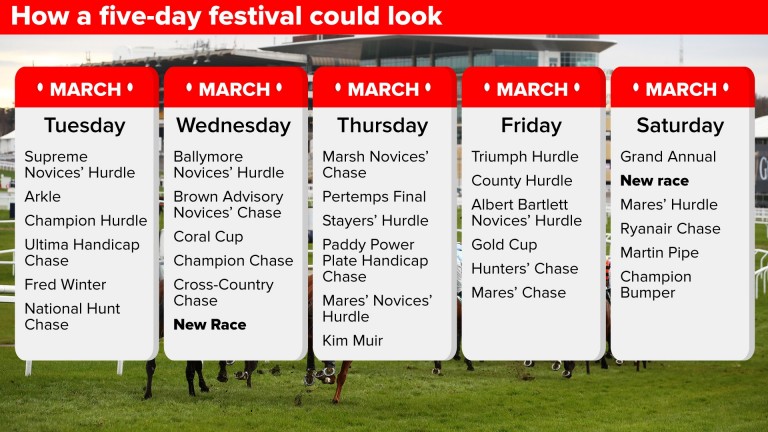 Which races would be moved?

This is up in the air. The Supreme, Arkle, Ultima and Champion Hurdle all very much have their identity on day one, so it makes sense for the race moved to be either the Mares' Hurdle, Fred Winter or the National Hunt Chase. The Mares' Hurdle has developed into a classy affair and could help bring some glamour to the fifth day.

The Grand Annual was moved to day two this year so is the most obvious race to move again, while if the fifth day is on the Old course the Champion Bumper is also a contender.

Day three is fairly obvious, the Ryanair Chase has had its status as a feature race overshadowed by going alongside the Stayers' Hurdle and it could take top billing on the final card.

Which leaves Gold Cup day. The main event and Fox Hunter look set in stone, but all of the other races are options. The Triumph and Albert Bartlett are perhaps needed to bring some class to the undercard, so the County or Martin Pipe make perhaps the most sense.

Which races would be added?

It is an age-old question with several obvious answers. There have long been calls for a two-and-a-half-mile championship hurdle race at the festival, similar to the Aintree Hurdle, while Sandown's wildly successful veterans' finale is often followed by calls for such a race at Prestbury Park.

The novice handicap, last won by Imperial Aura in 2020, was dropped to make way for the Mares' Chase which was added in 2021 and could easily be revived and given Cheltenham's desire to enhance the mares' programme a mares' bumper is another option.

FIRST PUBLISHED 5:00PM, JUN 21 2021
There have long been calls for a two-and-a-half-mile championship hurdle race at the festival