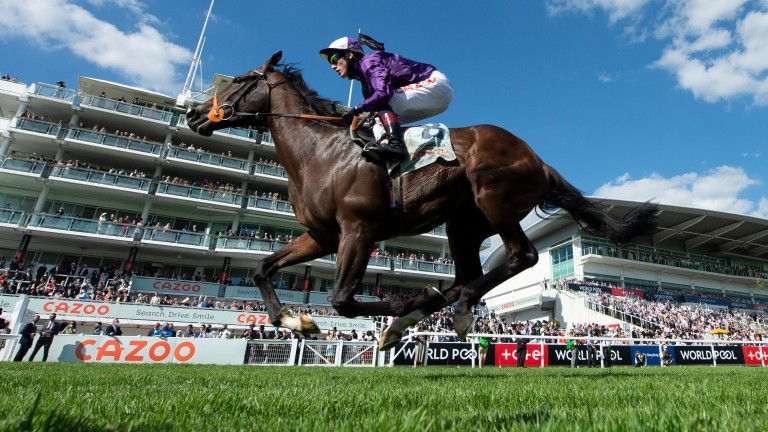 Derby runner-up Mojo Star will face just three rivals as he bids to shed his maiden status at the fifth attempt at Newbury on Saturday.

The Amo racing-owned star holds an entry for the Group 2 Sky Bet Great Voltigeur Stakes at York next week, but as trainer Richard Hannon exclusively revealed in the Racing Post's Front Runner, the aim will be to get a win on the board before a tilt at the Cazoo St Leger next month.

Hannon said of his three-year old colt, who runs in the opening 1m4f maiden stakes (1.15) : "We could have gone Voltigeur, but I think he's had enough of the extremely good races for now and it'll do him good to get his confidence and have a nice run round Newbury."

With regular rider Rossa Ryan ruled out through suspension, Mojo Star will be reunited with David Egan for the first time since the pair chased home Adayar at Epsom at odds of 50-1.

Mojo Star's odds at Newbury on Saturday will be nowhere near as big, with Hannon revealing some nerves despite the lack of depth to the race. He said: "It's an extremely good opportunity for him but I'm not gonna lie, I won't enjoy it much."

Motakhayyel was three lengths behind Danyah in sixth at Ascot last time, but bids to reverse that form with the Roger Varian-trained Laneqash completing a strong trio of chances for the owners.

Meanwhile, William Buick deserts D’Bai, who he rode to Group 2 success at Meydan last time out in favour of Godolphin’s other representative Al Suhail for Charlie Appleby. Pat Dobbs was on board when the four-year-old finished third in the Group 2 Summer Mile last month, with the two riders switching mounts.

James Doyle will be aiming to make it a fifth straight win for horses trained outside of France at Deauville in the Prix Guillaume d'Ornano (3.25).

Doyle takes the ride on the Charlie Appleby-trained Highland Avenue, sixth in the St James's Palace Stakes when last seen, with Philomene the other Godolphin runner in a race worth £203,571 to the winner.

The John and Thady Gosden-trained Derab, who has impressive form in the book having been runner up to Falmouth winner Snow Lantern on his seasonal debut, adds further strength to the British challenge.

Completing the raiding party is Dubai Honour, who beat subsequent Rose of Lancaster winner Foxes Tales at Newmarket last time out, and Tasman Bay, who will be partnered by red-hot jockey David Probert.

Oli Stammers: 'I can't really remember anything from the fall and the days afterwards'

FIRST PUBLISHED 12:19PM, AUG 12 2021
I think he's had enough of the extremely good races for now and it'll do him good to get his confidence and have a nice run round Newbury