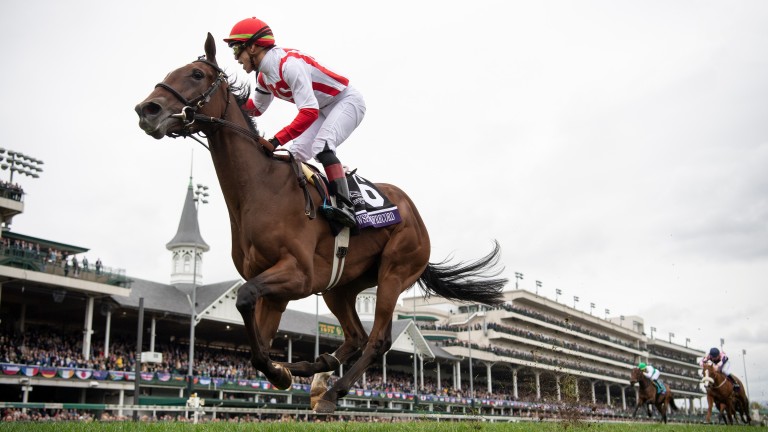 Runaway Juvenile Fillies Turf winner Newspaperofrecord, who stole the show at last year's Breeders' Cup along with Enable, is being targeted at the Coronation Stakes at Royal Ascot by trainer Chad Brown.

Brown committed the three-year-old filly, who has won all three career races by a minimum of six and a half lengths, to a British visit on a recent visit to the US by Nick Smith, head of communications and international racing at Ascot.

Her reappearance will be delayed with a view to peaking for the royal meeting.

Smith said: "We had a very encouraging meeting with Chad Brown and he's very keen to bring Newspaperofrecord to the Coronation Stakes, to the extent he is planning a prep campaign for her very much with Royal Ascot in mind.

"Her first race back will not be rushed. It will be on Kentucky Oaks day at Churchill Downs, and that will be her prep for Royal Ascot – so long as everything goes to plan.

"She really stole the show on the first day of the Breeders' Cup and it was very much a case of he feels this is a horse he can travel with. She's straightforward and has the class to compete – she'd have a very serious chance."

There are others in the pipeline, including the Breeders' Cup Juvenile Turf Sprint winner Bulletin, as Smith outlined: "I spent some time with Todd Pletcher and he's training Bulletin for the Commonwealth Cup – and he runs for the Winstar/China Horse Club partnership who also own Yoshida.

"I did speak very loosely to Bill Mott about Yoshida as a possibility for the Queen Anne, which he ran really well in last year, but he's going to Dubai to run on dirt, so we'll see how that goes first.

"Wesley Ward's building up a team. It's only at this time of year the likely juveniles begin to emerge and he has kept Bound For Nowhere in training with a view to coming for the Diamond Jubilee, although he is having a look at the Queen Anne as well."

Smith suggested NBC's broadcasting of the royal meeting had increased interest. He said: "The picture was very positive. We've had a lot of American horses over the last couple of years and I think without question the NBC coverage is raising awareness over there – the Saturday card was on the main network channel, which was a really big deal."

Smith is not just focusing on the US and is casting his net globally. "The key horse from Australia is The Autumn Sun and I've spent quite a bit of time talking to Chris [Waller – trainer] about that," he said.

"I think John Messara, who has a controlling ownership in the horse, still has some reservations about coming but we'll be catching up with him. There's plenty of time and I will go down there in April.

"Houtzen is pretty much definite to come; they're already making shipping and stabling plans. There's also Zousain, who was second on his comeback the other day; he is a strong possibility and Santa Ana Lane could come via Hong Kong."

A potential Royal Ascot run had been also mooted for the world's best miler Beauty Generation.

Smith added: "Hong Kong is still an early work in progress and Beauty Generation is clearly top of the list, but we're very conscious of the fact the Yasuda Kinen in Japan is a big pull, but it is very much the plan to follow up with him.

"Exultant is also a possibility and there are lots of sprinters out there – arguably at the top of that list would be Beat The Clock. They can make decisions very late in Hong Kong.

"This year, with the larger world pool operating between Ascot, the Hong Kong Jockey Club and the Tote, there is definite motivation for us to encourage a Hong Kong participant or two."

Almond Eye tops the wish list from Japan and Smith added: "As for Japan, I'm going to see the connections of Almond Eye in Dubai in a couple of weeks, and there are one or two others on the list, including some three-year-olds. There's still some work to be done there."

Read exclusive previews from 6pm daily on racingpost.com and the mobile app

FIRST PUBLISHED 10:15AM, FEB 27 2019
Her first race back will not be rushed. It will be on Kentucky Oaks day at Churchill Downs, and that will be her prep for Royal Ascot