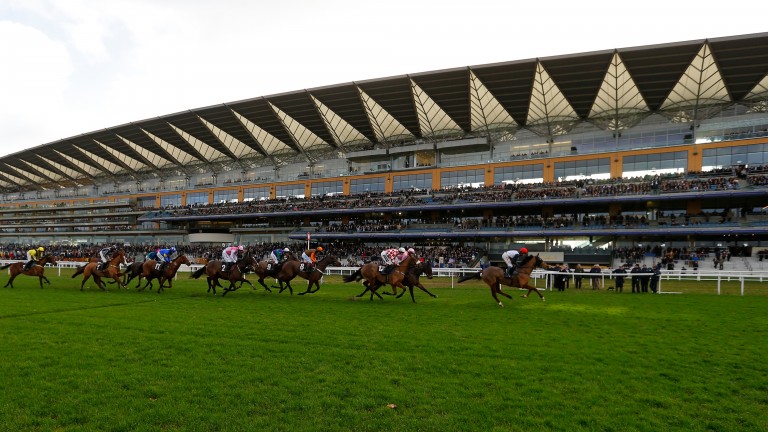 Jumpers pass the stands on the inner track last winter. The course could be used for Champions Day if the bad weather continues
Mark Cranham
1 of 1
By Graham Dench UPDATED 7:48PM, OCT 13 2019

The Qipco Champion Stakes and Saturday's two other races on the round course at Ascot are likely to be switched to the inner track for the first time under a contingency plan drawn up in 2016 to ensure racing takes place under the best possible underfoot conditions.

Ascot's outer track, which would normally be used for the fixture and for all others on the Flat, was on Sunday waterlogged in places after 30mm of rain over the weekend.

The inner track, left unwatered through the summer, unlike the Flat track, is good to soft, soft in places despite the deluge that has seen 134mm fall on Ascot since September 21.

After walking the track on Sunday morning, long-serving clerk of the course Chris Stickels described conditions as "the softest and wettest I've ever known them". 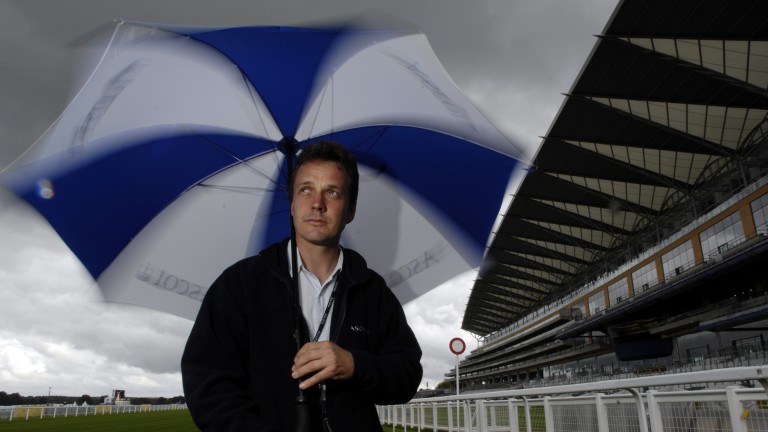 There have been fears concerning ground conditions ever since the concept of Qipco Champions Day being run at Ascot in the second half of October was first mooted.

However, when Frankel got the meeting off to such a sensational start by beating Excelebration by four lengths in the Queen Elizabeth II Stakes in 2011, it was officially good on both the straight and round courses, and it was good again in 2016 – an unusually dry year when the newly configured inner track would have been too quick for comfort.

Good ground is far from the norm though, and it was soft, heavy in places when Frankel ended his racecourse career with that gritty defeat of Cirrus Des Aigles in the 2012 Champion Stakes, and heavy, soft in places when his brother Noble Mission landed that race's 2014 running.

It has been heavy in places on the round course for the last two years but the races have been run on the traditional track.

Under the published race conditions a decision on switching to the inner track, which is essentially the hurdles course, would not be made until Friday at the earliest, and it can be made as late as Saturday morning.

With the round course already unraceable and little cause for optimism in the weather forecast, it will be surprising if discussions with the BHA are not brought forward so that a decision can be made much sooner.

Stickels, who joined Ascot in 2005 and has effectively been clerk since the track reopened in 2006 following redevelopment, said: "When I walked the track this morning it was the softest and wettest I've ever known it. It's heavy now on both the straight course and the round course, and the round course is waterlogged in places.

"However, we have a contingency to switch the round course races to the inner Flat course, which we had surveyed a number of years ago and which was trialled by Ryan Moore and Pat Smullen at the time. It's pretty much the hurdles course, and the going on that track is currently a mixture of good to soft and soft."

Stickels added: "We've had 30mm of rain since first thing on Friday morning, and 16mm of that has come in the last 24 hours. There has been 40mm of rainfall in the last week, and 134mm since September 21.

"I can't say now that we will definitely switch, and racing on the outer course on Saturday may yet be possible, but if we were racing today we would be on the inner course.

"The forecast might improve and we might end up with some better weather towards the end of the week, but I think the most likely scenario is that we will be racing on the inner track on Saturday as it looks like being wet most days and I can't see much improvement.

"In the circumstances, with uncertainty over which round track will be used, the BHA has confirmed that irrespective of the decision, penalties will not be applied to any non-runners withdrawn from round course races due to the ground conditions. We are most grateful to them for the flexibility shown, enabling connections to plan whilst waiting on the track decision." 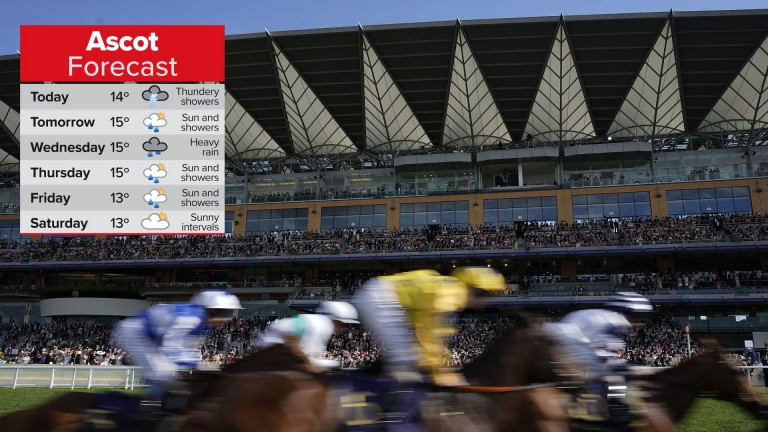 If the switch to the inner track goes ahead it has implications for start positions and distances. Stickels explained: "The mile-and-a-quarter start will move back a bit, and so will the two-mile start [for the British Champions Long Distance Cup won last year by Stradivarius], but the mile-and-a-half start is very near the bend and so the Fillies & Mares would be run over a slightly shorter distance."

When the inner track was tested in the autumn of 2016, Moore said: "We thought it rode very well, with no great difference from the other track. We'd have no issues going round there at all."

Smullen added: "The alignment is perfect and it rode beautifully. If we need to use it we'd have no issues riding around it."

The straight course is also unusually testing, but Stickels pointed out that it does tend to drain well and added that there had never been a problem with it.

Inner round course: Good to soft, soft in places

2018 Soft (heavy in places round course)

2017 Soft (heavy in places round course)

2015 Good to soft (soft in places round course)

2012 Soft (heavy in places round course)

FIRST PUBLISHED 12:31PM, OCT 13 2019
When I walked the track this morning it was the softest and wettest I've ever known it...the round course is waterlogged in places

Sussex Stakes next for 'exciting' Mohaather with Tregoning back in the big time 'He might be the best miler I've had' - Tregoning on Ascot winner Mohaather Newmarket latest: can Sceptical end Frankie Dettori's July Cup hoodoo? One key runner for each of ITV's nine races from Newmarket and Ascot Golden Horde out to strike again for Cox as Dettori bids to break July Cup duck Expert analysis and key quotes for the Betfred Summer Mile at Ascot