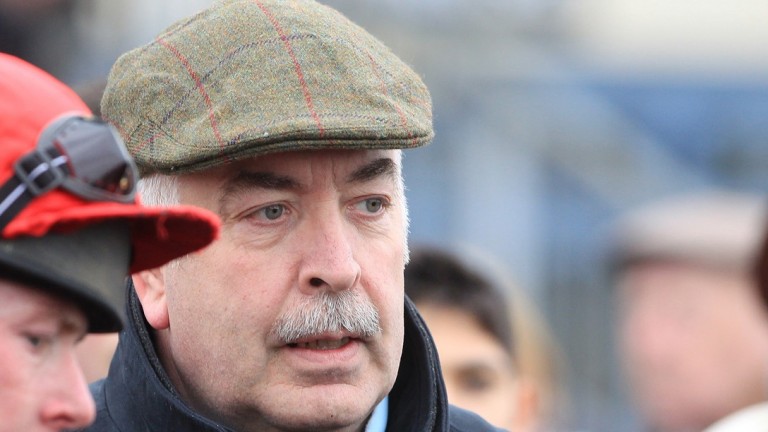 Barney O'Hare, whose Bar One Racing bookmaking firm will see 52 shops close while Level 5 restrictions are in place in Ireland
CAROLINE NORRIS
1 of 1
By Brian Sheerin UPDATED 7:57PM, OCT 20 2020

Bar One Bookmakers' boss Barney O'Hare's shops could still be shut when Fairyhouse hosts the showpiece winter festival that he sponsors next month but the leading layer has vowed to protect his staff while his 52 retail outlets remain closed over the next six weeks.

O'Hare had been gearing up for the Hatton's Grace Hurdle fixture on November 28-29, which features three Bar One-sponsored Grade 1s and will likely proceed as planned after it was confirmed on Monday night that racing would continue behind closed doors once Level 5 Covid-19 restrictions are implemented from Thursday.

While that fact was on Tuesday welcomed by Horse Racing Ireland chief executive Brian Kavanagh, who has also warned of the implications of betting-shop closures on media rights revenue, a dejected O'Hare, whose independent firm employs 350 staff, was putting on a brave face in the wake of a hammer blow that will see so many non-essential retail businesses forced to close for a six-week period, albeit the government policy may be reviewed in the interim.

"It's desperate but there are people who are much worse off," O'Hare told the Racing Post. "We just have to try and get through it and thank God we have the staff on board. The staff will be fully paid for the next six weeks and hopefully we'll have customers back in time for Christmas."

O'Hare added: "That's all we can aim for. We had been looking forward to getting back on a racecourse for the Hatton's Grace meeting at Fairyhouse but obviously we're not going to now."

Kavanagh did not play down the implications shop closures may have on the racing industry over the next six weeks.

With an increasing number of betting shops in England now closing as well, on top of those already closed in Wales, the shutters coming down on the 800-plus Irish estate inevitably puts a strain on the associated media rights revenue.

"The primary consideration has to be public safety. We have been racing for four and a half months now and it's great that we can continue," Kavanagh said. "Obviously the betting-shop closures in Ireland and in the UK will have implications on racecourses from their income point of view. There will also be huge implications on bookmakers and their staff."

He added: "I wouldn't underestimate the challenges ahead. We will engage with people and we are in the middle of doing budgets for next year. We will take stock of where we stand for this year first. I have said all along that the racecourse sector and businesses that rely on the racecourse sector are the ones who've been hit particularly hard.

"The sales have also been affected and that's another area we will need to focus on. When we are doing our budget for next year, we will take into account the impact that this is having on all of the various sectors within the industry and try and make the right decisions as we go forward."

FIRST PUBLISHED 11:54AM, OCT 20 2020
I wouldn't underestimate the challenges ahead. We will engage with people and we are in the middle of doing budgets for next year