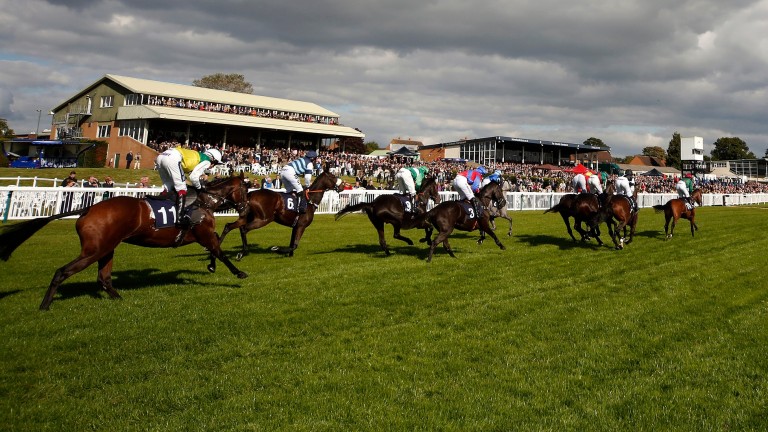 A new Hereford mares' chase series has been launched with a £30,000 final at the track on December 15.

The series consists of ten Class 4 races run over a variety of distances for horses rated 0-110 at tracks run by the Arena Racing Company and horses must run in one of the qualifying races to be eligible for the final.

The first race in the series is over 3m1f and, fittingly, will take place on Saturday March 10 at Hereford's annual ladies' day.

Jon Pullin, Arc racing director, said: "Arc is committed to helping support the mares' race programme and we hope this series will provide additional suitable opportunity for mares, as well as the chance to compete in a valuable final at Hereford in December.

"We hope the series will be well supported and will look to build on it in following years if it proves a success."

Rebecca Davies, executive director of Hereford, said: "In discussion with the BHA we want to continue to develop and enhance the race programme at Hereford to ensure competitive racing and create some feature days for racing fans to enjoy.

"I hope this series helps provide further incentives for owners and trainers to keep mares in training and that they will target the £30,000 final at Hereford in December to ensure an exciting conclusion to the series."

Nick Dartnall, BHA  race planning executive said: "The Hereford Mares' Chase Series is an excellent opportunity for those mares below the median official rating of 112 to be able to qualify and compete for a £30,000 prize in December.

"This series will provide an essential additional layer to the evolving mares' programme as a whole and we very much welcome Hereford's initiative to assist in further encouraging the participation of mares at all levels."

Trainer Henry Daly, said: "The series is a fantastic opportunity for mares with for some great prize money on offer for horses at the grassroots of the sport."

Michael’s colours were long associated with Lochranza, who posted 27 career victories, and the funeral will be held on Wednesday March 7th at St Margaret’s Church, Johnstone, Renfrewshire PA5 8RA.

Ladbrokes Coral shops to be converted into arcades

The move will be seen as a response to the government's plans to cut maximum stakes on fixed odds betting terminals.

The bookmaker said it had been granted three licences to convert three former Ladbrokes betting shops in the Midlands.

A Ladbrokes Coral spokesman said: "Betting shops are the bread and butter of our high street offering. As with any business, we are continually looking at ways to better utilise our estate, including a limited trial of reopening empty shops to improve our customer offer."

Ladbrokes Coral has the largest betting shop estate in Britain, with analysts at Barclays having estimated the bookmaker would face a £437 million hit to revenues should the government opt to reduce the maximum stake on FOBTs to £2.

A new defined contribution pension scheme for stable staff in Ireland is up and running and those stable staff who sent in their application forms in 2017 have received notification of their funds from Irish Life Pensions.

Stable staff who are eligible members of the scheme and who have not completed their applications are being asked to do so as soon as possible.

The scheme, which is aimed at providing a meaningful benefit at retirement for employees, is funded by a deduction from trainers' prize-money. Staff who benefit from the scheme do not need to make a contribution.

Trainers are requested to complete data returns for 2015 and 2016 to allow for further funding to be applied to their eligible employees' pension accounts for those years. New members may also enter the scheme for those years.

Margaret Davin, chairperson of the committee of management of the Stable Employees Defined Contribution Pension Scheme, said: "Although the scheme has taken time to set up, we urge all eligible members to complete their application form.

"The form should then be returned by post to the Committee of Management, c/o Irish Horseracing Regulatory Board, the Curragh, County Kildare.”

Alternative equivalent arrangements are being put in place for eligible stable staff in Northern Ireland through their mandatory UK pensions.

Toals.com Bookmakers are to sponsor the Leinster National at Naas on Sunday, March 11 for the first time.

The 3m €100,000 event, regarded as a trial for the BoyleSports Irish Grand National, has attracted 35 entries, with the weights headed by the Mouse Morris-trained Alpha Des Obeaux.

Gordon Elliott, who has made seven entries, said: “We’ll definitely run a few in the race. It would look a good opportunity to get a run into a few of them before having a crack at the Irish National.”

The Naas race will be a second National sponsorship for Toals, who also back the Ulster National at Downpatrick.