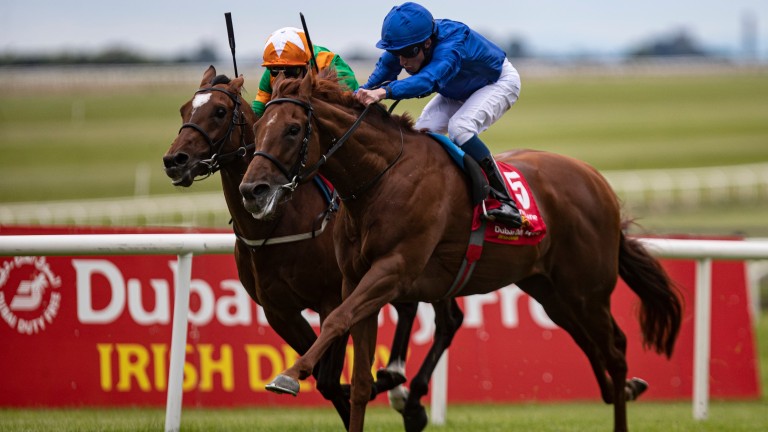 Martyn Meade thought the Irish Derby was in the bag and Frankie Dettori could not believe Lone Eagle had been beaten, but the trainer on Sunday expressed his pride in the Classic runner-up and raised the prospect of a crack at the Grand Prix de Paris next month.

The Ballylinch Stud and Aquis Farm-owned colt looked the winner from around two furlongs out, grabbing the lead and kicking clear, only for Epsom Derby third Hurricane Lane to power home late to score by a neck.

Meade watched the race on home soil due to Covid-19 restrictions and quarantine rules in Ireland and said he could see nothing but victory for much of the home straight.

Wow, what a finish this was to the 2021 Irish Derby

He said: "The important thing was he needed to jump out of the gates and Frankie got him in the perfect position. He cruised and cruised, then when he took it up two furlongs out I thought no horse could get past him now. I thought we had it in the bag – then sadly it all changed in the last 50 yards.

"Frankie was thrilled with the run and must have rung me ten times after the race. He was very enthusiastic about the horse, talking about where he could go next, but just couldn't believe he'd got beaten.

"He ran a blinding race and did us so proud. He's come out of it very well and it may just have helped us if the ground had been a little softer. It was pretty fast for Irish going and a little ease might just have slowed down the winner a bit."

Lone Eagle would be bidding to become the first British-trained winner of the Grand Prix de Paris since Beat Hollow struck for Henry Cecil in 2000, if he lined up next month on Bastille Day, July 14 at Longchamp. Aidan O'Brien has won the last three runnings with Kew Gardens, Japan and Mogul.

The three-year-old took his first experience of travelling overseas well, and has a relaxed demeanour at Meade's Manton stables.

Meade said: "He does nothing at home. He did a bit of work seven days before the Irish Derby and didn't do a tap. He was with a 90-rated lead horse and wouldn't go within ten lengths of him. You think, 'God how bad is this', but he steps up to the occasion on the track and it's much better to do that rather than the other way around.

"He's improving with every run and is a great character. We've been quite patient with him as he's fairly lightly raced and that's paying off in the long term as he can take his racing so well." 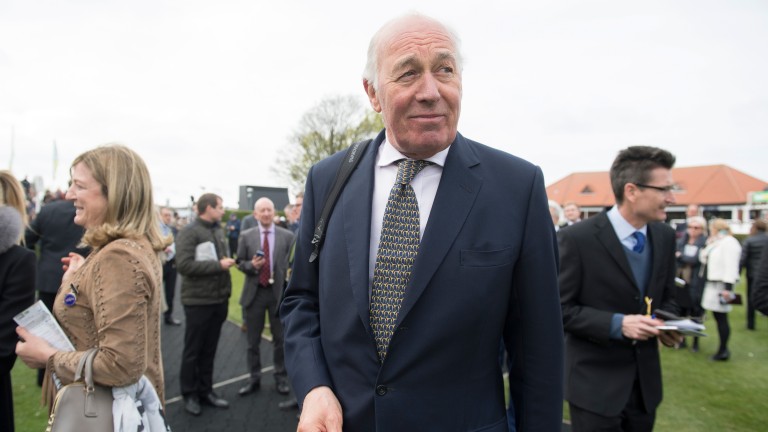 He added: "The Grand Prix de Paris would be a slightly quicker return than I'd like, but it's a possibility. There are the logistical problems of getting there too, but it would be an ideal race for him in a normal world.

"I've always thought he's a Leger horse but it may depend on who we would be taking on there. The ground might help us a bit later on in the year at Doncaster, but there may well be better options and he could be very good over a shorter distance as well."

Expert jury: how far can Hurricane Lane go after his Irish Derby triumph

David Jennings: there are smiles on people's faces and we haven't seen that in a long time (Members' Club)

FIRST PUBLISHED 6:30PM, JUN 27 2021
He cruised and cruised then when he took it up two furlongs out I thought no horse could get past him now

'No-one can cope with that volume of rain' - Sandown's evening card abandoned IRTA chief would welcome pre-race scanning by skilled horse people Racing greats gather together for charity bike ride in memory of Pat Smullen This time it will be tears of joy if Lady Bowthorpe can land famous Group 1 win Whether you love it or loathe it, the Racing League is ready to roll the dice All you need to know about the Racing League - starting at Newcastle on Thursday