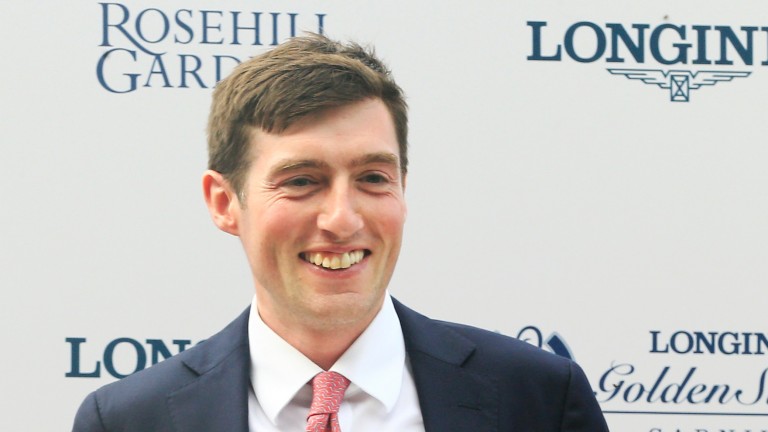 Harry Eustace: set to take over from his father at Park Lodge Stables
Mark Evans
1 of 1
By David Milnes UPDATED 9:50AM, SEP 15 2020

After three decades training in Newmarket James Eustace is planning to step down early next year when he is to be succeeded by his son Harry as licence-holder at his Park Lodge Stables.

Eustace snr has trained successfully at the town centre property, which once housed 1939 Derby winner Blue Peter, since 1990 but is to take a back seat after turning 60 earlier this year.

Harry, who has spent the last four years as assistant to William Haggas, still has two BHA training modules to sit but hopes to be ready to take over in January.

The 32-year-old said: "I've had a wonderful time with William and Maureen Haggas but have decided the pandemic was not a good enough reason not to start training. It's been long in the planning to take over from Dad and I'm very much looking forward to the challenges ahead.

James Eustace: to step down next year after three decades

"I went to Australia to work for Lee Freedman and Peter Snowden before enrolling on a course at the Irish National Stud. I was then assistant to Chris Wall and spent two years with Jeremy Noseda before going to the US to work for Christophe Clement where I ran a barn in Kentucky."

One of Eustace's most memorable days with the Somerville Lodge team was at Longchamp two years ago. He recalled: "When Sea Of Class just got beat in the Arc it was incredibly special and at the same time gutting.

"She'd overcome the draw and traffic problems to run a hell of a race behind Enable. Thankfully One Master popped up at 50-1 a bit later to win the Foret for us. It's a day I'll never forget."

Eustace snr said: "I turned 60 this year which is a bit of gamechanger and I've been training at Park Lodge for 30 years so it's time for a younger person to step in.

"All my owners have been informed and they are staying on board and are very positive about it. My other son David is also sorted as he's in Australia where he shares a licence with Cieron Maher.

"I know Harry has had other offers to set up in Australia himself after taking Addeybb over there this year but I'm delighted he's sticking to the plan. Frankly, it's his time."

FIRST PUBLISHED 9:37AM, SEP 15 2020
I've had a wonderful time with William and Maureen Haggas but have decided the pandemic was not a good enough reason not to start training

Record-breaker One Master retired to paddocks to begin new chapter