Pushing back: Goodwood to have police presence and high-visibility security 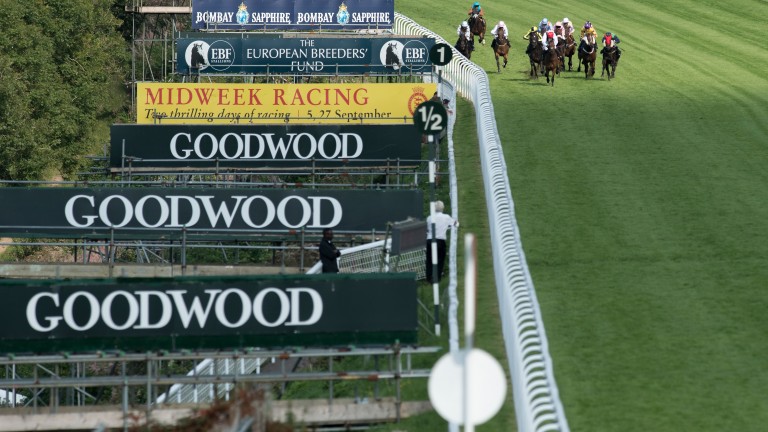 Goodwood, the venue for scenes that shocked racing this month when around 50 individuals were involved in a brawl, will have a police presence at every fixture for the rest of the season.

In addition, security teams will be better identified in high-visibility clothing and sniffer dogs will be deployed to combat drug use.

The response from one of Britain's leading independent venues comes just over two weeks after videos from the track's meeting on May 5 went viral, rocking the sport. They included a man lying on the ground being kicked in the head.

Alex Eade, general manager for Goodwood, said on Tuesday: "We have conducted a thorough and extensive review of everything that happened at our first fixture, of our existing policies, and held a detailed consultation with our safety advisory group and Sussex Police.

"We have also been working with the Racecourse Association and our other large independent racecourse colleagues to ensure we are part of the industry-wide crackdown on anti-social behaviour."

Goodwood's initial response to the problems at its first meeting of the season was heavily criticised, with many suggesting police numbers and the course's on-track security – particularly the use of officials not in high-visibility clothing but undercover – was inadequate.

Measures have been taken to rectify those issues, Goodwood outlined on Tuesday, 48 hours before the Sussex circuit hosts three day's of racing from Thursday to Saturday.

Racegoers have also be encouraged to use the existing amnesty bins for any prohibited substances, while random bag searches will continue at all entrances and anyone found to be in possession of drugs inside the venue will be removed immediately.

Goodwood continues to operate the 'Challenge 25' policy and, in line with other British courses, no-one can purchase more than four pints in the retail bars.

'People were scared and there were women screaming. It was wild'

Eade added: "We have concluded that we will make our security teams more visible, we have changed some personnel and the composition of our rapid response teams, as well as taking even stronger measures to discourage drug use and excessive alcohol consumption.

"Sussex Police have agreed to have a presence at each of our future fixtures and we continue to work with them on deploying other covert and overt methods of deterring anti-social behaviour and drug use. We are also still helping them with their inquiries following the incident on May 5."

Sussex Police said on Tuesday no arrests had been made regarding the brawl that broke out, but inquiries were ongoing, while in the aftermath of that incident – which was followed by fighting at Ascot seven days later – the BHA indicated it would pay increased attention to crowd control and security in the future licensing of racecourses.

Annual member Paul Coleman-Carrhad described the scenes at Goodwood as frightening. "This brawl happened some 20 minutes after I first became aware of the chanting/atmosphere in the bar," he said at the time.

"There was one security guard observing the fight from a distance, with many people asking the obvious question, 'where were the security or police?' The actual fighting was disgusting, with at times up to five men kicking a man prostrate on the ground."

At Ascot the following weekend two groups of men fought within the grandstand in front of fellow racegoers.

Goodwood to review its security after complaints fight went on unabated

Police seek witnesses to 50-man brawl at Goodwood on Saturday

FIRST PUBLISHED 5:24PM, MAY 22 2018
We have conducted a thorough and extensive review of everything that happened at our first fixture