Frankie goes to Hollywood? He very well might as filming starts on Dettori movie 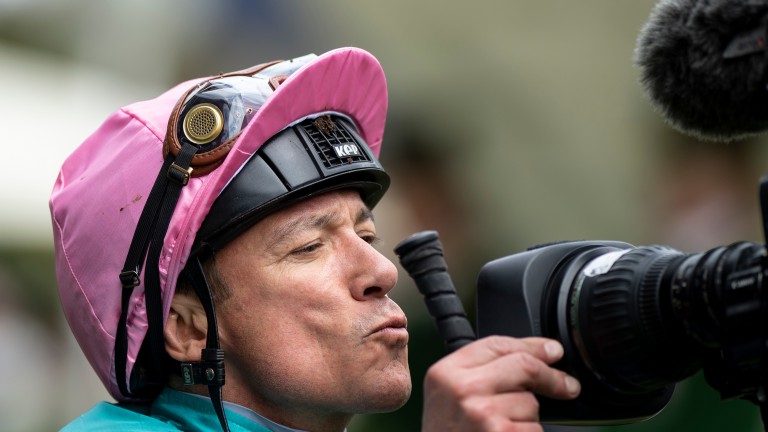 Frankie Dettori is set to turn up on cinema screens in a film about his life
Edward Whitaker (racingpost.com/photos)
1 of 1
By Lee Mottershead UPDATED 6:26PM, FEB 4 2020

Dettori's manager, Peter Burrell, has confirmed racing's most celebrated professional is to feature in a documentary film to be produced by Nick Ryle, who in 2015 was responsible for the critically-acclaimed Being AP, which told the story of Sir Anthony McCoy's final championship-winning season.

Initial work on the Dettori project began when Ryle and his team shadowed the rider in Paris on Arc weekend last year. The chronicling of 12 months in the sporting star's life is likely to conclude with another trip to the French capital city, where racing fans, Ryle and Burrell are hoping Dettori will be aboard Enable for a second crack at making history with a third success in the Prix de l'Arc de Triomphe.

The film crew will also follow their subject over the coming days, when he is due to entertain audiences in "An Evening with Frankie Dettori" show, firstly at Bolton's Albert Halls on Sunday evening and then at the Floral Pavilion in New Brighton, near Liverpool, on Monday.

Burrell, who will be interviewing his client of 33 years in the two theatres, said: "There are going to be 35 filming days. Royal Ascot is obviously set to be important and it would be amazing for the film if Enable makes it back to Longchamp.

"The unofficial working title is 'Frankie' and the film's likely destination will be streaming services, although I'm sure it will have a cinema release as well. It may end up as one 90-minute film or it could even be four one-hour programmes.

"We are thrilled the production budget has been agreed and green lit. We're hoping it will be a film of which racing can be proud. It will show the highs and lows of Frankie's career, with no stone left unturned. It's going to be very good indeed."

Burrell is also looking at securing a new sponsorship deal for Dettori, whose four-year association with Ladbrokes concludes at the end of the month.

"It has been an absolute pleasure to work for Ladbrokes and to be involved with all their staff and events," added Burrell, who plans to look at opportunities both inside and outside of racing, not necessarily involving bookmakers.

FIRST PUBLISHED 5:06PM, FEB 4 2020
It will show the highs and lows of his career, with no stone left unturned

Wonderful Tonight given green light for Lillie Langtry with ground to suit 'No-one can cope with that volume of rain' - Sandown's evening card abandoned IRTA chief would welcome pre-race scanning by skilled horse people Racing greats gather together for charity bike ride in memory of Pat Smullen Whether you love it or loathe it, the Racing League is ready to roll the dice All you need to know about the Racing League - starting at Newcastle tonight