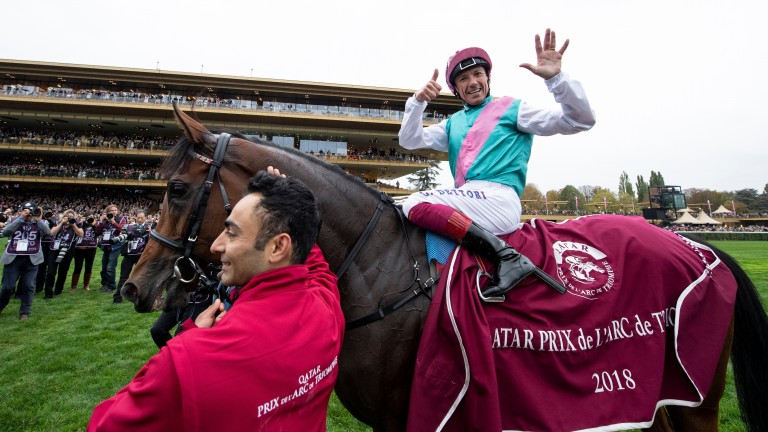 The story of Enable has been entwined with that of Frankie Dettori over the last four seasons and as news broke of her retirement, her greatest ally and fan paid an emotional tribute to the mare that has lit up recent seasons.

The three-time champion jockey said he cried when he was told the news that Enable's racing career was over.

"It's been an amazing journey for the last three and a half, four years," said Dettori. "The Arc this year unfortunately didn't work out. It was the worst performance of her career so I'm not surprised at the decision. She owes nobody anything, she's been an absolutely super mare.

"I did have a cry last night when I was told but more of joy than sadness because of all the great memories she gave me."

Dettori rode Enable in every one of her 14 Group 1 starts, with the pair emerging victorious on 11 occasions.

She became the eighth dual winner of the Prix de l'Arc de Triomphe in the race's 100-year history, as well as the first horse to win Ascot's prestigious King George and Queen Elizabeth Stakes three times.

Dettori said: "She is the horse that I've loved the most in all my career, she really touched my heart and I'm pleased that she bows out of the sport in one piece.

"It's very easy to say but she has got by far the best CV of any great horse that I've ridden. Her longevity and the performances over the last four years have been incredible."

Dettori will turn 50 in December and fully recognises that Enable emerged at a stage of his career when most top-class jockeys would have thought their best days were behind them.

She contributed five Group 1 victories to the Italian's tally in 2017, while in 2018 he was crowned Longines World's Best Jockey in 2018, a crown he would retain in 2019 after securing a personal best of 19 Group 1 victories.

"When I rode Golden Horn I thought, 'Oh God, I'll never get another horse like him' and then she turns up and she fills in the gap," said Dettori.

"Because she's been around for so long I've got very attached to her. I was tearful last night and of course it's emotional but today I went to see her and I'll always remember her for the good stuff."

Wondermare Enable retires: 'very few can match what she has given to racing'

Members' Club: 'The roar when the commentator called Enable hitting the front was palpable'

Members' Club: How to turn a great racemare into a great broodmare - what comes next for Enable

From Newcastle to Paris and Kentucky: how Enable conquered the world

FIRST PUBLISHED 11:10AM, OCT 12 2020
I was tearful last night and of course it's emotional but today I went to see her and I'll always remember her for the good stuff