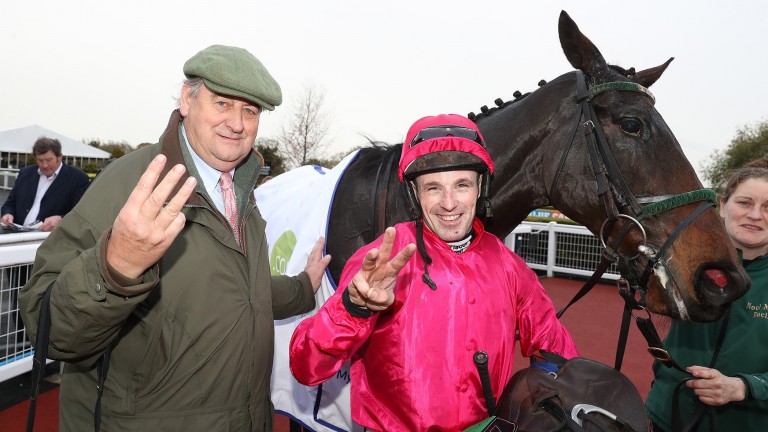 Noel Meade and Sean Flanagan after Snow Falcon scored at Down Royal on Saturday
CAROLINE NORRIS
1 of 1
By David Jennings UPDATED 7:47PM, NOV 7 2018

Noel Meade says the Ladbrokes Trophy is under strong consideration for Snow Falcon, although his theory that the Kerry National winner needs plenty of time between races could prevent him from making the trip to Newbury on December 1.

Snow Falcon has been chalked up at 10-1 joint-second favourite with the sponsors after being allocated 11st 5lb for one of the hottest handicaps of the season, but the race comes only four weeks after seeing off Shattered Love and Monalee at Down Royal – which could be too soon.

Meade said: "I knew 11st 5lb was about the lowest weight he could get after what he's done lately so that's not too bad. The one worry I have is I think he's better when he doesn't run too often. We kind of mucked up his season a little bit last year when we gave him a couple of quick outings on the Flat.

"Our plan with him this year is to just pick and choose our races a little bit more and give him plenty of time between each race. He now lives outside as well which seems to suit him very well. With regards to Newbury, he's probably a shade more unlikely than likely to run but we'll give the race serious consideration."

Willie Mullins, who ended Ireland's drought in the Ladbrokes Trophy last year when Total Recall pounced late to beat Whisper, has eight entries as he bids for back-to-back wins.

Al Boum Photo, who ran out in the infamous Growise Novice Chase at Punchestown with the race at his mercy, and Kemboy are the shortest Mullins-trained runners in the betting, which is headed by Nicky Henderson's Terrefort.

Thistlecrack sits at the top of the weights, where he also resides for the BetVictor Gold Cup on November 17, which would be the shortest trip Colin Tizzard's ten-year-old has tackled since March 2015.

The Mick Channon-trained Mister Whitaker and Henderson’s Rather Be have been installed as 8-1 joint-favourites with BetVictor for the £160,000 race at Cheltenham.

Looking ahead, Champion Chase winner Altior was among a stellar list of 33 entries for the 32Red King George VI Chase at Kempton on December 26.

Henderson said: “It's a speculative entry. We’ve always said we would put him in. He’s going for the Tingle Creek.”

Stablemate Might Bite is set to renew rivalry with his Gold Cup conqueror Native River in the Betfair Chase at Haydock later this month, with the pair joining last year’s 57-length winner Bristol De Mai among 14 entries for the first Grade 1 of the season in Britain.