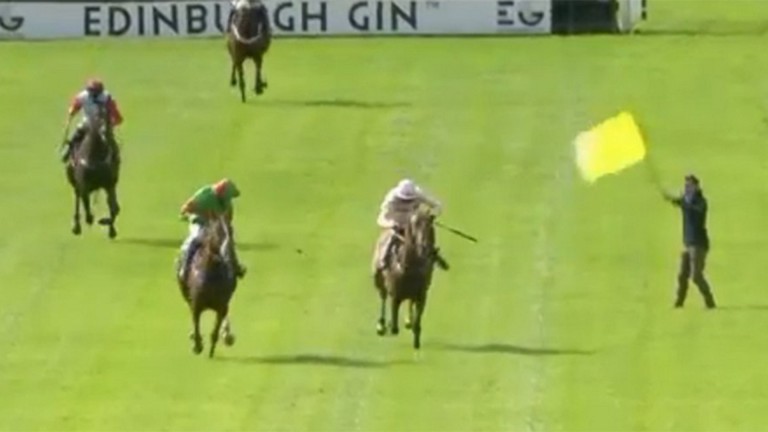 The stop-race flag was deployed after the final fence at Perth after the race was voided
RUK
1 of 1
By Ben Hutton UPDATED 7:54PM, SEP 11 2017

Eight-time champion jockey Peter Scudamore was scathing about the ten-day bans handed to three jockeys after they ignored a stop-race flag at Perth on Monday that resulted in the race being declared void.

Sean Quinlan, Grand National-winning jockey Derek Fox and Stephen Mulqueen failed to stop riding on the run to the line, close to where Johnny Go was being treated behind screens. Sadly, he suffered a fatal injury.

Three yellow flags were deployed, at the third-last fence, on the outside of the course by the last fence, and one after the final fence as runners made their way on to the hurdle course to cross the finish line, in so doing avoiding the water jump on the other half of the track that they negotiated on the first two circuits.

Peter Scudamore: "The only flag the jockeys saw was halfway up the run-in after the final fence"
Martin Lynch (racingpost.com/photos)

The jockeys seemingly saw only the final flag, as Mulqueen said: "The first flag I saw was the one after the last fence. When we watched it back on television there was a flag at the first in the straight [three out], but the flag person wasn't on the track and we didn't see it."

Mulqueen was riding for William Young but is under Scudamore's guidance at Lucinda Russell's yard, while Fox was riding the Russell-trained Miss Joeking.

Scudamore said: "Whatever the decision for the welfare of horses, jockeys people on the course, I accept that, but what I can't accept is how you can punish the jockeys.

"Officials knew the race was void turning into the straight, but the only flag the jockeys saw was halfway up the run-in after the final fence."

'They didn't consider the difficulties for the jockeys'

He continued: "So you've now got a flag halfway up the run-in, where are you meant to go? They can't go through the gap they're not meant to go through, are they going to go over the water?

"By delaying the decision they increased the chances of something going wrong, and they didn't consider the difficulties for the jockeys."

Quizzed as to whether he believed it was safe for the race to finish as normal, he answered: "Yes."

It was the responsibility of clerk of the course Harriet Graham to order the stop-race flags, and she said: "I stopped the race for the safety of the personnel by the screens."

BHA spokesman Robin Mounsey confirmed: “The decision to deploy the stop-race flag and where to deploy the flag operator is made by the clerk of the course.

“If any riders continue racing after they have seen the flag the stewards will then hold an inquiry to determine whether any rules have been breached, and will consider evidence from the jockeys and clerk of the course in these inquiries.”

'It was obvious the horse was injured'

Perth's chief executive Hazel Peplinski gave Graham her full backing, saying: "I'm fully supportive of my staff's decision, it was absolutely the right thing to do because safety is absolutely paramount for horse and rider, and the staff who were dealing with Johnny Go.

"It was obvious the horse was injured and blocking the chute into the winning post. The second time around they jumped the water jump there and we're still hoping at that point the race can be completed, because no-one wants to have to halt a race.

"Harriet delayed her decision in the hope she didn't have to, but once it was clear we had no other option she stopped it." 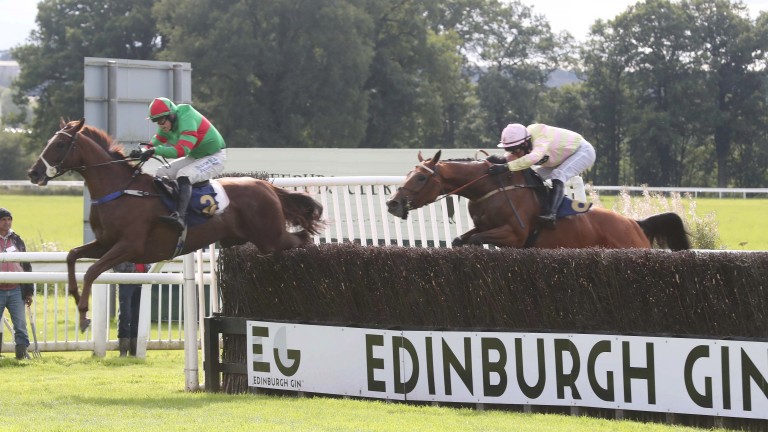 Red Giant, the first horse past the post, clears the final fence under Sean Quinlan before the stop-race flag was raised
John Grossick (racingpost.com/photos)

Peplinski added: "It's a very good rule – we have to have the ability to stop a race in the interest of safety. It would have been terrible to allow those horses to race past, and we saw one of them spook at the screens, which indicated completely that the race could not have been completed safely."

Here Comes Love was in third place on the run to the line but spooked and unseated Mulqueen, although suggestions he did so because of the screens up around Johnny Go – which would have been indicative of there not being sufficient room to finish the race – were disputed by his jockey.

Mulqueen said: "When they're waving the flag seven strides from the fence you can't exactly stop safely, and the flagman came out from the hurdle track and waved the flag in front of my horse, and he put his head up and spooked from it."

Asked if he believed it was safe to finish the race, Mulqueen added: "The boys in front went through, and I think there was plenty of room.

"When we all came in the boys in the weighing room knew with a circuit to go it would be void, and it should have been done a bit quicker."

Four of the nine runners pulled up, with two finishing, two unseats and one faller.

After a lengthy stewards' inquiry, stipendiary steward Adrian Sharpe reported: "The inquiry involved whether the first three jockeys, two of whom crossed the line, had seen the flag, and whether they ignored it. We decided the jockeys were in breach of ignoring the stop-race procedures – particularly the flags on the run-in – and they were each suspended for ten days.

"The yellow stop-race flag is well known to all jockeys; we felt it was clear to the jockeys the stop-race flag had been raised and that they had chosen to ride past. Once that flag has been deployed stewards have no option but to void the race.

"There were three flags, but the thing we have to remember is there doesn't have to be three, there just needs to be one."

Will Kennedy jumped the final fence on then fourth-placed Golden Investment but pulled up when seeing the last of the three flags and avoided a ban.

Asked for his views on the voiding of the race, Kennedy said: "It's a hard one but maybe the decision was a bit late."

Sky Bet paid out on the first past the post as a winner and voided the remainder of the market.

Killarney race declared void 20 minutes after it had finished

FIRST PUBLISHED 3:00PM, SEP 11 2017
What I cannot accept is how you can punish the jockeys