Crowley 'chuffed to bits' to be given the Sheikh Hamdan job 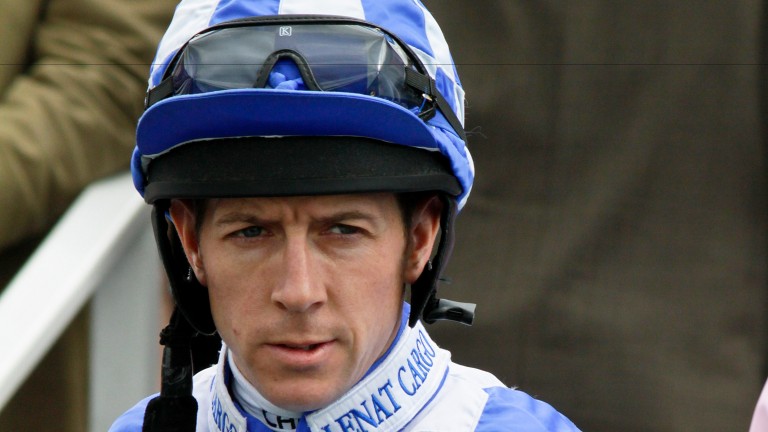 Better opportunities on the big days is the prime motive for newly crowned champion jockey Jim Crowley accepting a retainer to ride as number one to Hamdan Al Maktoum.

The former jump jockey has topped 100 winners eight times since switching to the Flat and is on 184 for 2016, but there are only three Group 1 wins on his CV.

After news of his appointment was revealed on Thursday by Sheikh Hamdan's racing manager Angus Gold, Crowley said: "This year I put in a lot of hard work to be champion jockey and probably sacrificed some of the bigger days.

"Every jockey wants to be riding in Classics and I’ve hit the crossbar twice, finishing second in the Oaks [on Secret Gesture] and the St Leger [on Talent]."

Although Crowley will have significantly less freedom as a retained rider, he jumped at the opportunity of the Sheikh Hamdan job, which had become vacant after dual champion Paul Hanagan was told he would not be having his contract renewed after four years as the owner's number one.

Crowley, who said he is "chuffed to bits" at his appointment, insists the retainer will not necessarily be a bar to him retaining his crown.

"I'm not going out there with the attitude that I can't be champion. Sheikh Hamdan has a hell of a lot of horses, but when I'm not riding for him I'd hope to be picking up other good rides."

Crowley, who won his Group 1s on Lord Shanakil, Prohibit and Madame Chiang, added: "I've got a great agent in Tony Hind, and hopefully I can keep going a lot of the contacts who helped me to the title this year when I'm not required.

"We didn't even think about it this year until after Goodwood – and it will be the same again. The most important thing though is the big days."

Hanagan's final year with Sheikh Hamdan was a disappointing one, but Crowley, who has ridden only one winner in the famous colours, reckons there are grounds for expecting a much better 2017, and he points out there is already an obvious Classic contender to look forward to in the Owen Burrows-trained Oaks fancy Talaayeb.

The jockey said: "Although they had a quiet year last year, a lot of horses in Newmarket weren’t quite right.

"They’ve got a lot of very nice horses. We haven't really discussed them yet, but there are a hell of a lot of them, and I know they're quite sweet on Owen Burrows' filly, who won at Newmarket at the backend. I’ve got to learn all about them and get as good a grasp as I can."

Crowley, who will take up his new position at the Dubai International Carnival, will stay in Sussex for the foreseeable future and explained: "It’s not too far to Lambourn, so that’s not a problem, and as the season gets busier I’ll spend more time in Newmarket. I was riding out twice a week for Hugo Palmer this year and staying overnight, and I’ll probably do the same.

"I’ve spoken to Hugo and he said he'd still love to use me when available. I don’t see any reason why I couldn’t be champion, but the most important thing is to keep Sheikh Hamdan and all his trainers happy."

Crowley hopes soon to be back in the saddle on the all-weather to ensure he is in peak condition by the time he goes to Dubai in the new year.

He said: "I was very sore for a few weeks. I didn’t just break my nose, I got a good kicking all over my body and my ribs have been very sore. I haven’t sat on a horse since, but the ribs are coming good now.

"I’m not going to come back until I’m 100 per cent as I want to hit the ground running, but you will see me on the all-weather before Christmas, and then I’m going to Qatar at the end of December to ride Scarlet Dragon for Eve Johnson Houghton. Then it will probably be straight to Dubai, which is the place to be in the winter and where Sheikh Hamdan has a very good record."

'Inspirational' Tylicki
In the meantime, Crowley will be paying another visit to Tylicki, whose attitude to devastating spinal injuries he described as "inspirational".

He added: "I saw Freddy in hospital on the night of the incident and I’ve been to see him since. I’ll call in again next week.

"His attitude is inspirational and hopefully he can keep that up and keep pressing forward. He’s a very special person and that will stand him in good stead."

He added:"These things happen and it’s probably more dangerous riding a bike round London. It’s a tough part of the game but it was just one of those things. It’s not going to affect me when I get back on."

FIRST PUBLISHED 6:56PM, NOV 24 2016
This year I put in a lot of hard work to be champion jockey and probably sacrificed some of the bigger days. I want more big races on my CV