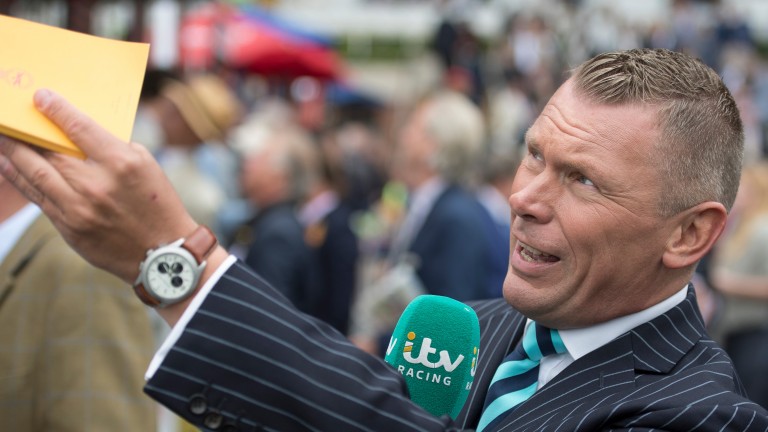 Matt Chapman: accused Coral of not wanting punters to win
Edward Whitaker
1 of 1
By Stuart Riley UPDATED 9:27AM, JUL 7 2019

Coral have hit back over comments made by Matt Chapman during ITV's coverage of the bookmaker-backed Eclipse day at Sandown on Saturday, in which the presenter labelled the firm "absolutely pathetic" for offering starting price (SP) only on legs five and six of any Frankie Dettori accumulators.

The firm, who were angered by the nature of Chapman's attack, cited the threat of spiralling liabilities on Frankie Dettori's mounts for the decision.

Chapman said on ITV: "Absolutely pathetic bookmaking from Coral restricting fivefolds and sixfolds today. Basically what Coral are saying is we do not want you to win. What a pathetic attitude from a bookmaker, they really need to grow a pair."

Spokesman David Stevens, who was subsequently interviewed on ITV by Chapman in which he defended the firm's stance, said: "To say we don't want punters to win is just wrong.

"At Royal Ascot we stood the bets and the industry as a whole got a real scare and we realised the scale and how quickly liabilities can build up.

"We have a duty to bet responsibly and manage our position. We have not turned away any bets today and we don't want to, they are good bets, but unlike in football accumulators when the money is spread, accumulators on Frankie build up liabilities very quickly on one specific outcome."

On the final day of Royal Ascot, bet365 and Sky Bet refused certain multiples featuring Dettori's rides, after the rider had ridden a four-timer earlier in the week.

Stevens said: "There would have been some firms that were simply unable to pay out their positions on the Friday and Saturday [of Royal Ascot] if it [Dettori winning all six races] had happened and we can't do business like that.

"Rather than not take business, we did what everyone suggested during Ascot. We're damned if we do, damned if we don't it seems. It is simply prudent bookmaking and gives us the possibility to manage such huge liabilities should they continue to build."

Coral sponsored all the races on a card worth more than £1 million. Dettori's mount in the first race, Rumble Inthejungle, was well beaten, but he ended up with a treble after wins for Mojito (4-1), Enable (4-6) and Falcon Eight (10-11).

Later in the broadcast Chapman praised Coral's backing of the  Eclipse. He said: "I should just say, having hammered Coral earlier, fair play for their sponsorship of this race. They have supported this race for a long time and have done a good job."

'She's a true champion' - Inspiral and Dettori bounce back to Group 1 glory 'I am delighted to win one' - Dettori weighs into team event with a victory 'The carrot was there, so we gave it a go' - Ward thrilled with prize-money 'We have the king and queen' - Dettori receives Verry Elleegant boost Blackbeard out of Phoenix Stakes as Bradsell tightens grip at top of market Stars everywhere you look as top jockeys from near and far headline Shergar Cup