Bill Elsey: Classic-winning trainer and a gentleman to the core 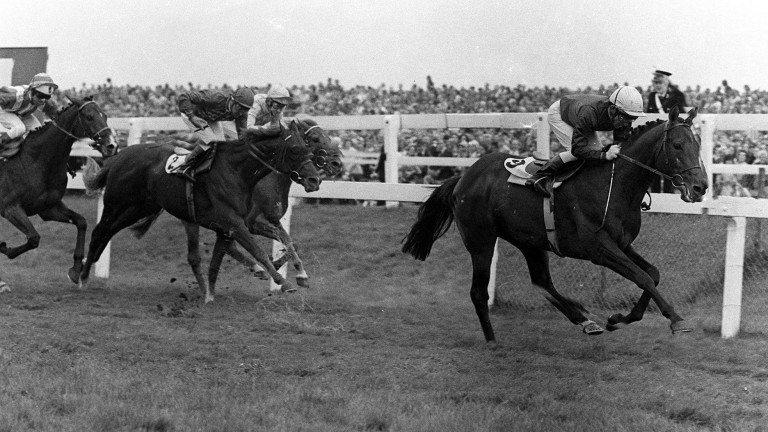 Bill Elsey held the distinction of training two Classic winners, a feat no northern-based trainer has bettered, although Mark Johnston has equalled the achievement.

The third generation of his family to train, in his younger days he preferred aircraft to horsecraft but after switching he proved a highly successful trainer, the highlights of his career being the wins of Pia in the 1967 Oaks and Peleid in the 1973 St Leger.

Charles William Carlton Elsey, always known as Bill, was born at Ayr on 8 December 1921. His grandfather William, who trained at Baumber in Lincolnshire, set a long-lasting record for a northern trainer of 124 wins in 1905 and his father Charles was one of the best trainers of his generation.

The young Bill would probably have started his professional racing life with Joe Lawson at Manton had it not been for the intervention of World War II. Instead he joined the RAF and flew a number of missions during the closing stages of hostilities.

After leaving the RAF he spent a year at the Royal Agricultural College in Cirencester, but a second attempt to become involved in racing came to a premature end when he left his post of pupil to Sir Noel Murless after only six months of a scheduled two years.

As a result, the young Elsey went back to his first love of flying, but after being heavily involved in the Berlin airlift of 1948-49 he decided the risks were not worth the financial reward and he turned to racing and joined his father Charles, who was then based at Highfield Stables just outside Malton, as his assistant.

At the time Charles Elsey had one of the most powerful yards in Britain. He had already won the Oaks and 1,000 Guineas of 1949 with Musidora, and later Classic successes came with Frieze in the Oaks of 1952, Nearula in the 2,000 Guineas a year later, Honeylight in the 1,000 Guineas of 1956, and finally with Cantelo, whose success in the 1959 St Leger came in controversial circumstances as she had been beaten at odds-on in the Park Hill Stakes two days earlier.

In 1961 Bill Elsey took over from his father and maintained the stable’s success. In his first season he sent out Jim Joel's Black King to win the Queen's Vase, and the same owner's Henry The Seventh dead-heated in the Cambridgeshire. The following season Phil Bull’s Sostenuto ran away with the Ebor Handicap.

His first Classic victory came in 1967 when Pia, ridden by Edward Hide – who had a long and happy association with Highfield – won the Oaks from St Pauli Girl, who was third when Pia dead-heated with Pink Gem for the Park Hill Stakes later that year.

Six years later Peleid, who earlier that season had won the Zetland Gold Cup and Magnet Cup, and was bred by his owner Bill Behrens just a few miles outside Malton, improved on anything he had achieved earlier and anything he was to manage later when he was ridden by Frankie Durr to a 28-1 triumph in the St Leger.

Elsey's Cambridgeshire dead-heater Henry The Seventh improved enough to triumph in the Eclipse Stakes, and other important winners for the yard included King Of Babylon in the Champagne Stakes, Lucaya in the inaugural Sun Chariot Stakes, Alignment in the Ebor, Tantivy in the Queen’s Vase, Double Cream in the Lincoln, Don in the St James’s Palace and Lockinge Stakes and Line Slinger in the Yorkshire Cup.

Alignment’s 1968 Ebor victory suggested he might be a force in the St Leger, but after being in front early in the straight he could manage only fourth to Ribero, just behind his stablemate, the filly Cold Storage.

In the mid 1970s Elsey began to train a few jumpers and had his first success in that sphere with Mark Henry at Newcastle in 1975.

The following season the same horse won a high-class hurdle at Ascot and the trainer took the Welsh Champion Hurdle in 1988 with Past Glories, whose owner’s son James Hetherton later took over part of Highfield and trained Past Glories to finish third in the 1990 Champion Hurdle.

As racing's powerbase began to shift south, Elsey's ammunition became less potent and his strike-rate started to diminish, but there were still results to savour like the successes of K-Battery in the Lincoln and Earl of Sefton Stakes and Linpac West in the John Porter Stakes.

Eventually the economic pressures of training a small string caused Elsey to sell his historic Highfield Stables to Past Glories’ owner Noel Hetherton, whose family had generations of horses trained there.

At one time there were three trainers at Highfield, with Elsey being joined by his son Charles (one of four children from his first marriage – there were six in all) and by James Hetherton, but Charles Elsey moved to Lambourn after a season and Bill Elsey’s retirement in 1996 ended almost 70 years of professional family connection with the yard.

Quietly spoken, scrupulously honest and a gentleman to the core, Elsey did not enjoy the same success in the last few years of his career as in his early days.

To no small extent this was a reflection of the changing times as many of his patrons were the smaller-scale owner-breeders who gradually drifted away as the top end of racing became increasingly monopolised by the very rich, whose allegiances were to the bigger yards in the south rather than to the northern outpost of Malton.

In his heyday, though, Elsey could match them horse for horse and, as with most top trainers, he had that great knack of turning many a sow's ear into a silk purse.

FIRST PUBLISHED 4:03PM, JAN 3 2019
He had that great knack of turning many a sow's ear into a silk purse