Latest ON THE SCORESHEET

Back of the net: Burnley players celebrate as Breathalyze strikes at Chester 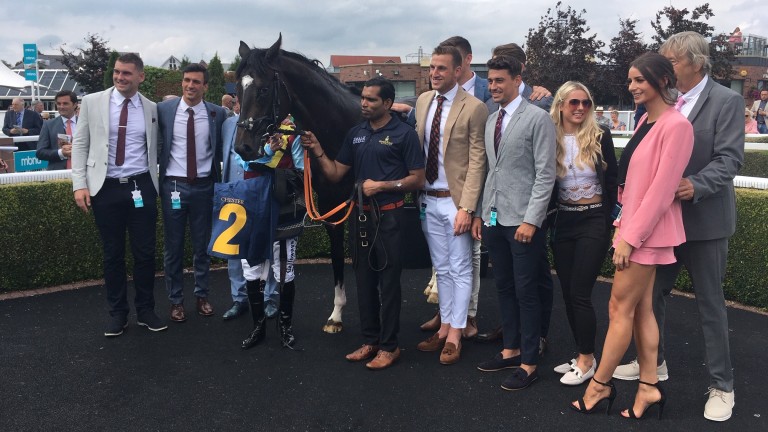 Members of the More Turf Racing after Breathalyze's win at Chester
Racing Post
1 of 1
By Andrew Dietz UPDATED 8:25PM, AUG 4 2019

The Premier League season does not start until next weekend, but half the Burnley team were celebrating a big result at Chester on Sunday.

The victory of Breathalyze in the 7f novice stakes was a first success for More Turf Racing, a syndicate consisting of Burnley players Jack Cork, Matt Lowton, Nick Pope, James Tarkowski and Chris Wood - plus former Clarets striker Sam Vokes, who is now at Stoke.

Cork, an England international with one cap, came up with the idea of the ownership group, who have two horses with Cheshire trainer Tom Dascombe.

Breathalyze, a two-year-old son of Bated Breath who cost £48,000 as a yearling, was the first to sport their claret, blue and yellow silks when third on his debut at Doncaster in June, while they also have an unraced No Nay Never filly.

Cork said: "It's amazing to get a win with our first runner on his second start and we've come here together with our families to have a fun day out.

"My wife Freya has had an interest in horses all her life and we thought it was a perfect hobby for us to do together. We started out with Archie Watson but didn't have much luck, so it makes you appreciate days like this even more.

"We're aware of all the hard work put in by trainers and stable staff and, like in football, you have to enjoy the good days."

All six players were in attendance at the track's family fun day and New Zealand international striker Wood added: "We're here with our families and we all backed him. The season kicks off next week so it's an exciting time."

The Dascombe stable has a major football link as it is part-owned by former Liverpool and England striker Michael Owen, who in the post-race debrief joked: "I'm a Burnley fan now!"

Burnley begin their season at home to Southampton, one of Cork's former clubs, on Saturday and of their prospects, the midfielder said: "We've had a good pre-season and we're taking this victory as a good sign for things to come."

FIRST PUBLISHED 4:27PM, AUG 4 2019
It's amazing to get a win with our first runner on his second start