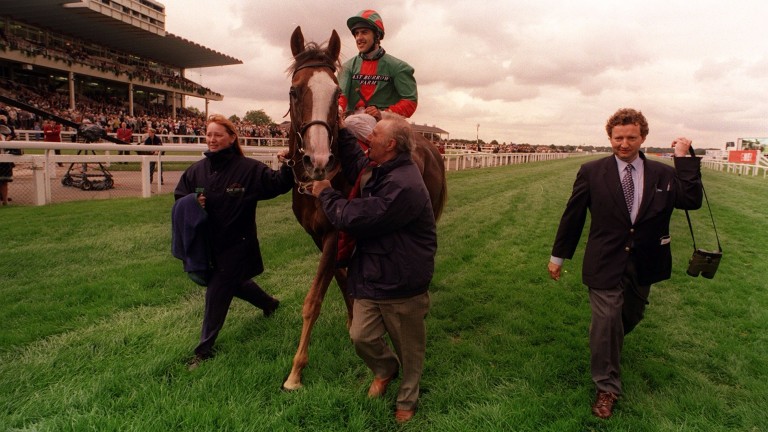 Double Trigger and Darryll Holland are led in after landing the 1998 Doncaster Cup
Edward Whitaker
1 of 1
By Ollie O'Donoghue UPDATED 3:27PM, FEB 24 2020

The 1995 Gold Cup hero Double Trigger, one of the best and most popular stayers of recent times, has died aged 29.

The son of Ela-Mana-Mou, whose name features three times on the Goodwood Cup roll of honour, initially retired to East Burrow Farm in 1998, and then moved to Clarendon Farm Stud in Wiltshire in 2010, where he stood for three seasons.

He died of a suspected heart attack at Clarendon on Sunday morning.

John Haydon of Clarendon Farm said: "Ron Huggins, who continued to be involved with Double Trigger throughout his life, bought him as a yearling, and he went on to become the top stayer of his generation, with the Ascot Gold Cup being the highlight of his career, trained by Mark Johnston."

Double Trigger was bred by Dene Investments out of Solac, a placed daughter of the Italian Oaks winner Soragna.

Solac bred nine winners from 12 foals including the Group 2 scorer Double Eclipse, who notably finished second to his full sibling Double Trigger in the 1995 Goodwood Cup.

Her other offspring include the black-type performers Solar Myth, Sol Symphony and Damask Rose.

Johnston posted a glowing tribute on his website, saying: "It seems that, no matter what champions I trained or might be lucky enough to train in future, I will always be remembered more for having trained Double Trigger than for anything else.

"He captured the public’s imagination like no other animal that I have been associated with, and rightly so."

He added: "His career as a stallion inevitably revolved around jump racing and he didn’t scale any great heights – few, if any, stayers do these days – but it was a long and productive career at stud with the couple who kept him in his retirement."

(£) Roksana providing business and pleasure for Nigel and Sarah Faulks