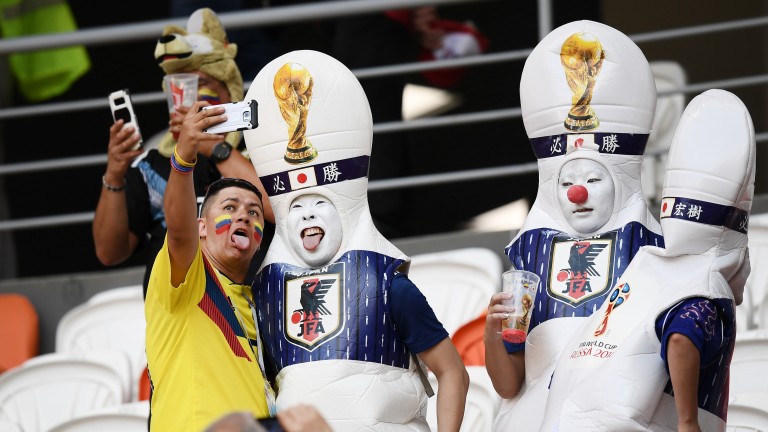 So far, so good. In fact so far, so brilliant. It has been an enthralling first week of World Cup action, with a surprisingly high number of excellent games, the Russian hooligans hibernating and the introduction of video refereeing failing to ruin things as completely as some of us had feared.

Spain v Portugal was one of the ten best football matches I have ever seen and helped ensure the tournament got off to a spectacular start, although not enough has been made of how unlucky Spain were and unless they were somehow stunned by Iran last night and had their key players crocked they and Belgium are my clear fancies to win the final.

But the likes of Mexico and Serbia have shown that the market leaders are not necessarily going to dominate the latter stages, especially as so many of the big guns failed to start with a victory, notably Germany, who were frankly rubbish against Mexico, and Brazil, for whom Neymar is playing solely to promote Neymar and Jesus continues to perform like someone whose reputation is bigger than his actual talent.

All those high-profile failures have helped continue a miserable period for the majority of football punters, for whom last season was a horror story. Those backers who tend to seek comfort in siding with favourites have never had it so good in terms of what to bet on and how easy to place their wagers but the results themselves have been brutally tough.

Harry Kane did strike a blow for the beleaguered punters with his last-gasp winner against Tunisia and the Three Lions are now between 10-1 and 12-1 to lift the trophy, which is comically short.

There is plenty to like about how Gareth Southgate and his players are behaving off the field, but, apart from an exhilarating start on Monday night, they toiled in trademark England fashion for much of the match and there are painfully few dangerous options on the bench to deploy when Raheem Sterling has one of his many off-games.

It is a woeful state of affairs that saddens and angers me that Wilfried Zaha is watching this with his mates at home rather than being in the squad to deliver his uniquely spectacular brand of dazzlingly productive attacking play.

It will go down as one of the biggest mistakes in the history of the England national team that this extraordinary talent was so foolishly discarded.

England have benefitted from a friendly draw and may well reach the last eight, but the defence looks to have a monumental rick in it, Kyle Walker is hideously uncomfortable in his position as the right one of the three stoppers, and when you see Ashley Young and Kieran Trippier standing over free kicks you realise how little threat England carry at set-pieces.

I hope they do well because it was fun to see videos of crowds of fans going nuts in Croydon, Leeds and various other locations when Kane nutted the winner.

The most heart-warming World Cup video so far, though, was the one of a classroom full of Uruguayan school kids screaming with joy and pouring into the sunshine when their late winner against Egypt went in. Football’s power to excite and enrich lives around the globe was captured perfectly in that wonderful clip.

Eight years ago it was widely predicted South Africa would be a terrible host, with wild fears expressed by various doom-mongers that visitors to the Rainbow Nation would be robbed before they had reached their hotels.

The same unfounded concerns remained four years ago in Brazil, but on both occasions the tournaments were a resounding success, albeit the ball they used in 2010, which became too floaty in matches played at high altitude, detracted significantly from the overall quality of the football.

This year’s pet concern was that foreign fans would have their heads kicked in by Russian yobs. But so far, unless there has been an old-style Pravda clampdown on truthful reporting, everyone seems to be enjoying a warm welcome, and long may that last.

So basically it’s all good, except, of course, for the lingering enemy of football, the VAR, which has offered regular glimpses of its capability to ruin matches without actually creating an almighty shambles. Yet.

Magical marathon provides everyone with a fantastic run for their money

We almost had one in Sweden v South Korea. There was a challenge in the Korean box, the ref played on and the Koreans broke with considerable menace, but to avert the possibility of a goal being ruled out because a penalty had been awarded at the other end the ref was told to blow pronto and then, after a review, Sweden were given a spot kick.

The one positive benefit of VAR ought to be something approaching the kind of level of consistency managers ludicrously desire, but the use of replays has been weirdly hit and miss, not least the failure to award England penalties for clear wrestling in the box.

It was also bizarre that a blatant slap on a Serbia player during a ruck with Costa Rica was not picked up, presumably because organisers are keen to minimise significant time delays and are therefore not being as thorough as they could be – a kind of VAR lite.

I still anticipate major chaos at some point, I still hanker for football to be played like it has been for a century and a half, and I am glad my prediction of a low offsides count is working out well.

But most of all I’m pleased that, despite rather than because of VAR, the first week of the 2018 World Cup has been so marvellous.

Quite apart from the quality of the football, the BBC and ITV output has been mostly terrific, and those trusty wireless stations BBC 5 Live and Talksport have been doing a grand job when it has not been possible to sprawl in front of the telly.

The overall quality of the studio pundits seems higher than ever and it has been particularly pleasing to enjoy the input of Alex Scott and Eni Aluko, who, as well as being armed with 242 England caps between them, have come properly researched and with a willingness to challenge the views of their sofamates in a way that has added a freshness to the punditry.

Aluko rightly did not hesitate to let Patrice Evra, who is 1-66 for the analytical wooden spoon, know he had called it totally wrong when claiming Costa Rica had been the better side in the first half against Serbia and it was the most dismal televisual moment of the tournament when Evra patronisingly applauded her for showing that, would you believe it, a woman could have intelligent, cogent views on football.

ITV just need to get Roy Keane to lighten up. We all know his role is that of smouldering bulldog, waiting to savage anyone for not showing enough bottle or whatever, but it is just sport at the end of the day, which is something Sky’s golf team could do with being reminded of.

Of all the things Sky have done well for the best part of three decades, their golf coverage is up there with the best.

It cannot be accused of being particularly innovative but it has followed a successful formula for many years and delivers what viewers expect with quality and authority.

But over the weekend a couple of their commentators lost the plot and completely exaggerated the issues that made headlines during the third round of the US Open, which was played in windy conditions and on lightning-fast greens.

The hysterical overreaction started when Phil Mickelson, who was toiling at the back of the field, putted his ball while it was still in the process of rolling down a slope away from the hole.  He knew he would incur a two-shot penalty but was so far back and is so wealthy he didn’t really care.

Yet the fuss his infringement generated was phenomenal, with crusty old blokes everywhere demanding he be disqualified, banned, fined and, most of all, feel thoroughly ashamed of himself, which he certainly wasn’t.

As a man who has watched his wife battle cancer is perfectly entitled to feel, he was in no mood to hang his head in shame and seemed perfectly calm in his post-round interviews, which just made the fogeys even more enraged, as if Lefty had thrown darts at a group of ducklings rather than simply saved himself a walk to his ball.

Meanwhile the leaders were approaching the closing holes, which were proving particularly treacherous, especially the 15th, the dancefloor of which was so rapid balls were careering off it and into the rough even when the approach shots had appeared perfect.

Players were going nuts in interviews, Sky were having to apologise left, right and centre for all the swearing that was taking place and the commentators were in full outrage mode, slamming tournament organisers for allowing the greens to get so slick.

The outrage reached a risible peak the following day when Sky’s main commentator Ewen Murray was discussing with Butch Harmon how much fairer the set-up was than the previous day, at which point Murray said he did not mind admitting he had been in tears when leaving the course after round three.

As losses of perspective go this was right up there with the best of them. Of all the hate and evil in the world, of all the reasons to truly despair and have a good cry, he chose the fact a green on a golf course was unusually hard to land a ball on.

We don’t want sports coverage to be completely trivialised because in its own weird way it is important to us, but there are limits to which we should care and hopefully the BBC and ITV World Cup teams will continue to bring us authoritative, insightful views while maintaining a nice blend of humour and lightness.