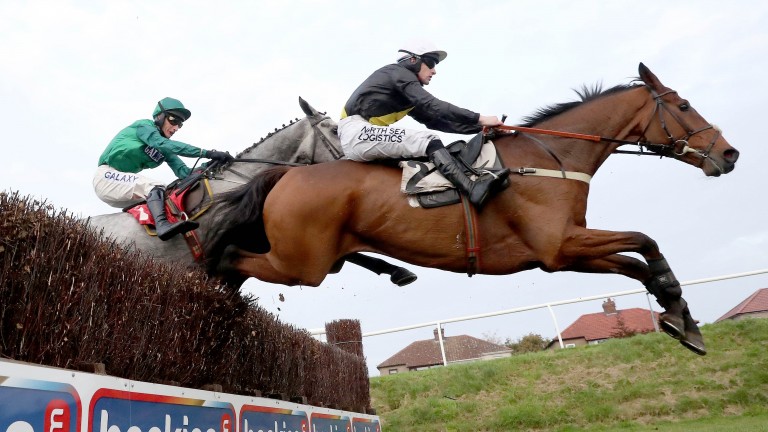 Seeyouatmidnight and Brian Hughes in winning form at Carlisle
John Grossick
1 of 1
By Bruce Jackson UPDATED 9:08AM, FEB 15 2018

Scottish punters with money in the bank after One For Arthur's first Grand National strike for their homeland in nearly 40 years look like having to rely on Seeyouatmidnight to repeat the feat this year.

With One For Arthur, who emulated the 1979 winner Rubstic in being trained in Scotland, recovering from injury there are just two Scottish-trained contenders.

Captain Redbeard, based with Stuart Coltherd also in the Borders, needs plenty of absentees to make the Randox Health-backed April 14 feature.

Seeyouatmidnight's in-form trainer Sandy Thomson, while phlegmatic about carrying the hopes of a nation, is bracing himself for a return to the media spotlight.

He said: "Yes it is exciting but it is what it is and we will go and give it a go. It's a slightly different scenario from last year's winner. I don't have the buying power – 35,000gns is the most expensive horse."

The spotlight did not work out well previously as Thomson admits: "The press onslaught got a bit out of hand ahead of Cheltenham when Seeyouatmidnight ran in the RSA Chase."

That was because Seeyouatmidnight had beaten this year's Grand National favourite Blaklion at Cheltenham on New Year's Day before finishing well behind him in his RSA triumph.

"I got things a bit wrong after that win. He got a bit of something and should never have gone to Cheltenham. He didn't run his race and I should have waited for Ayr."

Seeyouatmidnight went on to finish third to Vicente in the Scottish National and beat Bristol De Mai first time out last season at Carlisle before injury followed.

Explaining the ten-year-old's subsequent absence, Thomson added: "He had a bit of a suspensory injury but I have been delighted with him since he has come back – he's been in faster work since the beginning of January."

The acid test comes at Kelso on March 3 for his planned comeback which will decide if the planned journey on to Aintree happens.